Overcoming the Challenge of Famine and Disease in Africa

Dr. Lang delivered this presentation to the Schiller Institute’s international conference, “The World at a Crossroad: Two Months into the New Administration,” during the fourth panel on March 21, “The Challenge of Famine and Pandemics: The Coincidence of Opposites or Mass Extinction?” 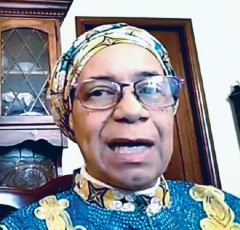 Dennis Speed (moderator): Dr. Joycelyn Elders referenced a project that the Committee for the Coincidence of Opposites is poised to initiate in the southeast African nation of Mozambique. This nation has 30 million, over 20 million of whom are below the age of 22. The person who has been instrumental in the selection of this project is our next presenter—Dr. Khadijah Lang. She is the chairman of the National Medical Association’s Council on International Affairs and the President of California’s Golden State Medical Association. Her presentation is entitled, “Overcoming the Challenge of Famine and Disease in Africa.”

Dr. Khadijah Lang: Good morning, afternoon, or evening, ladies and gentlemen. I am Dr. Khadijah Lang, a board-certified family medicine physician in Los Angeles, California, and the President of the National Medical Association’s [NMA] California branch, the Golden State Medical Association. The NMA is a medical organization for physicians of African descent in America that just celebrated its 125th year. It serves as a unified voice promoting the collective interests of physicians and patients of African descent, and a leading force for parity in medicine, elimination of health disparities, and promotion of optimal health not only here in the United States, but in Africa and the Caribbean as well.

NMA also has a Council on International Affairs, which I chair. The functions of this Council include establishing linkages between organizations of healthcare providers of African descent worldwide, providing when and wherever possible physical, technical, and intellectual resources to international physicians of African descent and their communities, and implementing or assisting in the implementation of pertinent items and resolutions concerning international affairs.

Golden State has been working with NMA’s Council on International Affairs for the last five years, taking medical missions to Mozambique annually up until 2020, when we were prevented from going due to the COVID-19 pandemic. This year, the country’s already-challenged healthcare system, which is not yet adequate to meet all the healthcare needs of its citizens, like so many of its fellow African nations, has been challenged by an overwhelming trilogy plus one. It is our hope that working together with a coalition with the Schiller Institute’s Coincidence of Opposites, we will be able to help make an impact on the devastation that has been wrought upon this country. And if successful, it will serve as an example to others of what we can do when we work together. There is an old African proverb that says, “When you want to go somewhere quickly, go alone. But when you want to go a long distance, gather a group and go together.”

The Situation on the Ground in Mozambique

According to the United Nations High Commissioner for Refugees, more than 530,000 people have now been displaced in the northern parts of Mozambique as a result of non-state armed groups. This number continues to rise daily, and with large displacements of people comes rising food insecurity. This food insecurity is currently being compounded by the after-effects of the red locust plague. In May of last year, during the height of the growing season, east and southeast Africa were besieged by billions of locusts. These swarms can swell to astronomical numbers of up to 70 billion. This year’s swarm was the worst seen in decades. Their voracious appetites consumed over 300 million pounds of crops in a single day, and led to widespread food insecurity across eastern Africa.

The situation in Mozambique has been further inflamed by the heavy rains and two cyclones in January and February of this year that caused flooding in the main basins of south and central Mozambique, which resulted in crop losses of up to 65% in certain areas.

A UN Office for the Coordination of Humanitarian Affairs report from February 2021 reports that over 950,000 people in Mozambique are severely food insecure. A household is classified as severely food insecure when at least one adult in the household has reported to have been exposed at times during the year to several of the most severe experiences described in the Food Insecurity Experience Scale Questions, such as having been forced to reduce the quantity of the food they eat, skipped meals, having gone hungry, or having to go for a whole day without eating because of a lack of money or other resources. Over 242,000 children there are suffering from acute malnutrition characterized by a nutritional deficiency resulting from inadequate food intake. The continuous blows to Mozambique’s agriculture, be it from natural disaster or human interference, have caused a debilitating lack of food in these parts of the country.

As a physician, I can state unequivocally that the health outcome for a patient who is malnourished is going to be sub-optimal, and will require greater resources to treat. Therefore, it is imperative that the nutritional status of these people is optimized if our medical interventions are to have a full impact.

This debilitating lack of food is made even more perilous as cholera and other water-borne illnesses run rampant among displaced people who lack access to safe water sources, and are now living in overcrowded spaces. Seventy-five percent of people in Mozambique do not have access to adequate sanitation, with those in Mozambique’s rural areas most greatly affected by this water crisis. The intersection of food insecurity, internal displacement, the global COVID pandemic, and a lack of safe water provides perfect breeding grounds for a host of diseases, a widespread public health issue, and greatly increased risk of disproportionate explosion of COVID cases there.

What We Can Do

As an example of what we can do, water can be purified with infrastructure, filters, or tablets. Given the transient nature of displaced people and the lack of statewide infrastructure readily available, donations of water tablets could have the biggest health impact on displaced people at risk of water-borne illnesses from a medical standpoint, including the risk of worsening their already high rates of malaria. Water tablets can be purchased in bulk, and usually purify up to 20 liters of water per tablet. They are easily portable, and relatively inexpensive when purchased in bulk. Each tablet could provide a family of four with drinkable water for five days.

Staple foods that are currently scarce or overpriced in Mozambique include corn, cornmeal, and rice. These are foods that are easily preserved, and well-suited to shipping and transporting throughout the countryside. These are foods that store well, and their longevity makes them ideal for displaced people who may be constantly in search of shelter. Furthermore, purchasing these crops from local farmers in the southeastern region could provide stimulus to the economy there, and reduce harmful effects on the climate by cutting out shipping and the greenhouse gases produced during that process.

A global pandemic requires a global response. It is my belief that we are stronger when we pull together, and that united, humanity could eradicate many issues. It is my hope that our small slice of humanity can pull together today and help ameliorate the food, water, and health crises affecting the famine victims and displaced people in northern Mozambique. Thank you for your time, and I hope that we can count on your support as well. If you would like to help with this project in any way, please contact the Committee for the Coincidence of Opposites by emailing lynnespeed@schillerinstitute.org and merrybkr@gmail.com.