The History of the Fight for theNew World Economic Order

Dennis Speed (moderator): We’re now at the conclusion of our scheduled speakers. We’re now going to transition to the Question and Answer period. But the way we’re going to do this, is we’re going to bring someone into the discussion who would have been here, if he could have been. His name was Fred Wills. He was the Foreign Minister of the nation of Guyana, also its Justice Minister. He was, more importantly, a very close associate in the actual struggle against injustice with Lyndon LaRouche. And injustice, specifically, of the economic variety.

He gave a very important speech in 1976 to the United Nations General Assembly, attempting to cause the policy of the International Development Bank [a proposal introduced by Lyndon LaRouche] to replace the looting policies of the International Monetary Fund and World Bank.

We put this in here, despite some of the problems of the video (which I will speak to in a moment), because, as we began and stated, this is the Committee for the Coincidence of Opposites. We’re going to bring Fred in because, actually, what he will tell you will do more to explain the circumstance that we are all in, all over the world, and are in, specifically, in the United States and other locations, than perhaps any other way of intervening.

I think, probably, Lyndon LaRouche would be appreciative that Fred managed to have his voice heard on this occasion in this circumstance. 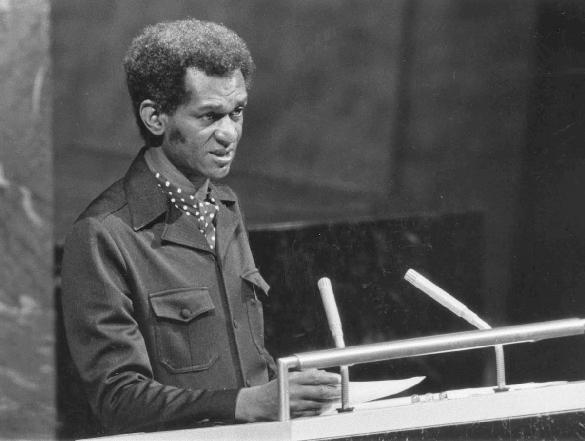 Frederick Wills: Four decades ago, when I was a student in Europe, we would meet, filled with the radical, missionary zeal of youth, wanting to see the old world go spinning down, as the poet said, spinning down the ringing grooves of change, to a new economic order. We believed, in those days, and we still do, that life is the fundamental essentiality of natural processes. Life has to come into existence, life has to survive, life has to grow, life has to develop. We were sure then, and I am sure now, that assumptions of present existence are unacceptable….

I must pause and ask you to bear with me while I remember those who have fallen in this fight for a just, new economic order. There are many of them, but in particular, I want to remember Indira Gandhi, Gamal Abdel Nasser, Kwame Nkrumah, and Marshal Tito, whom I met, as pillars of what we call the Non-Aligned Movement. They’re dead, and as the poet said, “they shall grow not old, as we who are left grow old. Age shall not weary them, nor the years condemn, as the going down of the sun, and in the morning, we shall remember them….”

There are three outstanding events I want you to recall, that happened after the Second World War. Three outstanding events. Generalized technological advance to the form of the nuclear age. That was very important. Secondly, there was a proliferation of new states in the world. I give you one example: In Africa, there were three independent states in 1939. In 1987, there are now fifty. There’s an immense Balkanization of Africa, and by and large, they created, not nation-states, but what I called “state-nations.” They deemed you to be a state, and therefore, a nation.

The third thing, and that’s why we are here—and these are all connected—is the establishment of the Bretton Woods system, in a little place in New Hampshire where they met in 1944, and concluded treaties by 1946.

I want to tell you this: that being a living part of the decolonialization process, one of the terms of the British, and French, and Dutch, and German and Belgian withdrawal from colonialism, was, that you must join the Bretton Woods system. That was one of the terms. You did not get independence unless you agreed to do that. It is one of the silent, unspoken premises of alleged independence….

But we were sovereign, we thought. Sovereignty meant sovereignty. And then I had a phone call in 1971 from a secretary in the Ministry of Foreign Trade, which hat I was asked to wear, by a heartless Prime Minister. I had big responsibilities in the post. The phone call said, Richard Nixon, Richard Milhous Nixon, to be quite precise, has taken the dollar off the gold standard and “let the dollar float.” It used to be $35 an ounce. It shot up to $800. What that meant, of course, was massive devaluation, because we were, at the time, two Guyana dollars to one U.S. dollar. That was the rate of exchange.

The important thing is, that the IMF handled credit systems, and it was bound to be a balance-of-payments disequilibrium, between export receipts and what you imported, and your total need to fill the gap. You needed credit, and the IMF controlled that—a kind of collective colonialism, more calloused than the colonialism that preceded it.

You all went there. And you were subjected to conditionalities: “Devalue; cut government spending.”—You’ve heard this before—“fiscal discipline, untrammeled free market.” In response to which I once told an American ambassador that I must check with my ancestor, because he seems to have suffered terribly from an untrammeled free market system. He was a slave.

“Don’t ask for all of the sophisticated technology” that Lyndon LaRouche has been speaking to us about. “Take the California maxim: Do your own thing. Burn peat. Burn mud and wood. You know. Import cosmetics. Don’t import medicines.” Things of that kind.

So, I reminded them again, that slavery itself was “appropriate technology.” And we had enough of that. It fell on deaf ears.

I was marked by my very good friends, the British, as a person who is never satisfied. Well, I’m never satisfied, so long as a single human being has to live in degradation. So long as we go spiraling down the corridors of ruin, I shall not be satisfied. And that’s why I am here….

I went to the UN and I asked for the International Development Bank. I asked for a debt moratorium. I asked for a rescheduling and restructuring of debt—a program. I was told I was a lunatic. My friends abandoned me. The Russians called me pro-American, and the Americans called me pro-Russian. The Non-Aligned group thought I was too big for my britches. My President thought I had embarrassed him. So, I gave him a book on dialectical economics to read. He said he read it, but I have my doubts. He had a nominalist problem.

I knew then that it was a question of time—and I had to be prepared for it—when I’d lose my job. My problem was how to maximize my actions, while I lose my job. I gave them a good run. I enjoyed it….

We cannot remain passive in the presence of impending catastrophe. Our intervention, as exemplified by this conference, must be based on Reason. The choice of action by Reason, over action by feelings and appetites, is not a mere “choice of options,” a word they like in the halls of leadership these days. When Reason is ignored, the forces of nature serve up terrible reminders. Terrible. Just re-read the history of the 14th Century.

We must have confidence in new technologies that illuminate man’s horizon at the moment, and all development. The pathways to development must be consistent with scientific principle.

Poverty, starvation, famine, disease, recession, depression, are not culturally ordained. They are not the permanent pillars of cultural relativism. Stop going down to the Third World, where 80% of mankind lives, and telling them that is your way of doing things. Stop that! Stop carrying Racine and Molière. Carry Pasteur and Madame Curie.

We must not and cannot allow the growth to degenerate into a pandemic wilderness. I say to you: We cannot furl the flags of human progress. That is what this conference is about. Once again, we are met to establish a new monetary system. We are not here to repeat the mistakes of the old. Above all, we are not here to deify, hallow, the assumptions of the old system. We are here because we know that mankind need not remain passive in the face of impending doom.

But if we don’t do it, there’s nobody left to do it. We are the thin, red line, standing on the lip of progress. If we lose, it’s not personal battles and personal tragedies. It’s a decision about whether mankind on this planet has a future. I therefore ask you, in the name of those present, in the name of those departed, who’ve been in this fight now for a new economic order and new monetary systems and new mechanisms of credit, I ask you not to let us fail again….

Speed: Thank you, Dr. Wills. You know, there’s a term that some people remember. It’s from the book, Shadows of Forgotten Ancestors: “Oh, we don’t believe in forgetting the ancestors.”