To Help Solve World Hunger,Break Up the Meatpacker Cartel

Nicole Pfrang provided these remarks to Panel 4, “The Challenge of Famine and Pandemics: The Coincidence of Opposites, or Mass Extinction?” of the Schiller Institute’s March 20-21 international conference, “The World at a Crossroad: Two Months into the New Administration.” 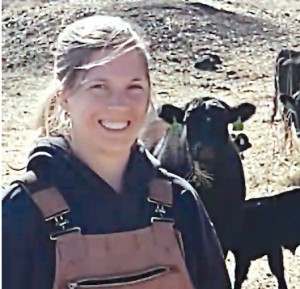 Hi! My name is Nicole Pfrang. I am a 5th generation cattle rancher in a little town called Goff, Kansas. I just got done tagging calves; we’re in the middle of calving season. Before that, we sorted off some replacement heifers we’re going to sell. We also have bulls we’re ready to turn out for springtime. I am a college graduate from Kansas State University; I got my degree in Animal Science—the Production Management option. I’m also the Secretary of the Kansas Cattlemen’s Association.

Along with this whole food shortage and world hunger issue, the big part that I see is how the meatpacker cartel completely controls everything: who gets the food, who buys it, and pretty much makes us producers jump through hoops. They say, if you don’t do this, we won’t buy your beef. My dad remembers back in the day when there were about five or six packing plants. They would flip a coin to see who would bid first. Now, the meatpacker says, “Can you get it to us? I’ll give you a price in two weeks.” So, they pretty much control the price. It’s just ridiculous.

They also control—with regulations, they can slip money into lobbying organizations and government so that they can get what they want. USDA [United States Department of Agriculture] listens to the meatpackers. There’s a lot of legislation going through to try to get small packing plants to be able to sell across state lines, because these are inspected plants, that are as strict as the federal, but that are state-inspected. The big packers do not allow the small packing plants to sell across state lines.

There’s a local packing plant that’s close to us that is not far from the Nebraska border. They cannot sell into Nebraska. This [legislation] giving the smaller packing plants more wiggle room, more rein, it’ll help the consumers’ ability to choose what meat products they get.

The big four packing plants are now going into this whole fake meat. They’re wanting to get rid of beef entirely. They got rid of the big thing that helps the consumers choose—country-of-origin labelling. They said, “We don’t need that. The consumers don’t need the right to choose where their meat comes from. We’ll just buy all this meat from 20 different countries, and mix it with our meat, and label it ‘Product of USA’.” They know the United States product is what sells; it’s what the consumers want. But the packers don’t want that; they want to go for the cheapest amount of money so only they can profit. Not us producers in the United States, not the other producers around the world. They only care about themselves; they do not care about consumers. They just feel it’s all about them. They want to set everyone up against each other; they want to eliminate the ranchers totally.

If we’re going to be able to help fix this world hunger issue, it will help to break up the packing plants. The big four packers, definitely. Get more packing plants out there. It’s important because the most sensible people are the ranchers. They care about the consumers and what they want; they care about the land. If they didn’t, they would not try harder. Because it’s what gets passed down from generation to generation. Each generation does its best to keep the land going and healthy; they keep the livestock healthy, even more than our own health. We went through a horrible deep freeze with negative 35-degree temperatures; and we put our livestock first before us. We care about what the consumers want. Thank you.