A Call to Action

Jacques Cheminade is President of Solidarité et Progrès, a political party in France, associated with the ideas of Lyndon LaRouche. He spoke on the third panel, “Southwest Asia: Pivot for War, or Peaceful Development with the New Silk Road,” of the Schiller Institute’s March 20-21 international conference, “The World at a Crossroad—Two Months into the New Administration.” 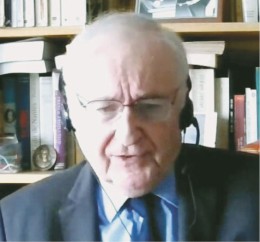 We have reached one of those moments of history in which the human capacity to survive is at stake. After having heard our speakers of the preceding three panels, nobody can deny this. It is a moment of tragedy, because the main world leaders, at least in our Western world, have lost their commitment to care for others, for the advantage of others, as defined by the 1648 Treaty of Westphalia, key to establishing peace among nations. We ourselves would become tragic heroes if we were to concede to the self-destructive dynamics of our societies, caring more for our own destiny than for the common good of Humanity.

What I mean by a “call to action” is not to tell people what to do, which would certainly be preposterous, but to give through my contribution on what has to be done, a sense of the common commitment by all of us here, not yet as a force in numbers, but as the main potential for the world to come, because we are committed to the common good, the “General Welfare of ourselves and our posterity.” As members or friends of the Schiller Institute, from multiple geographical and intellectual origins, we act for the “coincidence of the opposites,” for a constantly renewed higher purpose, in a moral, political, economic and aesthetic sense, to reach a unity from what has inspired our contributions.

We refuse to become Hamlets, selfishly obsessed by a culture of death. We have fewer excuses today to remain at an academic and existentialist level than our predecessors before World War II. Let us listen to what Dr. Leo Alexander, expert adviser to the Nuremberg Tribunal, had to say about their political sins of action and omission at that time:

Whatever the proportions these Nazi crimes assumed, it became evident to all who investigated them that they had started from small beginnings…. But it is important to realize that the infinitely small hedged-in lever from which this entire trend of mind received its impetus was the attitude toward the non-rehabilitatable sick.

Let’s be frank, we have fewer excuses. Already Lyndon LaRouche, during the nineteen eighties of the past century, warned us that potentially, today’s criminal acts were many times worse in impact than those of Adolf Hitler. Some took that as a provocation or a metaphor, but what is happening in the world since then fully confirms that potential. We are not facing “small beginnings” only. While people are dying from hunger, while countries like Yemen and Syria are tortured, while most of the world is left without a decent public health sector to fight against pandemics, our leaders turn their heads away or, worse, participate in the crimes. This has been stated better than I could do by our preceding speakers.

The humiliation of the other has become a common, bestial behavior. The financial “Great Leap Backward,” in the clutches of a green financial dictatorship, has become the policy of the West, ineluctably leading, if enforced, due to the lack of physical economic development, to a policy which polite people call population reduction, and the less polite, mass murders. More money has been issued in a few months in the United States than in two centuries of American history. And Japan, Western Europe and Latin-America are going in the same direction, giving money to the money managers and not to productive investment. As a result, the present and the expected potential economic production in the future, are not able to even maintain the present level of world population. It is not a technical mistake but the willfully destructive policy of an oligarchy to maintain its power against the interests of the other.

Such an evil behavior leads to war. Joe Biden, the President of the United States, dared to call the President of Russia a “killer.” While Putin takes it with his ironical smile, the Russian Ambassador in Washington has been recalled to Russia, and Dmitry Medvedev, Deputy Chairman of the Russian Security Council, declared: “I can only quote Freud: ‘Nothing in life is more expensive than illness and stupidity’.” At the same time, the United States announced its commitment to deploy “mini-nukes,” lowering the nuclear war threshold—NATO deploys its Defender 2021 military exercises next to the Russian borders, while Jens Stoltenberg, NATO’s Secretary General, calls for a “Global NATO” extended into Asia, and the British government pursues the aggressive dream of a “Global Britain.” Western policies are even worse towards China, as we all know. Secretary of State Antony Blinken, Secretary of Defense Lloyd Austin, and the entire Biden Administration, are openly implementing joint preparations for military confrontations with China.

From the “Project for a New American Century” of the Cheney era, to the National Defense Strategy document of 2018, to the present Interim National Security Strategic Guidance and the letter signed by President Biden on the Legal and Policy Framework for the United States’ use of Military Force and Related National Security Operations, the same war mongering tone prevails, over some hypocritical references to “democracy” and “responsibility to protect.”

We, of course, say “No!” to all these threats. The dissolution of NATO, to put all these imperial threats to an end, has become mandatory. A circle of reflection of French inter-arms, composed of major retired generals, has issued a call to “stop the mad train of NATO” before it’s too late. But, of course, much more is needed.

• the immediate establishment of a modern health care system in every country of the world;

• the doubling of world agricultural production in order to eliminate hunger and poverty for a growing world population;

• the end of the casino economy through a global Glass-Steagall law to separate the banks;

• a New Bretton Woods credit system to provide productive credit for investments in the real economy;

• the creation of 1.5 billion new productive jobs to rebuild the world economy after the pandemic and to seriously begin to overcome global devolution; and

• cooperating with Russia and China to develop the New Silk Road in South West Asia and Africa, thereby addressing the root causes of the refugee crisis while establishing a lasting peace order.

I made similar proposals for my country, France. Too often I hear people saying: “The conditions are not met…. It’s too good to be true….” And even “I think that human beings are not as good as you think.” This is the moral decay of populations in our Western World. Faced with the permanent lying of their leaders, they have too often lost their belief in the Good.

It is to tackle this cultural pessimism that I make this call for action.

Our fourth panel will show the commitment of doctors, farmers and persons engaged on the first front for human life, to present their proofs that the Good could and should be actualized, that a better world is possible, based on a moral commitment and all the potential means of production and transportation to build platforms of human development. [See last week’s EIR for the Panel 4 presentations.] The three ongoing Mars ventures express this cultural optimism, necessary to all of us to build a world of explorers beyond the borders of the known universe, both physically, mentally and, in a real sense, spiritually.

I strongly advise those of you who have not yet read it, to read Lyndon LaRouche’s book, written in 2005, Earth’s Next Fifty Years, and those who have already read it, to re-read it, with the intention to better explore the potential of your commitment, to become more confident about your own powers.

The battle for the future is not a lesson to be learned and followed, but a call for creation within our minds, and for action on behalf of justice. Let me remind you of Plato’s first book of The Republic, where he leads Glaucon, Polemarchus and Thrasymachus to explore what Justice is. He shows them that justice is neither to submit to public opinion and expect to trade advantages, nor to serve one’s friends and harm one’s enemies, nor to seek the advantage of the strongest. Socrates stresses that, “the love of honor and money is considered as a shameful thing, and rightly so,” and adds that “power is a necessary task, not to find one’s own advantage, but the advantage of the governed, and mostly of the weakest among them.”

This is what we have to mobilize ourselves for. The difficulty starts when we look at the state of affairs today: Western powers dividing the world into two categories, friends and enemies, with no sense of the common good, infecting public opinions with that sense, and dividing to conquer, as a principle to control the populations. This leads, “logically,” to the world of the Thrasymachus and the Alcibiades, i.e., rule by force and war of all against all.

Our call to action is therefore a call to change the very way of thinking of our fellow citizens, and to act to make it not only possible, but the most enjoyable thing to do, because to do the Good is fun. To organize each other we have therefore to be ruthless, because we do expect the best from each of us. It is with such a commitment that Gandhi won the independence of India, and Martin Luther King the end of segregation. The taste of victory is therefore not only possible, but necessary. As an objective imposed upon ourselves, going much further than Gandhi and Martin went (and we can find other cases), not to imitate them in this or that, but to fulfill their dreams. Let’s have many dreams come true, and sound the drum of history, but this time, as what was said in the first panel, with the best of all possible music to reach a harmony of interests along a World Land-Bridge.