After Ten Years of War:Let’s Adopt Development for Peace

Ziad Ayoub Arbache is an Assistant Professor at the Faculty of Economics at Damascus University. Dr. Arbache delivered this presentation to the Schiller Institute’s international conference, “The World at a Crossroad: Two Months into the New Administration,” during the third panel on March 21, “Southwest Asia: Pivot for War, or Peaceful Development with the New Silk Road.” 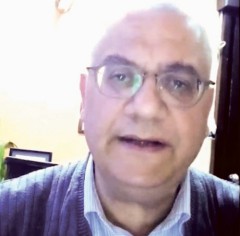 My thanks to the Schiller Institute team, especially Madame Odile Mojon, for giving me the opportunity to participate in this conference.

My intervention concerns the development of the context before and during the war on Syria, in order to conclude with a message of hope.

Concerning the context before and during the war on Syria in 2011, in the period between 2000 and the onset of the war on Syria in 2011, the Syrian Government wanted to shift economic policy towards infitah (opening). This policy aimed to revive economic and social development (in terms of restructuration); expand and reinforce Syria’s international and regional alliances, including the Five Seas Approach as a vision to take advantage of Syria’s geographic position and place the country (as trade hub) at the center of the regional energy and transport network around the Mediterranean Sea, the Black Sea, the Caspian Sea, the Arabian Sea, and the Red Sea; speed up its partnership negotiations with the European Union; and start to implement the Greater Arab GAFTA agreement.

In fact, the Syrian government set out its Five-Year Plan (2006-2010). Under this plan, strategic projects have been put in place to build the roads, ports, pipelines, etc.

Despite the instability in the region, Israel’s sabotage of the peace process in general, the flow of over 3 million Iraqi refugees to Syria, the new wave of U.S. sanctions against Syria; and the international financial crisis of 2008—the Syrian economy had been able to record growing economic performance.

The average GDP growth rate was 5% per year in the period 2000-2010. [Syria had a] strong trade balance with agricultural exports, including production of four million tons of wheat and 84 million cultivated olive trees. Syria’s energy security was guaranteed and it had continuous improvement in the Human Development Index, according to UN reports.

However, with the trio of embargo, war, and successive sanctions, everything has not only vaporized but also, we have watched a systematic destruction of the country:

As a human reservoir, we have witnessed regional and international players and actors who put oil on the fire and then cry over the fate of these people.

Spending hundreds of millions and billions of dollars on black flags and making Syria a storehouse of global terrorism with one-way ticket travel for jihadists from Europe, and the rest of the world, to Syria. [They have] accelerated the country’s economic decline; causing emigration of valuable human resources, creating millions of refugees in neighboring countries and Europe; aggravating instability in the Middle East, and the spread of extremism.

Presently, more than 85% of the sources of Syria’s GDP are under the control of American or Turkish occupation or illegal de-facto forces. This has paralyzed the Syrian economy and destroyed Syrian infrastructure and held up the national resources.

It is self-evident to say that economic dynamics are a major component of the war against Syria, targeting its sovereignty. The aim of the American occupiers and the proxy states, is to prolong the war by financing illegal army groups, depriving the Syrian state of its resources, and to prevent Syria from starting a real reconstruction process. Obviously, from the geostrategic point of view, the objective is to control the Syrian space as a “capital space” in the eastern Mediterranean and in the region.

What is the outcome of the war on Syria until now? Instead of seeking mutual benefit (a win-win situation), some of the regional countries tend to align with the U.S./Western strategy, which does nothing but further prolong regional problems rather than solve them or generate real progress and solutions. This becomes all too clear when one looks beyond the crisis of the day.

It is very difficult to predict the course of the current situation. One thing is sure: It is now time to put forward a real alternative based on common interests between the regional and international actors, which would respect regional diversity, move away from extremism, and avoid wasting another decade of development.

From a geo-economic perspective, this region with more than 600 million consumers (this means the Arab and EU countries, including Turkey) is more than sufficient to explain the legitimacy of this proposition. This is not only from the standpoint of morality but also from the economic point of view of all countries in the region with mutual benefit.

I would like to end with a positive thought.

Shared development is the only way to bring this peace into the Middle East. And a permanent solution can only be reached through the concept of “Peace Through Development,” as the Schiller Institute stresses. This idea has already been put on the international agenda, especially with recent events in Europe, that is the problems with tourism of Europe.

It is evident that the challenges on the ground are enormous in terms of the investments required: the rebuilding of hard infrastructure—roads, bridges, housing, electricity, water, etc.—and soft infrastructure—education, stabilizing the currency. Public services, in particular education and health are very crucial. But on other side, the potential domestic demand is high, and the reconstruction process presents an extraordinary perspective of opportunities.

Consequently, Peace through Development seems to be the best way to avoid another wasted decade for Syria, and for the majority of Middle Eastern countries in general.

Thank you again for the opportunity, and for your attention.