Mr. Shakeel Ramay of the Sustainable Development Policy Institute in Pakistan spoke on the third panel, “Southwest Asia: Pivot for War, or Peaceful Development with the New Silk Road,” of the Schiller Institute’s March 20-21 international conference, “The World at a Crossroad: Two Months into the New Administration.” Most of Mr. Ramay’s slides are omitted here; his presentation in full can be seen here. 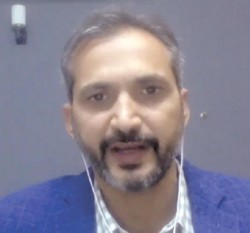 Hello everybody, good morning, good evening and good afternoon, because we are sitting in different time zones. I’m Shakeel Ramay. I’m a political economist, and I work on China. And I am working in Pakistan with a known think-tank, the Sustainable Development Policy Institute. If you have any questions on the presentation, you can ask me anything.

My topic for today is, “CPEC, Connectivity and Future Prospects.” Definitely I will talk about CPEC [the China-Pakistan Economic Corridor]. CPEC is not just about Pakistan. CPEC has been designed to improve the connectivity within the region and beyond the region. I will start by giving you just a few facts and figures about the CPEC, then I will move toward the connectivity and the future prospects.

First of all, what is the CPEC? If we look at the long-term plan of the CPEC, which has been agreed upon between Pakistan and China in 2017, it talks about the seven areas. You can look at connectivity, energy, industries and industrial parks, agriculture development, tourism, people’s livelihood, and financial cooperation.

During the first phase of the CPEC, lots of people talk about “What will Pakistan gain from that?” First of all, Pakistan got 75,000 jobs. When we talk about 75,000 jobs, it means 75,000 families. That means a huge number of people have benefitted. Also, under CPEC, it has been committed ‘til 2022 that 10,000 MW and above that, of electricity will be produced for Pakistan. It is entirely needed, because if we look at 2015, in the region of Pakistan, it was clearly written, due to the electricity shortage, Pakistan was losing $4-$5 billion per annum. If we look at the GDP of Pakistan, it is only $200-plus billion. It was a huge loss. Our industry was shifting toward other countries, because the load-sharing of Pakistan was not able to provide a sustainable electricity to industry. Then 100-plus SMEs [small and medium-size enterprises] also benefitted and infrastructure improved.

There is one important sector I want to highlight. In 2012, there was a report by the National Highways Authority of Pakistan to the Parliament of Pakistan. It was highlighted that Pakistan needed $1.2 billion in U.S. dollars to rehabilitate transportation infrastructure. Just to rehabilitate. It did not mention about the financing it required for laying new infrastructure. That infrastructure was deteriorated, because Pakistan was part of War on Terror and Pakistan gave access to NATO, and the U.S. and other allies, to use Pakistan for transportation purpose, to bring logistics and all goods needed, or ammunition or anything needed in Afghanistan. That was a prize some would think. But unfortunately, our allies were not ready to invest into Pakistan. 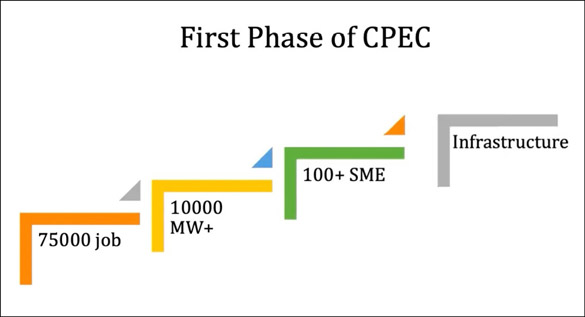 As we look at the future gains for Pakistan, a report has been done by the World Bank. According to their report, Pakistan would also be an immediate beneficiary of BRI [the Belt and Road Initiative] through CPEC. For example, there would be an increase in real income by 8%. If Pakistan introduced the reforms, it will be 10.8%. And if we look at the welfare gains, that is very substantial: Because due to the War on Terror, because Pakistan allied with the U.S. and other European countries and NATO, Pakistan also faced the problems due to the War on Terror, and the welfare gain is down sharply. So due to the BRI and CPEC, there will be further gain. And, CPEC will produce 1 million jobs till 2030, in Pakistan included. So with other parameters of the BRI, it is expected that the jobs will be 4 million for the Pakistanis.

Then again, we talk about trade and export: It will give a boost of 9.8%. When we talk about a factor of return, it is 10.81%, and the immediate beneficiary in this will be the unskilled labor in Pakistan. Be that construction workers or other infrastructure work, it will benefit the unskilled people.

Then we talk about poverty: Due to the CPEC and the BRI, Pakistan will be able to bring about 1.1 million people out of extreme poverty.

But what would be the real benefit? As I have titled my talk, the real benefit will come when the CPEC will act as a hub of connectivity. Because through that, China also wants to connect through CPEC to other countries. I will show you two maps very quickly.

First, right now, [how] China is doing trade with the world. If we look at that, formerly China moves [its exports] from the Shanghai deep sea port, it crosses all throughout Southeast Asia, then going to the South Asian countries, then going through the Arabian Sea, and then to other countries and reaches different parts of the world. This trade has been conducted for six countries only, including Saudi Arabia, Kuwait, Germany, France, and one or two other countries.

So, that is not good if they want to export from Kashgar [in southern Xinjiang], or they want to export from some other part of the country. But, if they use the CPEC route, it reduces the travel time on one side; and, second thing, it also helps China to avoid the Strait of Malacca, because, you can say there have been some problems in the recent past, and it is expected there may again be some problems in the coming future. 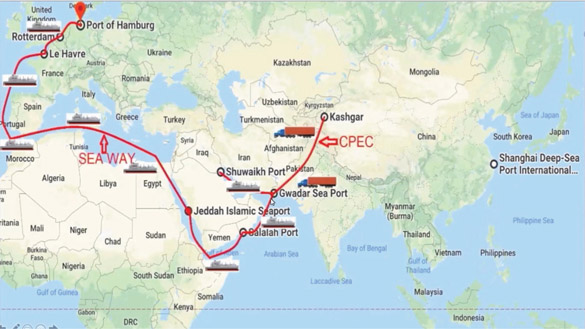 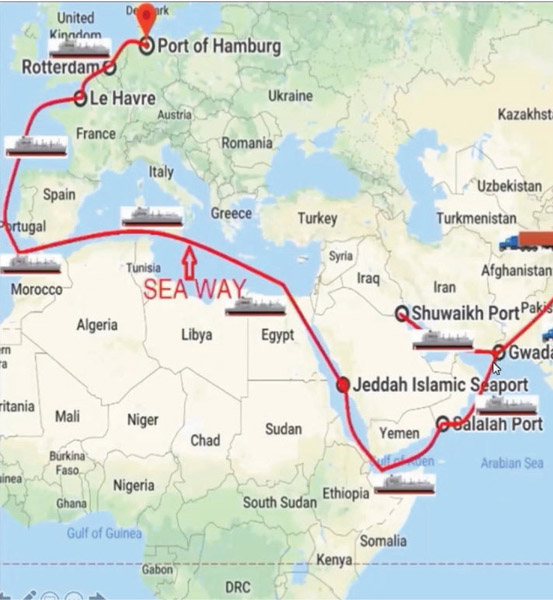 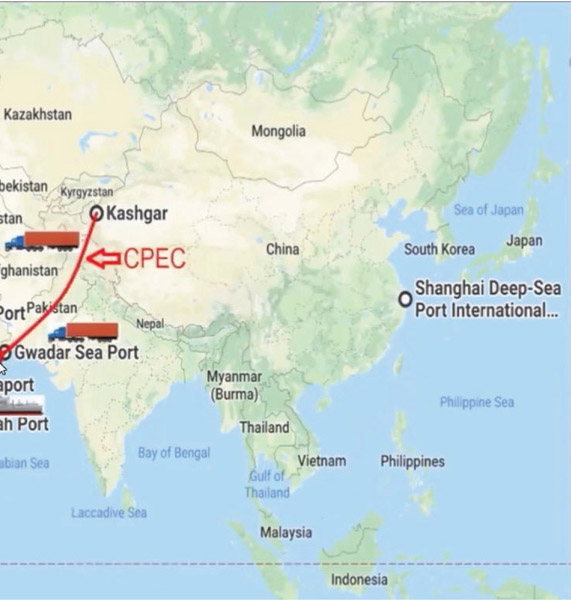 Why do we need CPEC-plus with part of Afghanistan? If we look at poverty, if we look at unemployment, if we look at food insecurity, and acute food insecurity, and if we look at jobs, it keeps us in jobs and food secure. On the food security, if you remember a few days back, the General Secretary of the UN, he categorically mentioned, due the COVID and the other crises and conflicts in Afghanistan, Afghanistan is at the brink of food crisis. And then, again, I have proposed one indicated [solution] according to the need of Afghanistan. It’s called Afghanistan’s Regional Economic Integration Fund. Why is there the Economic Integration Fund? Because if they look at Afghanistan, there are different initiatives working there, for example, Heart of Asia [the Heart of Asia – Istanbul Process]; the investment by the European Union, investment by U.S.A., India, and by Iran, and some other countries also.

Shouldn’t we present CPEC as a competitor to them? No. We should present it as complementary, and all of the projects, and all the initiatives should also present themselves as complementary. So the best choice for us is to develop a new fund for Afghanistan by keeping in mind the requirements of Afghanistan. Thus, I proposed this Afghanistan Regional Economic Integration Fund. That fund should be, as you might say, of the people—there should be no politics. There should be no games or something like that: It should be purely for economic development.

When we talk about extra-regional, this is where the [inaudible] I talk about. There, simultaneously, other than India, there are other corridors affected. For example, first of all, the Middle Corridor of Turkey. Turkey is also trying to build its own corridor, so easier to reach China. And again, Afghanistan will be part of that. And Afghanistan being a [member of the] Heart of Asia, and Turkey being an active member of Heart of Asia, they can also connect it to there.

And then Khaf-Herat: Iran-Afghanistan. That is a new initiative which happened in the last year, in December. So that is a railway line to connect with Iran. It can be connected to the International North-South Transport Corridor. If it is connected to the International North-South Transport Corridor, that will be again a major corridor in the region, for all these, you could say, ECO [Economic Cooperation Organization] countries. If it is extended, naturally it will have a link with CPEC, and CPEC can provide the Belt and Road. You can say that will be happening in the future, because through the ECO they can expand it there, and nobody can talk about why it is happening there.

And the last corridor, BCMI: Bangladesh, China, Myanmar and India corridor, which is the sixth corridor of the BRI, which China has offered to Bangladesh, Myanmar, and India. If that can happen, that will be really an interesting event, because, then on one side, China has BCMI; on the other side China has the CPEC. If China wants to connect BCMI with the CPEC, to reach to Central Asia, it will give automatic choice to India to reach Central Asia through a land route, which India has been demanding for a long time. They’re demanding it, and they’re dreaming it, I can say, to reach Central Asia through a land route: BCMI would provide them an excellent opportunity. If they want to join the bandwagon, it will provide them that opportunity that they are looking for, and what they are trying to do with the Khaf-Herat and International North-South Transport Corridor. They can achieve that through BRI and CPEC.

The Great Need of Cooperation

But how can we move forward? How to achieve it? I say there should be no competition among all these corridors. They should work to cooperate, cooperate, and cooperate. Cooperation will be the only way to make any of these corridors successful. If they’re trying to undermine any other corridor, it will undermine all the corridors. And if they want to build on it and benefit, they need to cooperate. That’s one thing. The second thing: They cannot compete with the BRI or the CPEC. Because it’s a part of the big project of China. Under the BRI, 140 countries already have signed a memorandum with China. So that means the CPEC would be linked with the other things. But still I say, the need of our time is for cooperation. All of the countries need to cooperate, they have to build the links with all these corridors.

And there’s a strong hope. Like China is also trying to invest in Iran. Iran is offering these alternatives to the Khaf and Herat to India. But Iran is also part of the BRI. So ultimately, it will also come, again under this, to the BRI, and the CPEC will connect them.

Last point: Avoid the pressure of history. Because a very interesting thing is happening in this region. For example, China has a civilization. Turkey has its own civilization, the Ottoman Empire and all these civilizations. Iran has its own civilization. So that civilization is a good point, they have the history of development, of the evolution of the country. But it should not be like a pressure on the minds, so that maybe due to that evolution, any country is superior to another country: They are all equal. They need to work together. They will need to avoid the pressure of history, or what you consider the baggage of history. They need to focus on the future.

In this whole scenario, Pakistan is a country which does not have any such baggage of history, because we were just created in 1947, so we have a very short history, and we are not part of any of these civilizations. So Pakistan can be a good harbinger of these old civilizations, where they can meet, they can work together, and CPEC offers an excellent opportunity.

Thank you, Ladies and Gentlemen.