How Iraq Can Be a Peace Bridge,Not a Wrestling Ring for Powers

Mr. Al-Atabi is a Member of the Council of Representatives, Iraq’s parliament. This is his statement to the third panel, “Southwest Asia: Pivot for War, or Peaceful Development with the New Silk Road,” of the Schiller Institute’s March 20-21 international conference, “The World at a Crossroad: Two Months into the New Administration.” His speech was translated by Hussein Askary. 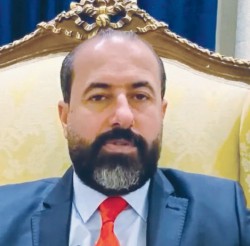 I extend to you all our love and appreciation crowned with the most fragrant greetings of peace. Our most sublime prayers are for your success in this conference, and thank you for inviting me to speak to you.

Greetings to the international Schiller Institute and its chairwoman, Mrs. Helga Zepp-LaRouche, for convening this important conference in this very sensitive time. And greetings to all esteemed guests.

We would like to also thank the member of the Schiller Institute and administrator of the Arabic LaRouche School of Physical Economics, my brother and dear friend Mr. Hussein Askary, for his interventions in the ongoing debate in Iraq regarding the reconstruction of the country and its economic development. We have indeed benefitted much from his interventions and proposals.

Today, we would like to discuss a number of important matters and problems from which the structure of the Iraqi state suffers. And among these issues is the condition of the infrastructure in Iraq, and the rentier nature of the Iraqi economy [an economy dependent on a single source of wealth, here oil—trans.]. We will also point at the importance of activating the Iraqi-Chinese Framework of Cooperation, generally known in the media as the “Oil for Reconstruction Agreement.”

There is a whole package of problems that haunt the Iraqi economy, and the China Agreement has many advantages in dealing with them, advantages for the Iraqi people and their economy. We believe these advantages are many. The China-Iraq Agreement can be considered the key to ridding Iraq of many of its suffocating social and economic crises.

I would like to deal with some of these today, which are six, I but will discuss two of them in depth due to time restrictions.

Among the problems Iraq is suffering from are the catastrophic deficit in infrastructure; the huge rate of unemployment, especially among the youth; the chronic budget deficit; and the nature of the oil-dependent Iraqi economy. The Agreement can also help us get rid of the corruption in the country. It also facilitates connecting Iraq to the New Silk Road project.

One of the urgent matters is the catastrophic deficit in infrastructure, whether the [hard infrastructure] like ports, airports, roads, railways, power generation, water and housing, or the soft infrastructure such as healthcare, education and scientific research.

Iraq and China can cooperate to build many projects in more than one sector of infrastructure we mentioned, all at once. For example, building the Faw Great Port and roads and railways to and from it; building power plants, housing clusters, factories, water projects and sewage systems in more than one spot on the Iraqi map.

The other very important matter today, is the massive unemployment rate, especially among the young segments which constitute a major part of the population in Iraq. We believe that unemployment makes those youth a ticking social bomb and a reservoir of recruitment for extremist and perverted groups. A clever and serious Iraqi negotiator should make it a condition of cooperation with China, to employ a major ratio of Iraqi workers and engineers in the projects undertaken by the Chinese companies inside Iraq. We all know that the Chinese worker and engineer today have a relatively high wage and enjoy stability and prosperity in their country, and are not eager to work for a lesser wage and in a potentially challenging condition abroad. Therefore, Chinese companies tend to train the labor force in the host country. Thus, Iraq would be able to find employment for tens of thousands of youths in these projects.

Therefore, we believe that the Iraqi-Chinese Agreement is a key to find a solution to many big problems, because the agreement will build for Iraq and its people the economic platform upon which the Iraqi economy will stand to move the wheels of the industrial as well as agricultural production, and even vitalize the tourism sector. To get rid of this reliance on the rentier, single source of wealth, as we argued earlier, Iraq needs a new economic structure.

This is the problem the Iraqi people are suffering from. Therefore, this agreement, we believe, is very important for escaping the debacle in which the sons of our people find themselves in our beloved country.

Finally, I hope that Iraq will become a bridge for peace and cooperation among the regional and international powers, not a wrestling ring where they fight. We call on the United States of America and the other powers to respect the sovereignty and independence of Iraq, and endeavor to cooperate with China or other powers; to respect the global order and United Nations Charter on the basis of equality among all nations, be they large or small; and to respect their sovereignty and independence of policymaking, but at the same time work jointly for peace, economic development, and mutual benefits.

I thank for your attention, and I wish your conference all success. By the will of God, we will see this Framework Cooperation Agreement implemented on the ground, so that our people may enjoy the various fruits of it. Thank you!