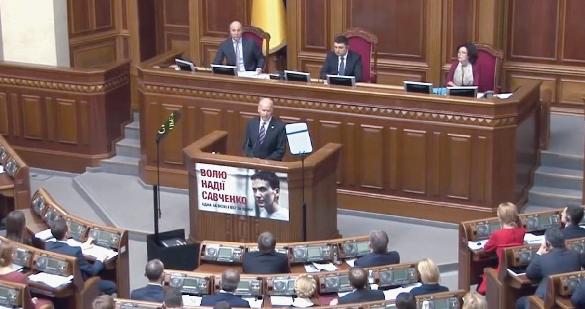 White House
In the 2014 coup and 2015 formation of a strongly right-wing and neo-Nazi-influenced government in Ukraine, then Vice President Joe Biden (seen here) repeatedly went to the Supreme Rada, Ukraine’s parliament, to issue instructions and orders. Since then, with his Atlantic Council collaborators, he has pushed Ukrainian governments toward confrontation with Russia.

April 11—The Atlantic Council, a think-tank dominated by war hawks from the U.S. and NATO countries, with strong ties to the Biden Administration, has been fanning the flames for a NATO-Russian conflict over Ukraine. On February 16, it published a report, “Why is Ukraine still not in NATO?” that included the interview given by Ukraine’s Prime Minister Volodymyr Zelensky to Axios on January 23, 2021, just days after Biden’s inauguration. Asked what he would say to Biden when they first speak, Zelensky said he would ask the question: “Mr. President, why are we not in NATO yet?”

In the Axios interview, Zelensky said that if Ukraine were already in NATO, “there would have been no escalation in the east of Ukraine. If Ukraine is targeted by the Kremlin now, “who is next? It could be any European country; it could be the United States.” He claimed that the West is facing not just threats from the Russian military, but “information warfare, cyber attacks.” Zelensky added that “sanctions are effective” in holding back Russia, referring to the attempt to shut down the Nord Stream 2 gas pipeline by Secretary of State Pompeo during Trump’s presidency and now by Biden and Blinken, but are not enough. He concluded by challenging the interviewer on the return of Crimea: “Are you saying we should give up on Crimea?”

Among the leading advisers to Biden on Ukraine is Michael Carpenter, a nonresident senior fellow with the Atlantic Council’s Eurasia Center. Carpenter, who served as former Deputy Secretary of Defense for Russia, Ukraine, Eurasia, and the Balkans during the Obama Administration, and as special expert on Russia for the National Security Council, is also the Managing Director of the University of Pennsylvania’s Biden Center for Diplomacy and Global Engagement. In 2018, he was the escort for Ukrainian neo-Nazi and government official Andriy Parubiy during his trip to Washington. When confronted about Parubiy’s unrepentant public ties with the Nazi movement that provided muscle for the 2014 coup, Carpenter defended Parubiy as a “patriot” and “great leader.” Michael Carpenter and Joe Biden wrote an article published in the Council on Foreign Relations’ journal Foreign Affairs in its January/February 2018 issue, “How to Stand Up to the Kremlin: Defending Democracy Against Its Enemies.”

In the article, the two begin with the usual slanders against Russia and President Putin, that Russia “is brazenly assaulting the foundations of western democracy,” using a “variety of overt and covert means.” The Kremlin “harbors an erroneous but stubborn—perhaps even obsessive—belief that Washington is actively pursuing regime change in Russia,” which includes a “conspiracy theory” that the United States was involved in engineering uprisings in areas surrounding Russia, including Ukraine in 2004 and 2014.

Among the proposals the co-authors make is that the U.S. can best counter the Kremlin’s “malign influence” by “improving deterrence of Russian military aggression”; promoting energy security (for example, their insistence today that Nord Stream 2 must be shut down); and by being prepared to “impose meaningful costs on Russia when they discover evidence of its misdeeds.” Crucial to accomplishing this is to continue “to forward-deploy troops and military capabilities to eastern Europe,” including consideration of the desires of Georgia and Ukraine to join NATO and the EU.

Do they really believe, given Biden’s role as the “point-man” in the coordination of the 2014 Maidan coup, that Moscow’s concern with western actions involving Ukraine, is the product of an “obsessive belief” in a “conspiracy theory”? 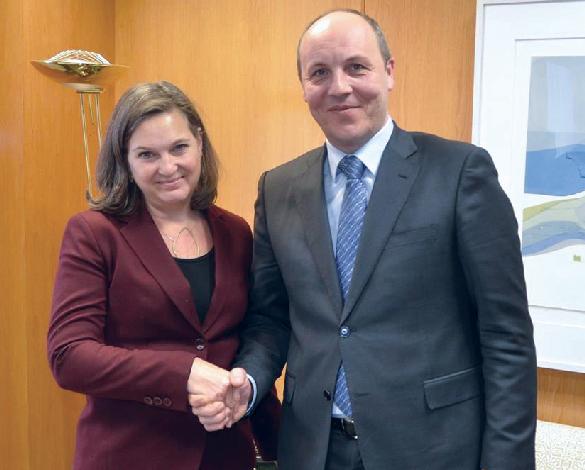 President Biden’s history as a war hawk is evident when it comes to his approach to Russia and Ukraine. There is a continuity from his role in overseeing the 2014 Maidan coup to his current statements. On April 30, 2014, just two months after the regime change coup in Kiev, Biden—with Carpenter at his side—told an audience at the Council on Foreign Relations that Russia’s concern about U.S. policy regarding Ukraine has “nothing to do with the enlargement of NATO. It was born in the Kremlin. It was born in Putin’s mind.”

Describing himself as a “proud Atlanticist,” Biden said that NATO and the trans-Atlantic relationship “have never been more relevant than they are today,” reaffirming the “solemn commitments” under Article 5 of the NATO treaty, “in response to Russian aggression.” In a pre-taste of what appears to be his administration’s policy today, he said then that, “when it comes to energy, Russia should not be able to use its resource as a political weapon against its neighbors.” And in case of Russian violations of Ukraine’s sovereignty, “we have to be resolute in imposing costs.”

On Ukraine, one unmistakable sign that Biden has not reconsidered the danger implicit in his support for the Maidan coup, is his having appointed Victoria Nuland to the number-three position at the State Department, as Undersecretary for Political Affairs. Nuland is a hard-core neoconservative who served as the on-the-ground coordinator of the that coup under Biden. Part of the coalition she oversaw included the adherents of Ukraine’s Nazi movement, the followers of Stepan Bandera and the Azov Battalion, who are today embedded in the state military and security apparatus, taking the point in the confrontation against the breakaway Donbas republics. When it appeared that, shortly after his election, Zelensky was open to a diplomatic settlement with Putin, he and his supporters received death threats from these networks.

It is these networks that Putin’s spokesman Dmitry Peskov is referring to when he questions whether Zelensky is in control of his own government’s military forces.

Also part of the network coordinating Nuland’s activity in Ukraine was the notorious former MI6 operative Christopher Steele, who later was hired by the Hillary Clinton campaign to fabricate the dossier charging that Putin meddled in the 2016 election to elect Donald Trump, whom Putin was allegedly blackmailing. Steele submitted dozens of reports on the situation in Ukraine in 2014 to then-Secretary of State John Kerry and to Nuland, who later vouched for Steele when the FBI questioned the legitimacy of his charges against Trump and Putin. The Steele dossier and subsequent investigation of “Russiagate” successfully undermined Trump’s stated intent to establish a friendly and collaborative relation between America and Russia. Trump was subsequently impeached by the House of Representatives over bogus charges that he attempted to blackmail Zelensky to obtain “dirt” on Biden. The U.S. Senate acquitted President Trump of the charges made against him at the impeachment trial.