An Explosive Mix Amidst a Ukrainian-Russian Confrontation 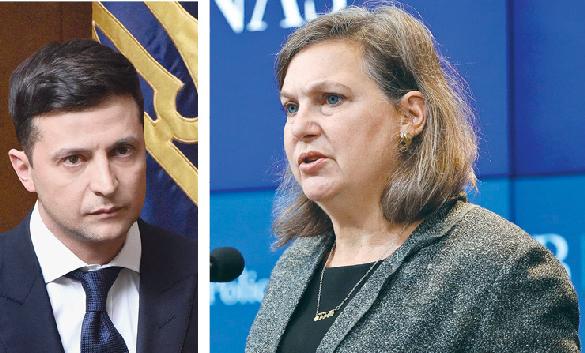 Left: cc/Vadim Chuprina; right: cc/Brookings Institution
Victoria Nuland (right), Assistant Secretary of State under President Obama, played a major role in overthrowing the government of Ukraine in 2014 to install an anti-Russian one. Now she is the nominee of the Biden Administration for Under Secretary of State. Ukraine’s current President, Volodymyr Zelensky (left): “NATO is the only way to end the war in Donbas.”

April 8–The Biden Administration is playing with fire by stoking tensions between Ukraine and nuclear-armed Russia. The team that Biden has brought on board to deal with Russia and Ukraine is virtually the same team that was behind the coup in Kiev in 2014, about which then-Assistant Secretary of State for European Affairs, Victoria Nuland, chosen by Biden to be Under Secretary of State for Political Affairs, famously bragged that the United States had spent $5 billion to replace a pro-Russian administration with one that was more amenable to British-hatched nuclear chicken-game geopolitical schemes. That coup had the effect of elevating neo-Nazi groups in the tradition of Hitler collaborator Stepan Bandera into positions of dominance both in and out of the government. That reality has changed little since then, even with the 2019 change of administration from Petro Poroshenko to Volodymyr Zelensky.

During her April 7 webcast, Schiller Institute founder Helga Zepp-LaRouche stressed that the context for the drive to contain both Russia and China is the onrushing collapse of the global financial system and the rise of the alternative economic possibilities with China’s Belt and Road Initiative. She called the war danger “amazing” and noted that the escalation of tensions in the Donbas region comes as NATO forces are on the move all across Eastern Europe, including Ukraine, under the guise of the U.S. led military exercise, DEFENDER-Europe 21. Zepp-LaRouche told her audience:

So, while Ukraine is not yet formally a NATO member, they practically push it in this direction, and President Zelensky just made an urgent call to join NATO more quickly, which brings it really to a threshold, because, if you remember the situation in 2014, when the Maidan coup happened, it was clear that Ukraine joining NATO is a red line for Russia, for obvious reasons. If NATO has access to the Black Sea, that makes Russia very difficult to defend. And naturally, the border is not very far from Moscow. This is extremely dangerous.

The DEFENDER-Europe 21 maneuver is now in preparation—last year’s Defender 20 was planned to be the largest maneuver since the end of the Second World War; this year’s exercise is supposed to be—in the middle of a lockdown! Here you have a pandemic and many countries in Europe are locked down, and clearly the infection rate is not under control, but they think they have to have a maneuver, very rapidly transporting large numbers of troops. This is creating all kinds of problems.

There was just an interview in the German Lausitzer Rundschau newspaper, in which one of the generals said the bridges and the roads and railways are not prepared, many of these bridges cannot take a 50- or 60-ton tank, or a whole train of such tanks. So, they are now repairing these bridges and the railway lines with EU money! This is really an incredible situation, and I think we need to alarm the population. Most people are sleepwalking into something whose consequences can only end up in a catastrophe. 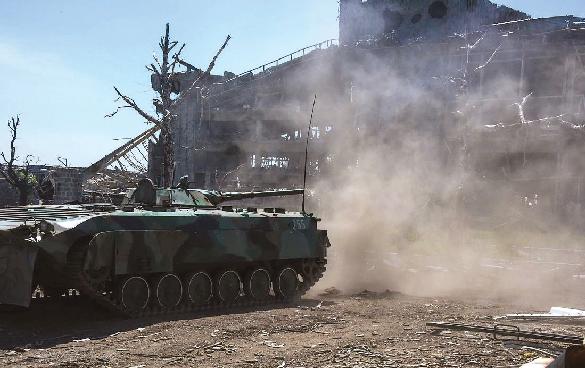 cc/Mstyslav Chernov
The level of violence along the line of contact between the Ukrainian army and the militias of the two break-away republics, the Donetsk, and Luhansk People’s Republics, has been escalating.

The current escalation could be said to have been triggered by a February 26 White House statement attributed to Biden on the occasion of the seventh anniversary of the return of Crimea to Russia. The statement provocatively declared:

On this somber anniversary, we reaffirm a simple truth: Crimea is Ukraine.

The United States does not and will never recognize Russia’s purported annexation of the peninsula, and we will stand with Ukraine against Russia’s aggressive acts. We will continue to work to hold Russia accountable for its abuses and aggression in Ukraine.… The United States still believes in the promise of Ukraine and we support all those working towards a peaceful, democratic, and prosperous future for their country.

On April 2, President Biden spoke with Ukrainian President Zelensky by phone and “affirmed the United States’ unwavering support for Ukraine’s sovereignty and territorial integrity in the face of Russia’s ongoing aggression in the Donbas and Crimea.”

The DEFENDER-Europe 21 exercise was kicked off on March 15 and it will be the largest exercise of its kind in Europe since the days of the annual Reforger exercises during the Cold War. Its 2020 predecessor was scaled back considerably because of the COVID 19 pandemic. This year’s iteration of the exercise will involve more than 28,000 troops from 26 nations which will conduct nearly simultaneous operations across more than 30 training areas in a dozen countries between May and June. According to the U.S. Army Europe and Africa press release, equipment and personnel were to begin moving from the United States in March, and participating units were to begin drawing Army prepositioned stock from sites in Germany, Italy, and the Netherlands. It will include four sub-exercises and two other training events, one of which–called African Lion–which will take 5,000 troops from 24 nations to Morocco for training on medical readiness, large-scale live-fire exercises and air, maritime and forward command post training exercises. 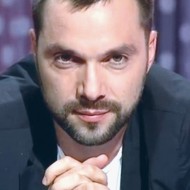 cc/Voices of Ukraine
Alexey Arestovich, the representative of Ukraine in the Trilateral Contact Group on Donbas.

The Army release says that exercise “demonstrates our ability to serve as a strategic security partner in the western Balkans and Black Sea regions while sustaining our abilities in northern Europe, the Caucasus, Ukraine and Africa.” The explosive hot-war potential of this can be seen in the April 4th words of the representative of Ukraine in the Trilateral Contact Group on Donbas, Alexey Arestovich, who claimed that the purpose of the exercise is to plan out a military confrontation with Russia. He said:

A large-scale NATO exercise called Defender Europe 2021 has begun, which means “protect Europe.” The scenario is that from the Baltic sea to the Black Sea, we are practicing for, well, let’s put it directly, the war with Russia, the scenario of armed confrontation with Russia.

The active phase of these exercises is May-June, and now the preparation has begun—deployment of forces, logistics, transfer of equipment, which is also an element of the exercise.

U.S. and allied military deployments into Russia’s environs outside of the DEFENDER-Europe 21 events also continue. American, British, and other NATO intelligence gathering aircraft are regularly seen over the Barents Sea north of the Kola Peninsula near the complex of military bases in the Murmansk region and over the Black Sea off the coast of Crimea, as well as other areas, at the rate of 30-50 per week according to the Russian Defense Ministry.

U.S. Navy exercises in the Black Sea also continue at a high rate. CNN, citing an unnamed U.S. defense official, reported that the U.S. is considering sending warships into the Black Sea in the next few weeks in a show of support for Ukraine amid Russia’s increased military presence on Ukraine’s eastern border. The U.S. Navy routinely operates in the Black Sea, but a deployment of warships now sends a specific message to Moscow that the U.S. is closely watching, the defense official is reported to have said. One day later, TASS reported that the Turkish Foreign Ministry had notified member states, under the 1936 Montreux Convention, that two U.S. warships planned to enter the Black Sea through the Bosporus on April 14-15 and stay until May 4-5.

At the same time, the level of violence along the line of contact between the Ukrainian army and the militias of the two breakaway republics, the Donetsk, and Luhansk People’s Republics, has been escalating. On March 26, the Ukrainian government in Kiev claimed that four of its army’s soldiers had been killed and two others wounded by shelling from the Donetsk People’s Republic in Shumy, a village on the line of contact about 40 km north of Donetsk city, “seizing the attention of senior American officials in Europe and Washington,” the New York Times reported. It was reported that U.S. European Command raised its “watch level” from possible crisis to potential imminent crisis, its highest level, in response to the deployment of Russian troops, a move which Pentagon spokesman John Kirby refused to confirm or deny.

Interestingly, the daily reports of the OSCE Special Monitoring Mission in Ukraine make no mention of the kind of engagement claimed by the Ukrainian side. Its report for March 26 notes a ceasefire violation, characterized as a burst of machine gun fire, about 8.5 km west northwest of Horlivka, the town immediately to the east of Shumy, but that’s it. There appears to be no evidence, beyond the assertions of the government in Kiev that the incident even happened.

Based on these events, real or imagined, Zelensky went into a flight forward mode in demanding the early entry of Ukraine into NATO. On April 6, he called both NATO Secretary General Jens Stoltenberg and Canadian Prime Minister Justin Trudeau as part of this effort and British Prime Minister Boris Johnson the day before. “In recent weeks, we have seen a very dangerous tendency to increase the number of ceasefire violations by the Russian occupation forces and the number of Ukrainian defenders killed,” Zelensky told Stoltenberg, the Ukrainian readout of the phone call reported.

Zelensky thanked the Secretary General for the Alliance’s attention to the security situation around Ukraine and called on NATO members to pay more attention to security issues in the Black Sea and to strengthen their military presence in the Black Sea region, stating: “Such a permanent presence should be a powerful deterrent to Russia, which continues the large-scale militarization of the region and hinders merchant shipping.”

Zelensky stressed that the most urgent issue in relations with NATO for Ukraine was the possibility of obtaining the NATO Membership Action Plan (MAP), saying:

We are committed to reforming our army and defense sector, but reforms alone will not stop Russia. NATO is the only way to end the war in Donbas [emphasis added]. Ukraine’s MAP will be a real signal for Russia.

In Washington, when the various administration spokespeople at the White House, State Department and Pentagon were asked about Zelensky’s lobbying effort, they all expressed support for Ukraine’s aspirations but in effect all said, “no comment.”

Russian Foreign Ministry spokeswoman Maria Zakharova, in the most recent of several Russian statements on the situation in the Donbas and Zelensky’s drive for NATO membership, warned on April 9 that Ukraine’s accession to NATO will lead to disaster. She said:

We have taken note of a statement by Ukrainian President Zelensky, who visited Donbas yesterday and said that the country’s accession to NATO would supposedly help end the conflict in the region. However, contrary to Kiev’s expectations, potential NATO accession will not only fail to bring peace to Ukraine but will, by contrast, lead to a large-scale rise in tensions in the southeast, possibly causing irreversible consequences for Ukraine’s statehood. We once again call on the Kiev authorities to adopt a responsible approach and finally start implementing their obligations under the Minsk Package of Measures.

…the bellicose intentions of Kiev, [are] still guided by the illusion that the there can be a military solution to the conflict in the country’s southeast.… Troops and military equipment are being deployed to the region and mobilization plans are being updated. Ukrainian media outlets are whipping up hysteria based on the myth of the Russian threat, claiming that Moscow has plans to attack Ukraine in the near future. Kiev’s Western sponsors openly support most of the developments. 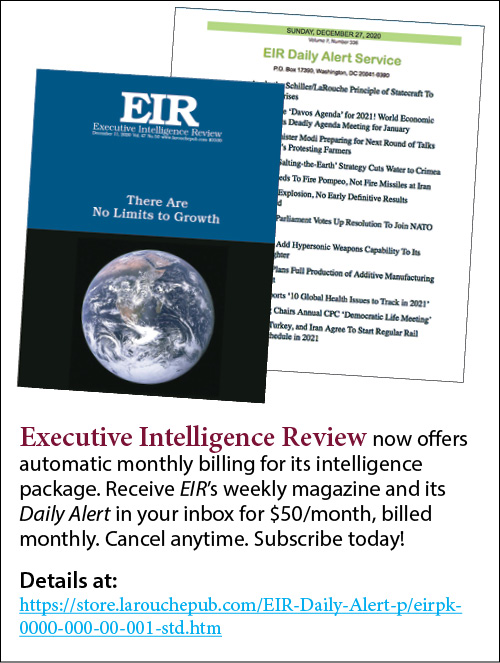