Dante’s Commedia: The Way from HellTo Science and Space Exploration 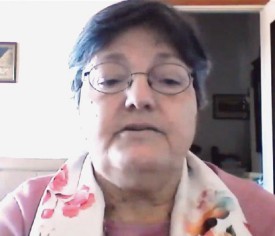 Liliana Gorini is Chairwoman of MoviSol, LaRouche’s movement in Italy. She delivered this speech to the first panel, “Reversing the Cultural Wasteland—The Urgency of a New Renaissance, Creating a Planetary Culture Worthy of the Dignity of Humanity,” of the March 20-21 Schiller Institute Conference, “World at a Crossroad—Two Months into the Biden Administration.”

This year we celebrate Dante Alighieri’s 700th death anniversary. He was born in 1265 in Florence, and died in 1321 in Ravenna.

The Italian poet created the Italian language at a time in which Italy was just a collection of city states, often at war one against the other, and in which the high class spoke Latin while the people only spoke dialects. As LaRouche often emphasized, the national language is profoundly connected to the nation-state, and Dante consciously created the Italian language in order to free Italy from the oligarchy which dominated at that time, and create a sovereign nation-state. 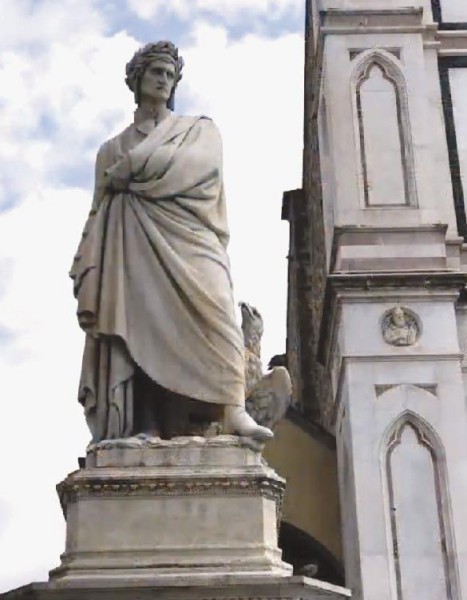 Sculpture by Enrico Pazzi, 1865
A monument to Dante Alighieri in Florence, Italy.

Before the Commedia he wrote De Vulgari Eloquentia, [On Vernacular Eloquence] which makes fun of all Italian dialects and the way they are used by the oligarchy to keep a population in ignorance and slavery. With his De Monarchia, he outlined a project to have a nation-state based on the common good, and he called on Emperor Arrigo VII, Henry the VII of Germany [Emperor of the Holy Roman Empire], to free Italy from city-states and wars. He was therefore a leader of the Ghibelline faction, as opposed to the Guelph faction loyal to Pope Boniface the VIII, a corrupt Pope who finally exiled Dante for his important political role. He never could go back to Florence, his birth town.

Dante wrote the Commedia during his exile years, between 1307 and his death in 1321, in Ravenna, where he is buried. His Commedia or Divine Comedy is not only a masterwork in poetry, but also a treatise in history, religion, statecraft, economics and science. As Giovanni Boccaccio reported in his Vita di Dante (Life of Dante), after it was published it immediately became very popular among the population, which used to read it, recite it, and discuss it in churches or in the piazza, something which still to this day was kept as a tradition by a number of classical actors, such as Vittorio Gassman or Roberto Benigni with their Lectura Dantis—recitation and explanation of Dante’s Commedia. As [with] Giuseppe Verdi and his operas, Dante became a national hero as a poet and a political leader.

Many verses from the Commedia are to this day commonly used in daily language, such as “non ti curar di lor, ma guarda e passa” the popular version of “non ragioniam di lor, ma guarda e passa” (“let us not speak of them, but look and pass [on]”). Or, “Fatti non foste a viver come bruti ma per seguir virtute e canoscenza” (What Ulysses tells his men: “You were not made to live as brutes, but to follow virtue and knowledge”).

But Dante is not only dear to the Italian nation, particularly in this last year of suffering because of the COVID pandemic. He is an example of what Helga Zepp-LaRouche often calls a “dialogue of cultures.” In his Commedia he puts in his “Limbo” the most important Arab scientist Avicenna, next to Plato and Socrates, among those philosophers who could not be in Paradise because they were not Christian, but they were just, and a reference point for the poet. He quotes Avicenna also in his Convivio [Banquet], where he gives a quite accurate description of the Milky Way.

In 1919, Spanish Arabist Don Miguel De Palacios published a study, La escatologia musulmana en la Divina Commedia, [Islamic Eschatology in the Divine Comedy], in which he compares Dante’s voyage in the afterlife to important works of the Arab Renaissance, including the work of Avicenna, in which Hell is described in a similar way, a funnel-shaped chasm built on concentric spheres (7 in Islam, 9 in Dante, plus Limbo). In quoting Avicenna, Dante passed on the beacon of the Arabic Renaissance, based on ancient Greek and Indian scholars, making the Golden Renaissance possible.

And today it is important to re-live his voyage from Hell to Paradise in order to make a new Renaissance possible, based on poetry and science.

When I looked for Gassman’s video of his first canto of Inferno on YouTube, I found many comments of normal people who were listening to it again, and reading it again, because during the one year of COVID pandemic, in which Italy was in lockdown almost all the time—and still is, with the highest toll in terms of death, 100,000 dead—it became clear to many what Dante meant in the beginning of the Commedia when he wrote his opening terzina, speaking of fear of Death and the dark forest in which he found himself. 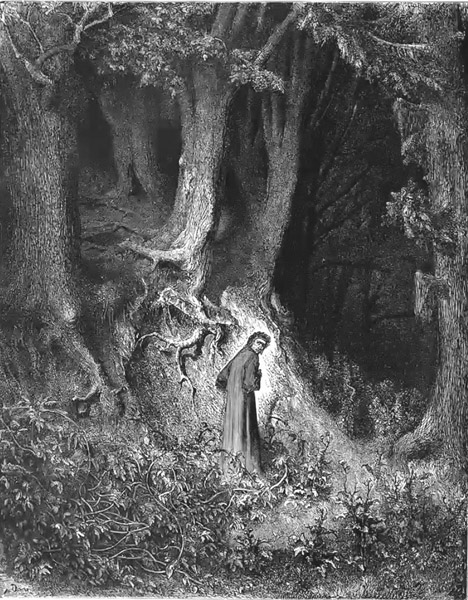 Gustave Doré, 1890
Dante, having lost his way, finds himself in a dark wood.

So, let’s speak about Dante’s Commedia, starting with the first terzinas:

Which, in English, means:

Midway upon the journey of our life

I found myself within a forest dark,

For the straightforward pathway had been lost.

Ah me! How hard a thing it is to say

What was this forest savage, rough and stern,

Of which the very thought renews the fear.

So bitter it is, that death is little more.

But of the good to treat, which there I found,

Speak will I of the other things I saw there.

These are the beginning terzinas of Dante’s Commedia, where you already can hear the power and musicality of his poetic language, and the use of onomatopoeic sounds, that is, sounds which give the idea of the concept or feeling he is transmitting. In this case, fear, emphasized by the many rolled r’s of “esta selva selvaggia e aspra e forte che nel pensier rinnova la paura! Tant’ é amara che poco é piú morte.” (Paura, morte, and amara are fear, death, and bitter.) 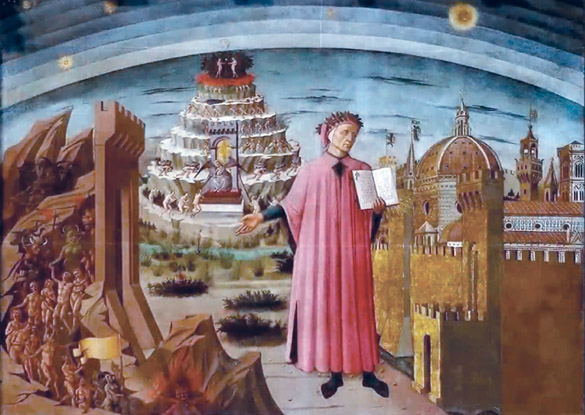 Domenico de Michelino, 1465
Dante, gazing toward Florence, while gesturing toward Inferno. He holds his Commedia open for all to read. Purgatory, and Paradiso are also depicted.

Dante is in the midway of his life—the poet was 35 and exiled—and he is terrified and does not know how to come out of this dark forest. Fortunately he meets Virgil, whom he calls il sommo poeta, the supreme poet, but also Duca e Maestro (Guide and Master), who will guide him in this difficult voyage through Hell and Purgatory; while his guide in Paradise will be Beatrice, the “angel-like woman” of [Dante’s earlier work,] of the Dolce stil novo.

Beatrice appears already in the second canto, when Dante starts to doubt his ability to face this voyage. He says, “I am not St. Paul or Aeneas” (Saint Paul speaks of his voyage to Paradise in his Second Letter to the Corinthians, while Virgil’s hero Aeneas visited the Ade, the kingdom of the dead, in his Aeneid.)

Three women help Dante overcome his fears and doubts: Beatrice is the first one. She appears in this canto and tells him “io son Beatrice, che ti faccio andare” (“Beatrice am I, who do bid thee go”). The second one is the Madonna, who asked Beatrice to intercede to Saint Lucia for Dante. Beatrice will play a very important role in Paradiso, where she represents not only the angel-like woman of the Dolce stil novo (“amor mi mosse, che mi fa parlare”), but she represents also the revelation of God and Science, and she will explain to Dante the physics of the spheres. 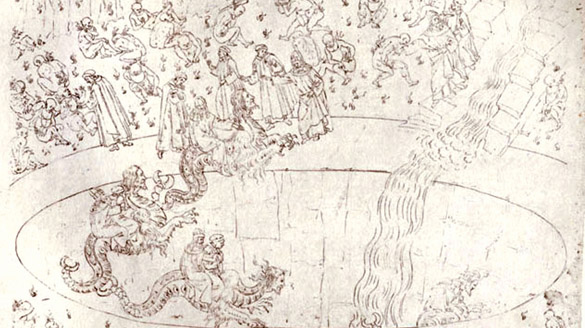 Sandro Botticelli, 1481
In Canto XVII of Inferno, the usurers are punished for their sins against nature and labor. This was written at a time when the great merchant banking houses had started to focus on making money from money as their their primary business.

In Inferno, Dante meets many sinners of his time, including Pope Boniface, who exiled him, and Count Ugolino, who was sent to jail with his children by another corrupt member of the Church, and who had to watch his children starve in jail—an episode which Goethe called one of the highest in poetry and tragedy.

But maybe the most revealing canto, for Dante’s conception of economic justice, is Canto XVII in Inferno, in which he meets usurers who, together with sodomites, are punished for their “sins against nature and labor” (in Italian, “natura ed arte”. But here “art” is not meant as artistic production, but simply as labor, work, as opposed to what Dante calls “súgbiti guadagni” (“rash gains”), a concept in which many Dante scholars see a very strong critique by Dante against not only usurers but also speculators. This was the time when great merchant banking houses started to make quick money from money, as opposed to [from] labor.

In this canto, Dante continues the indictment of the Florentine nobility and oligarchy from the previous canto. Usurers are punished in boiling sand and covered by flames which burn them. It is in this circle that Dante and Virgil meet Geryion, one of the many demons of Inferno, who represents Fraud (“quella sozza immagine di frode,” “that filthy effigy of Fraud”). Usurers have a money bag with the family crest hanging from their neck, and this is how he recognizes them. If he wrote the Commedia today, we should find in this circle people like Mark Carney, George Soros, Klaus Schwab, or Mario Draghi and all the representatives of the Great Reset, all [being] burnt by fire for eternity. 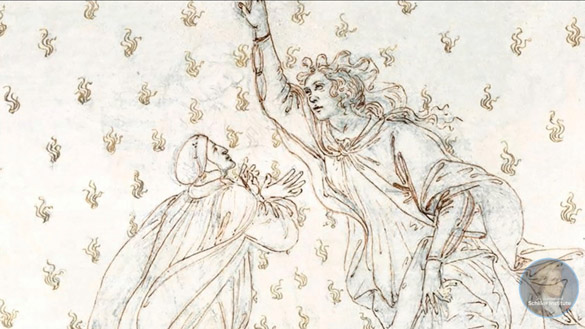 Sandro Botticelli, 1481
Dante and Beatrice, in the second planetary sphere of Paradiso.

Ascent to Paradise and the Stars

In the few minutes remaining, I cannot go into the rest of Inferno and Purgatorio, but I can end with Dante’s ascent to Paradise, which starts a few days after Easter Sunday. Dante and Beatrice are lifted skyward by a kind of heavenly gravity and they visit the nine heavenly spheres (the spheres of the Moon, Mercury, Venus, the Sun, Mars, Jupiter, Saturn, the Fixed Stars, and finally the Primum Mobile, the prime cause of motion, which is God himself).

During their ascent, they discuss questions of religion, including the role of Providence, which works through indirect means, but also [through] individual souls, directing people in various ways. But they also discuss questions of science, with Beatrice explaining, for example, the physics of the spheres and the nine hierarchies of angelic powers. Dante can withstand brief glances at the blazing Sun (the light of Heaven representing God) and ends the last canto of Paradiso, and of his Commedia, with these beautiful words: “l’amor che move il sole e l’altre stele” (“the Love which moves the Sun and the other stars”). And as in Beethoven or Mozart, in which the theme [from] the beginning comes back, we are reminded of the end of Inferno, “e quindi uscimmo a riveder le stele” (“and finally we came out to see the stars again”).

Moderator: Thank you, Liliana. This image that Dante presents of Paradise is so at odds with the sensuous one that many people have in mind when thinking about that, and so aligned with the creative beauty that allows us to achieve an immortality during our lives, that it’s truly an inspiration to reflect on.