News of the GlobalAnti-Malthusian Resistance 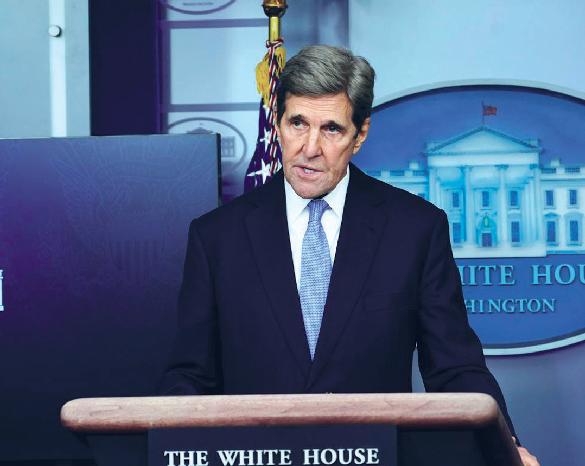 White House
The major technological powers—China, India and Russia—are curiously unenthusiastic about committing “green” economic suicide, as John Kerry, Joe Biden’s “environment” plenipotentiary, has discovered. They would rather build electric power for 800 million who have none.

April 17—This week, the organizing of President Biden’s envoys for his April 22-23 “Earth Day (Suicide) Summit” is being met with international resistance. On the eve of this summit, the International Monetary Fund and World Bank signaled the genocidal intent of the Great Reset and its Green New Deal, issuing a report that outlined a pathway for nations to reduce their debt burdens by dying a green death. Major nations are not submitting. The forces working with Helga Zepp-LaRouche and her collaborators are working to expand the roster of citizens from around the world who are intent on ending the reign of the British Monarchy—certainly bolstered by Prince Philip’s passing on to infernal warming.

As the international British-run propaganda outlets acknowledge, the April 22-23 “Leaders Summit on Climate” may end up short on actual leaders. Or, if certain key leaders like Xi, Modi or Putin actually attend, there may not be agreement on London’s demanded terms of “net zero carbon emissions.” The New York Times noted that while agreements with Japan, South Korea and Canada are expected, “in the latest sign of how difficult it will be for President Biden to make climate change a core part of his foreign policy, similar deals with China, India and Brazil, economic powerhouses that together produce more than a third of global emissions, remain elusive.”

John Kerry, London’s inveterate D.C. swamp creature and newly anointed U.S. Special Presidential Envoy for Climate, has been on an international tour to whip nations into line going into the Suicide Summit, as part of the House of Windsor’s longer arc going into its November COP26 meeting in Glasgow, conveniently located on UK soil. The COP26 meeting was to have occurred in 2020, but was postponed due to COVID. Perhaps the British were relieved, given Trump’s vociferous opposition to the green agenda. A 2018 UK House of Lords report titled, “UK Foreign Policy in a Shifting World Order,” identified that opposition as central to why the U.S.-UK “special relationship” would not survive a second term of Donald Trump. With Joe Biden in the White House, and other British devotees like Kerry and members of the Obama team fulfilling essential functions, London feels like it is back in the saddle again.

However, John Kerry’s tour is starting to look as successful as his presidential campaigns. India’s response to Kerry’s petulant climate lecturing at an International Energy Agency conference at the end of March was expressed in the statement of Indian Minister of State for Power, and for New and Renewable Energy, Raj Kumar Singh, who blasted the net zero carbon emissions as “pie in the sky.” He passionately spoke of the “800 million African people who do not have access to electricity,” and that their development will require the necessary raw materials, ending his spirited comments with, “Africa will need more and more steel, more and more cement, and more and more plastics, and all that is made with carbon. You have to give space for these countries, for them to develop.” Foreign Minister Subrahmanyam Jaishankar had told Kerry that any COP26 resolution will not bind India.

As of this writing, Kerry is stopping in China, while his friend, former Senator Chris Dodd, is in Taiwan, for their coordinated charm offensive aimed at forcing China into the Great Reset, facing military confrontation if they don’t. So far, Xi has not committed to attend the Leaders Summit on Climate, but did attend a China-France-Germany summit on climate change just when Kerry was hoping to meet with him, clearly sending a diplomatic message to Biden’s handlers.

The impact of Biden’s recent, unhinged comments on Russia’s President as a “killer” or on “genocide” in Xinjiang, on Putin and Xi’s attendance at the summit is unknown, but certainly the strategic confrontations over Ukraine and Taiwan are aimed at forcing them into line with the Great Reset and abandoning the economic development perspective of the Belt and Road Initiative or collaboration in space exploration and nuclear energy, including fusion. These British-directed strategic provocations are also aimed at those nations of Africa, South America, Asia, or even Europe who would seek collaboration with China, Russia, India, and other nations for a new paradigm.

Those nations of the developing world have been offered more of the present paradigm by the IMF and World Bank in their new report issued March 26, which essentially offers debt relief in exchange for green death. The report is called World Bank/IMF Support for Debt Relief under the Common Framework and Beyond, and its first paragraph says, “We need to make sure we do not lose sight of green and inclusive reforms because of … a looming debt crisis.” It makes clear that what debt suspension has been granted to developing countries during the pandemic economic collapse, will now depend on “debt for climate swaps,” where the debtors have to trade the closing of their fossil fuel power plants, for example, for the debt relief—population reduction in exchange for debt relief.

The British Monarchy and the London financial oligarchy are increasingly exposing themselves as intending genocide on a scale far greater than Adolf Hitler. That creates fertile ground to organize people out of delusionary faith in the old paradigm, and to the idea of a new reconstruction: Expand the Belt and Road Initiative into a World Land-Bridge as Lyndon LaRouche and Helga Zepp-LaRouche have proposed; build a worldwide health system; and create 1.5 billion productive jobs under the approach outlined by LaRouche’s Four Laws: Glass-Steagall; national banking; government credit to increase physical-economic productivity and living standards; and a fusion driver program.

To mobilize for this, The LaRouche Organization has now sent to the printers the second run of its report, The Great Leap Backward: LaRouche Crushes the Green New Deal Fraud. That report is being delivered to state legislatures, sent to other relevant institutions, and circulated by citizens across the nation. Former Congressional candidate Ron Wieczorek has put up a billboard in South Dakota grabbing attention for the fight of The LaRouche Organization and the Schiller Institute.

All this intersects the fight being waged by those State Attorneys General who are challenging Biden’s Executive Orders and the shutting down of the Keystone Pipeline. But forces mobilizing in the United States must see this is a global battle needing international collaborators, especially in the critical nations of China, Russia and India.