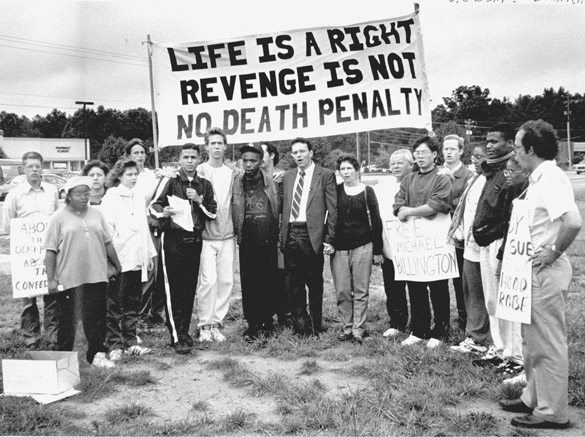 EIRNS
A September 1992 march against the death penalty—from Virginia’s capital Richmond to Washington, D.C., led by Lyndon LaRouche’s vice-presidential running mate Rev. James Bevel—is met and addressed by LaRouche associate Michael Billington (center, necktie), on his way to a Virginia prison to serve a long sentence from the political prosecutions of LaRouche’s movement.

April 17—The Virginia General Assembly and the state’s Governor made Virginia the first state of the old Confederacy to abolish the death penalty, in a signing ceremony March 24 at the Greensville Correctional Center near Jarratt, Virginia, where all the state’s executions had been carried out since 1991. The first execution in Virginia was carried out at Jamestown Colony in 1608 of a man convicted of spying for Spain, and the Commonwealth has executed more people than any other U.S. state. Since 1976, it has trailed only Texas in the number of executions.

Innumerable shady political careers have been built in the state by politicians enthusiastically demonstrating that they could hang, burn, fry, or lethally inject more defendants than anyone else, all too often through false testimony and concealment of evidence. This grisly history has been bipartisan; Terry McAuliffe, the previous Democratic governor of Virginia, signed off on all three death penalty cases which came before him in his four-year term.

Lyndon LaRouche was always known as a principled opponent of the death penalty, and this reversal of over four centuries of Virginia “tradition” represents a victory in his fight for the sanctity of every human life as in the living image of God. Importantly, it also demonstrates the success of LaRouche’s characteristic way of leading a political fight, boldly mobilizing the better angels of our nature, fighting to solve the question, as he put it, of whether society “has the moral fitness to survive.”

In 1997, Lyndon LaRouche personally intervened in the highly charged case of Joseph Roger O’Dell III, eventually executed in Virginia after the U.S. Supreme Court rejected O’Dell’s appeal in a 5-4 vote. Associate Justice Antonin Scalia cast the deciding vote, in the interest of what is called in Virginia law, “finality.”

LaRouche, a resident of Virginia and former Presidential candidate, wrote a letter to the Arlington Catholic Herald, urging that Scalia’s action be repudiated from the pulpit in Scalia’s parish church in Northern Virginia, St. Catherine of Siena. LaRouche wrote:

As long as his [Scalia’s] philosophy is given credence by leaders of the Church, it will mislead faithful Catholics that it is somehow coherent with their faith…. If we forget the Christian appreciation of Genesis 1:26-28, we join the Social Darwinists in that return to paganism, in whose arena there is no moral distinction between man and the beasts, while the mob, acting with Scalia’s endorsement, delivers the verdict: thumbs up, or down. If we repudiate agapē in matters of justice, as Scalia does, then, as the beloved I Corinthians 13 warns, we are as nothing.

The case of O’Dell, who maintained his innocence in this trial for rape and murder and was trying to reform his life from having become “a lost soul,” was one of the highest profile moral issues in that time. European parliamentarians, including a hundred members of Italy’s parliament, appealed directly to President Clinton for clemency. Pope John Paul II also appealed to Clinton.

I come before you to appeal for a man—Joseph Roger O’Dell. I do not know what he has done to be condemned to death. All I know is that he too is a child of God, created for greater things—to love and be loved. I pray that Joseph is at peace with God, that he has said “sorry” to God and to whomever he has hurt. Let us not take away his life. Let us bring hope into his life and into all our lives.

Mother Teresa’s voice recording of the appeal was played in Richmond, the state capital, on radio news broadcasts every hour throughout the day before the execution. But Governor Allen did not commute the sentence. Mother Teresa’s statement was also read to O’Dell just before his execution.

That evening, the Schiller Institute held a candlelight vigil in front of the Supreme Court in Washington. The Institute also organized a vigil at the Norfolk International Airport, attended by Father Tom Carraluzzi, the Episcopal Vicar of the Roman Catholic Diocese of Richmond, and by O’Dell’s widow, Lori Urs O’Dell, who was sending O’Dell’s body to a gravesite in Palermo, Italy for burial. The grave was dedicated as a memorial to the fight against the death penalty, widely viewed in Italy as barbaric.

Father Carraluzzi led the vigil, and Nina Ogden read an “Open Letter to the Nation of Italy,” written by Helga Zepp-LaRouche, wife of Lyndon LaRouche and founder and Chairman of the international Schiller Institute. Zepp-LaRouche pledged that Roger O’Dell’s death would not be in vain. She vowed to continue the fight until the death penalty is ended in the United States. She also urged in the letter that President Clinton exonerate Lyndon LaRouche, falsely convicted and imprisoned by his political enemies. “Only in this way,” she wrote, “will the barbarians in the Department of Justice and Supreme Court like Antonin Scalia, who believe in mob rule, be ousted.”

Now, more than two decades later, the call for the moral fitness to survive must be raised anew by greater numbers, in greater urgency, so that our souls and consciences are not ruined and in failure and surrender—because we are confronting the fact that barbaric practices such as the mass genocide of millions of people in Syria are now happening, as the cynical and deliberate policy of the British and U.S. governments—in our name! According to an international appeal by Cardinal Mario Zenari, Apostolic Nuncio to Syria, 90% of the population of Syria is at the brink of starvation because of war, and because of the continuing “sanctions” against that nation, the most cruel kind of war against a civilian population. The time is running out for international action for aid and reconstruction to begin.

A former prosecutor in Prince William County, Virginia, who almost single-handedly made that county number-one in the nation in death penalty convictions, retired as Commonwealth’s Attorney in 2018 after losing his last case, and told the Washington Post in an interview, “People just aren’t as pro-death anymore.”

If he is right, genocide, starvation, epidemics and war can be stopped, at this late hour.