This editorial appears in the April 30, 2021 issue of Executive Intelligence Review.

by Anita Gallagher and Mike Billington 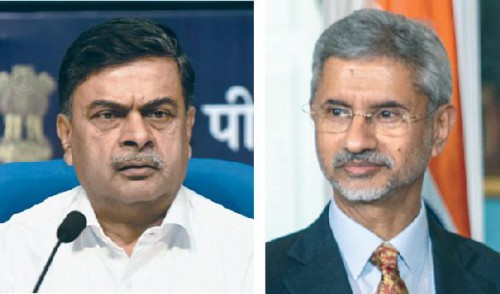 April 23—The unsigned editorial in the April 18 Global Times, “To Deal with Climate Change, China-U.S. Cooperation Is Important and Sensitive,” absolutely rejects the Malthusian dictates of the Green New Deal, demanding instead that developing nations must have access to fossil fuels to break free of poverty, to become modern industrial nations. Global Times is under the direction of People’s Daily, the newspaper of the ruling Chinese Communist Party, and thus the editorial reflects the official outlook of the governing party of China.

This statement of China’s policy advances the growing anti-Malthusian movement being championed by the LaRouche Movement and the Schiller Institute. Indian Minister of State for Power and New and Renewable Energy, Raj Kumar Singh, on March 31 blasted the net zero carbon emissions as “pie in the sky.” He passionately spoke of the “800 million African people who do not have access to electricity…. Africa will need more and more steel, more and more cement, and more and more plastics, and all that is made with carbon. You have to give space for these countries, for them to develop.” Subrahmanyam Jaishankar, India’s External Affairs Minister, told U.S. Green New Deal Czar John Kerry that any COP26 resolution will not bind India.

The Global Times editorial begins with reserve, pointing out that after the U.S. and China special envoys for climate change met over April 15-16, it is “fair to say that China and the U.S. have communicated quite effectively and achieved some results.” At the time, President Xi Jinping had not yet agreed to speak at the Earth Day Summit organized by President Joe Biden for April 22. There are indications that the Biden Administration was demanding that Xi agree to stop building coal plants immediately, rather than the Chinese policy of reaching a “peak” of new coal fired power plants in 2030. Xi did speak at the April 22 Summit, and China’s policies were not directly attacked, but neither did President Xi change China’s policy regarding new coal-fired power plants “peaking” in 2030.

The general environment among the big powers is not good. The U.S. wants to show leadership by working with China and Russia to address the climate challenge, while it is also obstructing China and Russia in other spheres. That is not what normal relations among great powers should be like.

But then the principle of economic development against environmental extremism is clearly stated:

UN climate action involves the fundamental interests of humanity, and the specific arrangement for reducing emissions concerning all countries’ major development interests. The developed countries have completed industrialization, while developing countries are still in the process of industrialization, and some have just started this process…. People’s living standards are still low in these countries, and it is particularly important to create more resources to improve people’s livelihoods through further industrialization. Their right to subsistence is different from that of developed countries.

‘Countries Should Be Vigilant’

A tough stance is the biggest feature of U.S. foreign policy in recent years. The U.S. does not hesitate to push forward its domestic agendas through confrontation. From resisting the Paris Agreement to leading its implementation, will Washington use national strength as a lever to force other countries take more obligations while it is seeking more interests? Countries should be vigilant against this.

The result of imposing carbon dictates immediately would be the permanent immiseration of much of the world, the editorial states:

In an extreme scenario, if the world is about to promote carbon neutrality today, then the world’s economic development pattern will be perpetuated as it is today. The development gap between the developed and underdeveloped countries will become permanent. The U.S. elite have disputes on many issues, but they have the same fascination with U.S. hegemony.

The editorial notes that, although China and the U.S. are the largest emitters, “the two countries have huge differences in population and economic development, but the U.S. wants China to take more responsibilities in reducing emissions. It is worth observing the relation between such [environmental] pressure from the U.S., and the U.S. geopolitical move to pressure China.” The editorial re-states China’s policy, to “achieve peak carbon dioxide emissions before 2030 and carbon neutrality by 2060.” It asserts that “China is also totally sincere on the desire to cooperate with the U.S. Nonetheless, the deterioration of the international environment is self-evident, with the U.S. strategic plot to contain China being overt.”

We should promote that the common interests of humanity are jointly defined by the interests of people from all countries, rather than by a handful of countries that want to monopolize this definition.

Schiller Institute President Helga Zepp-LaRouche, in response to the Global Times editorial, said it expressed a clarity that would not have come about without the LaRouche movement’s organizing and publications exposing the Green New Deal. (See The LaRouche Organization’s new pamphlet, The Great Leap Backward: LaRouche Crushes the ‘Green New Deal’ Fraud.)

She called it the strongest statement since the 2009 announcement of the G77 nations that they would not sign the Copenhagen “suicide pact” of population reduction. China and India rejected any policy that included enforcement mechanisms restricting carbon emissions.

At that 2009 COP-15 event in Denmark, the Chairman for the G77 delegation, Lumumba Stanislaus Di-Aping from Sudan, told the forum: “We will not die quietly. We have been asked to sign a suicide pact, an incineration pact in order to maintain the economic dependence of a few.” He particularly enraged the imperial oligarchy when he said the proposed deal was genocide on the scale of Nazi extermination camps: “It’s a solution based on values that funneled six million people in Europe into furnaces.” While this statement may make the oligarchs uncomfortable, the head of the UN’s World Food Program, David Beasley, has already warned that the current global food crisis threatens the death by starvation of 270 million people—vastly exceeding Hitler’s record—and that is just this year. Were Africa’s access to coal-fired plants to be denied by the Green Malthusians, that number would expand exponentially.