The Chorus for Peace and Development Continues to Resound 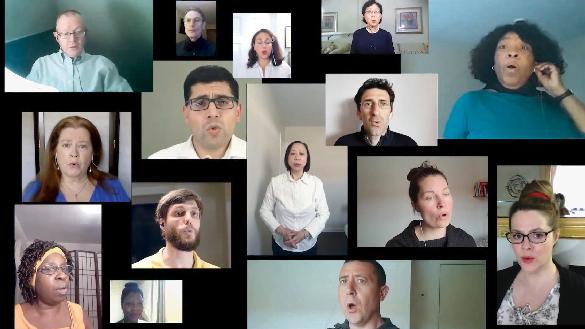 Schiller Institute
Some of the Schiller Institute choral performers in its live-streamed concert, April 25, 2021, “Beethoven’s Credo: Believe in the Future—a World Without War,” dedicated to the “Spirit of the Elbe.”

May 2—On Sunday, April 25th, the Schiller Institute choruses presented a live-streamed concert that featured a profoundly soul-searching selection of Classical compositions, performed both live and virtually. The concert, titled “Beethoven’s Credo: Believe in the Future—a World Without War,” was dedicated to the Spirit of the Elbe and was a continuation of the Beethoven 250th Birthday celebration. The concert featured a virtual performance of Beethoven’s Credo (from his Missa Solemnis, Opus 123), which you can watch here, Mozart’s Ave verum corpus available here, as well as a selection of African-American Spirituals and songs by Handel.

While many choruses and arts organizations were forced to pull back during the Covid-19 lockdown, the Schiller Institute NYC Chorus pushed ahead, despite the challenges, because of the importance of singing beautiful and profound music in times of crisis—music, which connects us at the higher level of humanity as a single immortal species. The concert began with remarks by Schiller Institute NYC Chorus Chair, Jen Pearl, followed by an introductory video on the “Spirit of the Elbe,” the 76th Anniversary of which was April 25.

This joyful and beautiful concert was occurring in the context of a world fraught with crises, including an increasing potential of world war, and starvation in Yemen and Syria. Solving these crises requires a change of heart and soul from the Western world (Europe and the United States). We need to rapidly reject the moral indifference that has dominated our culture for decades. While you certainly cannot outlaw bad culture, a commitment to optimism and the future by working with other nations on economic development and science and Classical culture, can quickly reverse the current paradigm. Confucius is famously quoted saying that the state of a country can be seen in the quality of its music. Immersing your mind and soul in the works of great Classical composers can lift the human soul and spirit.

As Helga Zepp-LaRouche, Schiller Institute founder and President, stated in her recent Open Letter to Classical Music Lovers in the Year of Beethoven:

Where else, other than in Classical music, can one strengthen and deepen the passion needed to look beyond one’s own concerns and to address the great objects of humanity? Or where can one educate the sensibility needed to fulfill Schiller’s demand, as stated in his speech on universal history, “A noble longing must glow within us to add from our own resources our contribution to the rich legacy of truth, morality and freedom, which we have received from former ages, and must deliver richly increased to the ages to come; and to fasten to this imperishable chain, which winds through all the generations of men, our own fleeting existence.”

The beautiful concert program reflected the very best of mankind’s creativity, with Classical compositions sung by soloists and the chorus. But, they were performed within a world where the very worst actions being done by the hand of human beings, toward entire nations and populations of children. Beethoven once said that if people understood his music, there would be no war. We are at a point in history where the population should not and cannot settle disputes with violence.

On April 25th, 1945, American and Soviet troops met from the west and the east at the Elbe River near Torgau, Germany, south of Berlin, ensuring an early end of the war, and thus was born what has become known as the “Spirit of the Elbe.” Now more than ever, is that spirit of brotherhood and peace needed. 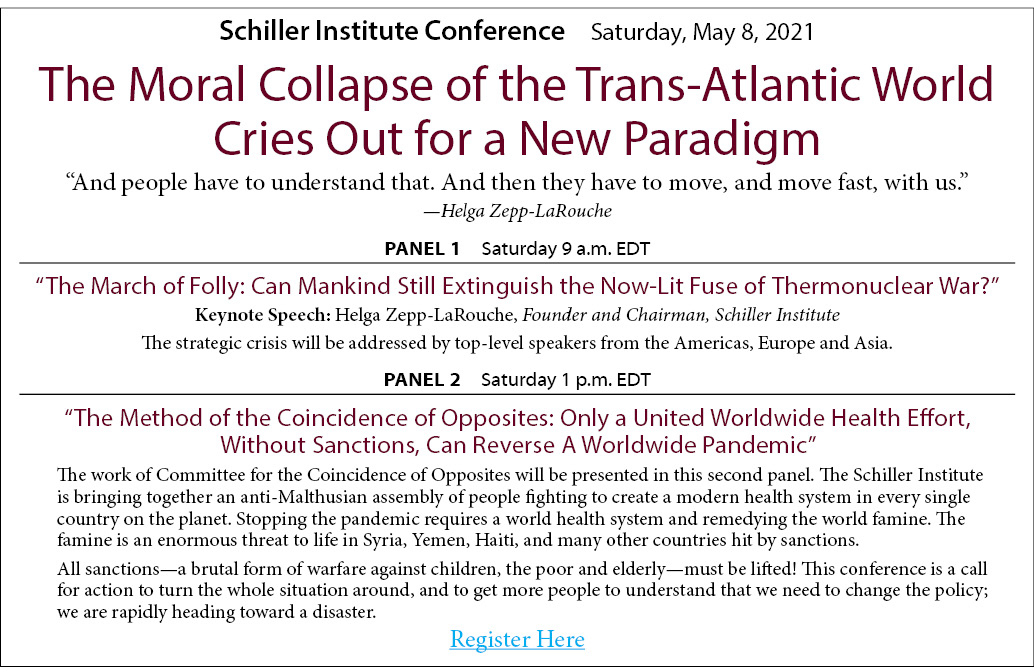 Register for the May 8, 2021 Schiller Institute Conference