If one should desire to know whether a kingdom is well governed, if its morals are good or bad, the quality of its music will furnish the answer.

May 16—Can something similar to this Confucian concept be stated regarding one’s judgment of character, about the constitution of an individual person? If asked to give your impression of Louis Farrakhan, Minister of the Nation of Islam, what would be your response, what comes to mind? How many of our readers associate Farrakhan with the violin? With Ludwig van Beethoven? 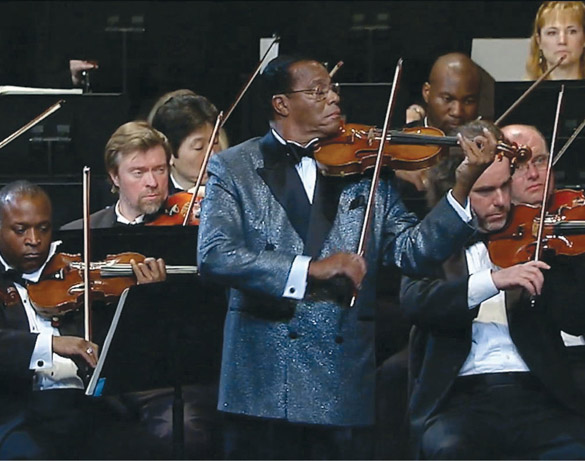 The Honorable Minister Louis Farrakhan of the Nation of Islam performed Beethoven’s Violin Concerto in D Major, Op. 61 in 2002, and released it in a live-streamed concert on his 88th birthday, May 11, 2021: “The most important cultural contribution from the United States this year.” —Helga Zepp-LaRouche

In the Americas, in Africa, in Asia, and even in Europe, thousands of online viewers simultaneously experienced an all too rare moment of universal truth: The Nation of Islam’s Honorable Minister Louis Farrakhan performing Beethoven’s Violin Concerto in D Major, Op. 61, a performance recorded on February 13, 2002, but only released in a live-stream video on his 88th birthday, May 11, 2021. This was also timed to celebrate the 250th birthday of Beethoven. Over 8,800 people watched the concert live, and as of this writing over 50,000 people have viewed the concert on YouTube. The video can be viewed here.

Helga Zepp-LaRouche, the founder of the Schiller Institute, had urged that the 2020 celebrations of Beethoven’s 250th birthday be extended, while the world struggled to protect itself from COVID-19, and while supporters of the Institute worked towards bringing about modern healthcare systems and basic economic infrastructure in all nations of the planet. In the same spirit, Minister Farrakhan issued an announcement on Twitter on May 11 stating: “For my 88th birthday, I am celebrating the 250th birth anniversary of Ludwig van Beethoven with the world premiere of my performance of the Beethoven Violin Concerto. I am inviting everyone to watch tonight at 7pm CDT.”

Farrakhan the Violinist … in His Youth

At a tender age of 5 years and 11 months, as Minister Farrakhan explained during the concert, his Mother emphatically insisted that he master the violin. (He called on all mothers to instill in their children a disciplined passion for something similar.) A turning point in his musical studies came at the age of nine, when he attended a live Boston Symphony Orchestra performance, where violinist Jascha Heifetz performed Beethoven’s Violin Concerto in D Major. Heifetz’s playing profoundly moved him, and he became enamored with the artistry of Heifetz, whom he now considers to be the greatest violinist of his time, and captivated by the Beethoven piece. Even to this day, he proudly displays, and highly cherishes, an autographed program of this Heifetz Concert obtained back stage after the concert from the master himself. With this memory, so ardently alive within him, he embraced his violin study, practicing six to eight hours per day as a regular daily routine.

…And as an Adult

Minister Farrakhan attributes his return to the violin as an adult, to Sylvia Olden Lee, master musician, pianist, and music coach to Metropolitan Opera singers, who was a dear friend of Lyndon and Helga Zepp-LaRouche. Minister Farrakhan attended the Centennial Celebration of Sylvia Olden Lee’s birth held in Carnegie Hall in New York City on June 29, 2017. The Minister reflected on his debt to Ms. Lee after his performance of the Beethoven Concerto:

Sylvia Olden Lee was the greatest influence in my return to the study of the violin after forty-two years of no formal training. As a youngster, I hoped to become a great violinist, but my life took another course, and I gave up the violin for my Ministry.

I met Sylvia Olden Lee in the late 1980’s and invited her and Elvira Green [a soprano in the Metropolitan Opera company who was coached by Sylvia Olden Lee] to have dinner with me. Later that evening, I got my violin and began to play part of the Mendelssohn Violin Concerto, and Ms. Lee went to the piano to accompany me!

She later arranged an invitation from the National Association of Negro Musicians, of which she was a member, for me to play my violin with her accompanying me at their National Convention.

Ms. Lee encouraged me to “seriously” play my violin again, so I hired a teacher and renewed my musical journey…. My love, respect, and deep appreciation for her is limitless. In the twilight years of my life, I will carry her in my heart to my last breath.

In 1991, violinist Elaine Skorodin Forman, a student of Heifetz, became his teacher, preparing and coaching the Minister’s professional technique and mastery of the extremely difficult Mendelsohn Violin Concerto, which he performed in concert on April 17, 1993, at the age of 60. However, even Forman, his professional teacher, doubted that this pupil of hers could master the Beethoven Violin Concerto. From the perspective of a professional violinist, she was quoted telling him, “You know Minister, even I cannot be ready in ten years” much less in six months’ time, to work and perform this piece by Beethoven. Such a daunting undertaking, to prepare musically, mentally and physically, even for professionals, is one huge challenge.

So how was it that self-taught violinist Farrakhan came to publicly perform “the impossible,” in his 2002 premier concert of Beethoven’s Violin Concerto in D Major? In an introduction to the release of the concert this month, Ayke Agus, an acclaimed professional violinist, who subsequently became the Minister’s teacher, said that her first response was “That’s impossible!” That an amateur should not attempt such a challenge, let alone doing so in five months’ time. But Ms. Agus, who had served as the personal accompanist and protégé of Jascha Heifetz until his passing in 1987, went on to provide a vivid account of the process, revealing a great deal about the character of both Ms. Agus, the teacher, and Farrakhan as a student.

Their association began after Farrakhan read Ms. Agus’ book on the life of Jascha Heifetz, and he contacted her by way of written correspondence. Agus then invited the Minister to attend a Master Class she was giving in Chicago, which was followed by an informal, private hearing of Farrakhan playing the Beethoven piece live for her and her husband. This led to her five- to-six-month period of coaching sessions, and Farrakhan’s strenuous practice routine, resulting finally in the concert performance.

Ms. Agus recalled her first impression of the Minister’s Beethoven:

I was blown away by the fact that he learned it by himself. There were a few little mistakes, here and there. But his sound, the type of sound quality, tone quality of his playing was so passionate. And so truthful—you know, it was like the truth. People say the kind of sound you make out of an instrument, string instrument, is the mirror of your soul. So you can’t hide…, I just heard the truth. I heard love and the truth.… I didn’t even know what the Minister was about [otherwise], [but what] I just heard [from] the Minister was the truth….

On that occasion, she said, Farrakhan showed her his treasured autographed copy of the concert program from Heifetz’s performance of the Beethoven Violin Concerto with the Boston Symphony Orchestra, conducted by Serge Koussevitzky.

Following this initial hearing, the Minister asked her if she would teach him the Beethoven Concerto. “I told him immediately, ‘Yes, I will help you’.”

In Farrakhan’s post-performance comments in 2002, which are included in the video, he introduced two young black violinists who were part of the orchestra. The first was a 19-year-old woman, who had sent the Minister a video of herself playing the Sibelius Violin Concerto, which Farrakhan said had left him in tears; and then a young man, who had sent him a video of himself playing the Tchaikovsky Violin Concerto, again causing a torrent of tears. Of these two talented Black youth, Farrakhan said they were “all that I had hoped to be, and then some.”

He told the audience that it were necessary to bring such classically trained Black musicians to the front of American stages in order to reach out to the Black community to become more engaged in classical culture—the exact opposite of the “cancel culture” idiocy which wants to eliminate “dead white males” from education.

Minister Farrakhan thus is addressing racism as the crime it actually is, while suggesting the means necessary to defeat the intended effect of that crime, by seizing, through the discipline and gift of Classical culture, a truly human identity, despite racism’s evil intention. In this way, when this path is taken, civilization may not be deprived of the moral potential, expressed by the development of great talent into genius, which would uplift and transform that entire society.

Pathway to a New Paradigm through the Coincidence of Opposites

Whether or not it was intentional, the world premier release of Minister Farrakhan’s Beethoven Concert as a continuation of the Beethoven Year celebration, now, at this dangerous strategic moment in history, lovingly directs all the world to accept the appeal to seek a New Paradigm issued by Mrs. Helga Zepp-LaRouche. In response to viewing the Farrakhan concert, Zepp-LaRouche said that the Minister’s intervention was “the most important cultural contribution from the United States this year.”

Over the past year, Zepp-LaRouche has urged world leaders and society in general to collaborate in an endeavor which would snatch humanity back from the precipice of total annihilation in outright general thermonuclear war started by Western military forces, whose NATO-led actions persist in crossing red lines and violating the sovereign rights of the nuclear-armed nations of Russia and China.

Mrs. Zepp-LaRouche, as her famous husband Lyndon invariably did, chooses the moral high road toward crafting an all-encompassing solution that addresses the growing global famine, disease, nuclear-war brinkmanship, and moral indifference that pervades the Western nations.

She is actively spearheading the Institute’s “Coincidence of Opposites,” an Anti-Malthusian resistance movement. This international organizing tendency paves an entirely new direction toward cultural, social, political, and economic cooperation on a world scale. It is predicated upon the ideas of Nicholas of Cusa, in which individuals are tasked with examining and overturning what they believe, or thought was true, in exchange for arriving at the discovery of a higher subsuming notion which unifies the many different notions, in one Humanity.

Key to this process of self-development is the study, performance and composing of Classical art forms.

What is the Classical Principle?

Lyndon LaRouche, ever quick to demystify this fundamental premise of true art, said in his “How to Reconstruct a Bankrupt World” (published in EIR, Vol. 29, No. 50, December 20, 2002):

Man is capable of discovering, and mastering, universal physical principles, by which man increases his power in, and over the universe. By great art, and by great science, we imbue in children and students, an understanding of this ability to discover universal physical principles. People so educated, in Classical culture, in Classical science, look into the face of another person, and love that person, this quality of creativity, which distinguishes man from the beast.

And there, we understand our immortality. When we generate, and transmit, discoveries of principle, to our children, to those who come later, we live forever in the history of mankind. Our mortal existence is no longer a matter of a beginning and an end: Our mortal existence is a place in eternity, from which we radiate the experience of generations before us and radiate our existence into the future. We become the immortal children of the Creator of the universe.

Nothing is impossible—when the human spirit is capable of rising to meet the challenge!

Diane Sare and Mike Billington contributed to this article.