The following are excerpts of two interviews, translated from German, the first with Rainer Seidl, a leader of the Land Creates Connection farmers organization in Bavaria, Germany (Landschafft Verbindung Bayern), February 7, 2021 at the site of a farmers’ protest action in Munich; and with Alf Schmidt, an independent farmer in Thuringia, at the site of a farmers’ protest action in Berlin. Both interviews were presented as part of the second panel, “The Method of the Coincidence of Opposites: Only a United Worldwide Health Effort, Without Sanctions, Can Reverse a Worldwide Pandemic,” of the May 8, 2021 Schiller Institute conference, “The Moral Collapse of the Trans-Atlantic World Cries Out for a New Paradigm.” Q: What is the reason for the demonstration?

Rainer Seidl: Hello. The Plant Protection Action package must be revised…. We here in Bavaria have been conducting insect control very well for decades, and have many pioneer programs for flower strips, meadows and so on. And it is voluntary and works well…. The new law will designate areas, and ban plant protection products and fertilizers, which in our opinion amounts to expropriation, because the management we do, which is needed, will no longer be possible.

Q: The German Federal government policy is part of the EU “Green Deal” and “Farm to Fork” program. A U.S. Department of Agriculture study shows that if it is implemented, there will be less food production in Europe, producer prices will fall, and consumers will have to pay more. What do you say?

Seidl: The Green Deal is, of course, a huge cut in agricultural production. It provides for 30% of the agricultural land across Europe to be returned to nature. The same applies to the seas bordering Europe. Pesticide use is to be restricted by 50% by 2030, and fertilizers by 20%. For Germany and the EU, the whole package means that food production will be severely restricted and reduced, so that Europe and Germany will have to import food on a very large scale in the future.

Q: If you outsource food production from Europe, that means that trade and the big cartel food companies will become all the more important?

Seidl: Yes, trade is a problem, because it is subject to the free market economy. It has happened in Germany, in particular, in the past, that the Big Four [supermarket chains in Germany]—REWE, Lidl, Aldi, Edeka—dominate 85% of the food market, retail, plus processing, and this naturally leads to a strong concentration in the food trade. We also believe that they also determine food prices. We are just the lowest link; there is nothing left for us as it is at the moment.

Q: Don’t you think that parity prices would be better and cheaper than the current EU subsidy system for farmers?

Seidl: This had been the policy once upon a time, by the EU’s predecessor, the European Economic Community (EEC). This is a basic requirement of ours, that we need cost-covering prices again. Under the subsidy policy the big trading companies really get it, because they calculate what the farmer has to get, so that the farmer can grow bread wheat or beets, and the companies can dominate. I speak for many farmers, in saying that we should move away from this subsidy policy, and that we once again can generate our income from the products that we produce, and thus respond quickly to society’s demands and needs.

The entire interview with Mr. Seidl, in German, may be watched here.

Alf Schmidt: I am the organizer of this farmers’ demonstration. We have been demonstrating here since January 26. We have already held out here at –15 degrees [Celsius]. We are farmers of all branches. I myself am an independent free farmer, I do not belong to any association, or any club. That is the advantage of this demonstration: No farmer has to place himself under any flag. Every association, be it vegetable farmers, fruit farmers, crop farmers from very different associations, all are equal partners in this demonstration. 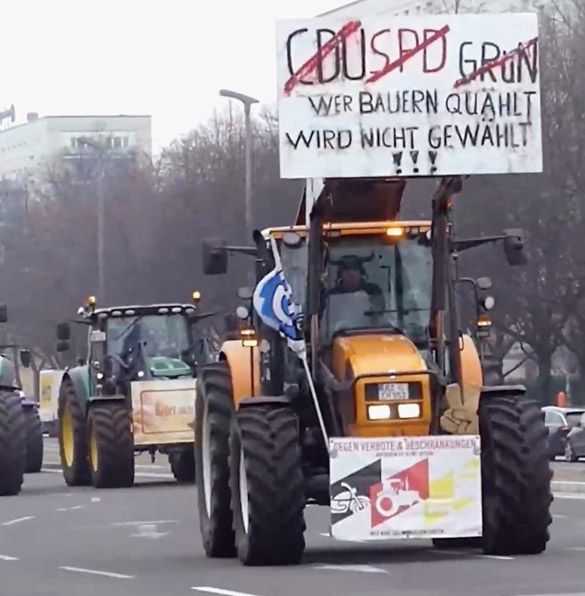 BüSo
German farmers demonstrate for the right to grow food and get fair prices. They reject the Green Deal policies of the EU and the German political parties. The sign reads: “No to the CDU, SPD, and Green parties. If you torment farmers you will not get elected!!!” In German, it rhymes.

Q: What are the demands of the farmers who are demonstrating here, who also demonstrated yesterday at the Brandenburg Gate?

Schmidt: We have several demands. One of our demands, why we actually started here—is fair market prices for farmers. Farmers do get some subsidies, which everyone gets upset about, saying you’re getting a lot of money from the state. But these subsidies are actually used to support the products.

I am a sheep farmer, for example. When I deliver a lamb, I get €2.6 per kilo. But the lamb costs me €5.74 per kilo to produce. These are my full costs in the lamb sector. That means the rest is supported by the state so that food prices are not pushed too high. But government supports are not enough. And we don’t want them. We want to get decent wages for our normal work….

Q: There are some things we fight for as BüSo. The first step would be immediate parity prices, that is, price increases that have the goal of guaranteeing the farmer that he can farm. The second step would be national emergency programs for family farms and farmers in need.

Schmidt: I’m with you on that.

Q: The third is to double food production worldwide, which means we need twice as much food. According to the World Food Program, an incredible 270 million people are at risk of hunger this year. That does not help when some people say the rich ones should give something to the poor ones. This food must be produced. Only then can you give something away. And now we are taking production areas out of production, under senseless pretexts.

Schmidt: I also had bees two years ago, but I stopped because of Save the Bees. The beekeepers—old men over 55, like me—were told “If you want to keep bees, you now have to get certified. You have to attend seminars and have proof that you can keep bees.” What have people been doing for 50 years? We’re supposed to have some idiot from some government office explain to us how it works!? The end of the story was that we said we were going home and burning our hives. Many people quit the job. I quit too, and that saved the bees.

Q: You confronted the CDU deputy on stage yesterday: “If you don’t support us now—”

Schmidt: No, I said: “If you let our farms go bust, we will make you unemployed!” This sentence has gone through all of Germany. People have written to me from all corners. I have read it 100 times tonight. Everyone answered me. I said “Yes, I did that, I said that.”

Q: I also find it remarkable that you want to get personally involved in the election campaign.

Schmidt: Yes, I’m all in. In the Bundestag I announced [my candidacy] on February 10, when the Insect Protection Act was introduced. I announced it from the stage down here.

We have now printed thousands of posters, which are already hanging out in Schleswig-Holstein. They have been going up a bit faster than the others; the printers were a bit quicker. They’re hanging on every street, on every trailer. They hang on the straw dolls. On these posters we explain what everybody needs to know. We’re now intervening in the parties’ election campaigns, because if they destroy the countryside, after all, they’re not just destroying our farms, they’re destroying the countryside and us farmers.

Now you see how nice we farmers are, and you can ask us anything, really. However, we are always considered the biggest pigs in the nation because we poison everyone. When we spread manure, they say: these pigs are spreading manure. Can you imagine that? But the plants need the manure to grow, and without it you can’t produce plants.

There is a textbook that a colleague of mine found. There’s a cow painted on it, and the cow has produced a patty. There’s an arrow pointing to the patty, and behind it says, “nitrate input.” That’s the problem—not the milk or the meat or how food is produced, but the nitrate input.

The entire interview with Mr. Schmidt, in German, may be watched here.