This transcript appears in the May 21, 2021 issue of Executive Intelligence Review.

Join or Die:
Why a World Health Platform Protects Each of Us

Dr. Elders is a former Surgeon General of the United States. This is the edited transcript of remarks she delivered to the second panel, “The Method of the Coincidence of Opposites: Only a United Worldwide Health Effort, Without Sanctions, Can Reverse a Worldwide Pandemic,” of the May 8, 2021 Schiller Institute conference, “The Moral Collapse of the Trans-Atlantic World Cries Out for a New Paradigm.” 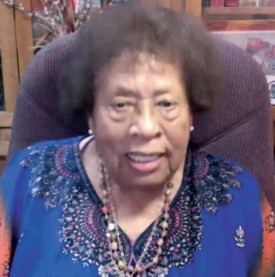 Good Afternoon! I am particularly happy to address you today, both those of you who have been with this effort from its beginnings last year, and those of who you may be joining us for the first time this morning.

Greetings to Helga and all of you assembled around the world for this conference of the Schiller Institute. At the outset, I am pleased to report that our Committee has made some tangible progress in our efforts to bring together our sometimes-divergent forces for what we call a “coincidence of opposites.” We have succeeded both in the United States and internationally in the initiation of our primary demonstration projects, and my job today is to say something about the context of these projects, which are only a beginning, but conclusively show what can be done.

The theme of today’s; conference, is “The Moral Collapse of the Trans-Atlantic World Cries Out for a New Paradigm.” What is that moral collapse? It is a collapse of the standards of excellence, standards which demand of us more than we believe we can do, more than we believe we can give, and, sometimes, more than we believe that we can endure. In a world of turmoil such as we now inhabit, excellence is not an option. Excellence is a necessity. We must be physically capable, intellectually qualified, and emotionally committed to not giving up until the problem before us is solved, until the job is done. It is, however, of great concern to those of us that have tried to live our lives according to these standards, and have recommended these standards to all, that our nation should now relinquish its standards of excellence in favor of a comfortable, but perhaps deadly mediocrity.

Let me give an example.

We are talking about defeating a world pandemic with vaccines, but what about water and food? It should be obvious to all of us that without clean water and nutrition, there is no health. It would be foolish for us to embark upon an effort to contain the pandemic if we did not simultaneously design how the problem of food and water has to be addressed in the poorest of nations on our planet. Over 2 billion people on the planet do not have access to clean water; 2.5 billion people experience some degree of food insecurity, including 41 million right here in the United States.

David Beasley [Executive Director] of the World Food Program says that more than 270 million face potential death from famine, this year. According to the World Bank and WHO, half the world lacks access to essential health services. 1.6 billion people lack adequate housing. An estimated 1.2 billion people do not have access to electricity. Whether or not people have access to electricity is a marker as to whether or not they have an essential tool to overcome sickness. How do you run a hospital, store essential medicine, or preserve large quantities of food [without electricity]?

The Pandemic Is a Failure of Morality

Given this situation, is it a surprise that we have a COVID pandemic? Given the failure of many governments especially in Europe and the Americas to respond rapidly, compassionately and scientifically to this outbreak, is it a surprise that this pandemic is still not under control and we are seeing alarming rates of spread planet-wide, new variants from India to Brazil to San Francisco?

I said at the onset of this pandemic, that the world may always have disease, indeed we may always have epidemics, but there is no necessity to have a pandemic. A pandemic disease spread in the twenty-first century is a failure of morality, not of medicine. Indeed, this moral collapse is manifest, as an indifference to the misery and suffering of our fellow human beings around the globe. It is not only immoral, but it is self-defeating, medically and otherwise, to simply accept these conditions.

Clean water and food are basic rights, like the rights of life, liberty, and the pursuit of happiness. You won’t be alive if you don’t have food and water, you won’t be free because you won’t be allowed to be alive, and you certainly won’t be happy. So if you believe in what you call the inalienable rights of the Declaration of Independence, then you have to believe that it is the inalienable right of everyone on the planet, especially the young who are not responsible for the conditions of their birth, to have clean water, food, and medicine, if not for their sake, for your own sake and that of your nation.

Water, food, housing, and health are not privileges or luxuries. They are necessities for all of us, and for each of us, because as we see today, we neglect these things for our fellow human beings at our own peril. They cannot be provided only to those who can “afford” them. That is the suicidal economics of indifference. None of us, in our electronically interconnected world can afford that these necessities not be made affordable to everyone. That is the economics of self-sustaining compassion.

Without provision of these fundamental necessities there can be no effective defense of public health, which must be a planet-wide concern. This is the lesson of the pandemic. Unless, we come to recognize this basic truth, we may all perish. As Helga and the Committee for the Coincidence of Opposites have been stressing, we must create a world health platform. Every nation must have a modern health delivery system. This means not only hospitals and trained personnel but infrastructure, roads, bridges, transportation networks, electricity, and so forth.

The Young Must Stand Up

This can be done. We have the resources. But we must once again acquire the standards of moral excellence required to do what only seems impossible. Nations working together can get this done. The Committee’s pilot projects: community healthcare workers in Washington, D.C.; and our food and medical personnel project in Mozambique; are demonstrating how an effort which unites people of diverse backgrounds and interests can get something accomplished. You will hear much more about that now from our speakers who are directly involved in these projects.

But again, I say, indifference, complacency, apathy are our enemy. They are the pandemic we must defeat. We need individuals of all ages, and especially the young, to stand up and say, “I will do my part to correct these injustices and to work from this day, in whatever way I can, to create a better world for all humanity.” That is the standard of excellence that may be the minimal condition for our continued survival on this planet, and our health as a one human race, which chooses unity over division, health over sickness, and life over death. We must listen to the cries of all other nations. Learn of their needs, so we can lead them to the path of excellence.