This transcript appears in the May 21, 2021 issue of Executive Intelligence Review.

‘Physician, Heal Thyself’:
Saving a Nation in Crisis Through Love

Robert Smith, Jr. is the Pastor of New Bethel Missionary Baptist Church in Detroit, Michigan, and Chairman of the Foreign Mission Board of the National Baptist Convention, USA Inc. This is the edited transcript of excerpts of a longer interview Pastor Smith provided to the Schiller Institute. It was presented by video to the second panel, “The Method of the Coincidence of Opposites: Only a United Worldwide Health Effort, Without Sanctions, Can Reverse a Worldwide Pandemic,” of the May 8, 2021 Schiller Institute conference, “The Moral Collapse of the Trans-Atlantic World Cries Out for a New Paradigm.” 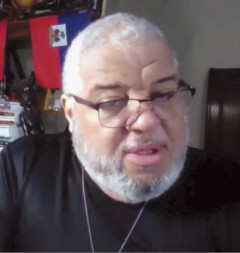 The Pandemic and Replenishing Your Faith

You have to allow every day to be a new day. In the book of Isaiah, it says that God makes all things new. And of course, in the New Testament, it talks about the spring of living water that’s in your belly. And as a country boy, I know what a spring is. We had a spring in Wilcox County, and the beauty of it was that when everything else froze, a spring won’t freeze. The ice can pile up higher and higher, but it keeps coming.

I have been through some very low points during this pandemic. I have had 57 funerals. That can get so bad, to when the phone rings, you don’t want to answer, because you know it’s going to be a thing about somebody else is gone.

And today, I’ve just been trying to struggle through the fact that India, one of the poorest places, and the poorest people, is suffering the largest number of new virus attacks now. And that’s just hard to think of.

How could God be all-benevolent, and all powerful, and yet, send people to Hell? Sometimes you raise that question: If God is all loving—we’re his children, and he’s all powerful—so why does he let a three-year-old walk in the street, get hit by an automobile and killed, while his mother is on the porch smoking weed and drinking wine? And then they notice the child. And God could have stopped it at any time.

Why Was Pastor Smith, a Christian, Supportive of The Nation of Islam?

Now, I was all but Muslim under the Honorable Elijah Muhammad, but I loved the teachings because they were the only people dealing with guys in prison. They would go to the prison, parole a guy, move him out of the community that sent him to jail in the first place. If you send a guy back to the same place that sent him to jail, he’s going back to jail. He’s got the same friends, doing the same thing—nothing has happened, but he’s missed three years. On top of that, they created jobs, so you could be independent: You could sell bean pies, you can sell fruit, you can sell newspapers, you could sell clothing. They had their own shops and stuff; I was very, very much impressed.

An article from 2009, reporting on a meeting of some American billionaires, all of whom agreed that there are too many people on Earth. “Who knows what schemes are going on to get that reduction? I do know there is a God, who has set a limit, and when the time comes, will move and save His people.” —Pastor Robert Smith

Haiti has been sanctioned, blockaded, isolated, for almost 200 years—my God! The only reason Haiti has suffered like it has, is because no man is an island, and no half of an island can stand. Everything has been done against them, to put them to where they are now.

So, to isolate and declare sanctions, against Syria, Yemen, anybody, is to starve them to death. It’s to seek to destroy them.

And it may be a part of the grand scheme of things. Ted Turner said some years ago that the world population needs to be reduced to 250 million so we can have enough oxygen for everybody. And who knows what kind of schemes are going on to get that reduction, and to reduce the population of India, reduce the populations in South America, and even here, in the urban United States.

God Is on the Side of the Poor

I do know this: I do know this: There is a God, no matter what you call Him, no matter how you approach Him, whether as a Hindu, or a Muslim, or a Christian. God has a time limit set. And when that time comes, God will move and save His people, because God is always on the side of the poor.