This editorial appears in the May 21, 2021 issue of Executive Intelligence Review.

Report on Mozambique Pilot Aid Project—
Toward a World-Scale Mobilization

Dr. Khadijah Lang is the Chair of the National Medical Association’s Council on International Affairs, and is the President of the Golden State Medical Association. Marcia Baker is an Editorial Board member of Executive Intelligence Review. They delivered these remarks to the second panel, “The Method of the Coincidence of Opposites: Only a United Worldwide Health Effort, Without Sanctions, Can Reverse a Worldwide Pandemic,” of the May 8, 2021 Schiller Institute conference, “The Moral Collapse of the Trans-Atlantic World Cries Out for a New Paradigm.”

Dr. Khadijah Lang: I am Dr. Khadijah Lang, the President of the Golden State Medical Association, and the Chair of the National Medical Association’s Council on International Affairs. Our organizations have been going to the East African country of Mozambique since 2017, providing medical missions in an effort to mitigate the healthcare disparities that are abundant and overwhelming in that country, and in many other parts of the world here.

We started out by bringing medical supplies and delivering them to a government hospital for the poor outside of the capital city. Subsequently, we came on missions bringing physicians to do surgeries and operate on patients who would not have been able to be treated in their country prior to our coming. We focussed with our medical missions on professional development, to train the physicians that were going to be staying there and working when we were gone, and thus make a more sustainable mission with what little time we had, to be able to donate and go over there and work.

We also partnered with Alpha Kappa Alpha Sorority, Inc., and were able to provide shoes, eyeglasses, and clothing for people in that country. The eyeglasses we brought were over 400 pairs of prescription eyeglasses. And through another affiliation and partnership with the Lions Club International and Alpha Kappa Alpha Sorority, we were able to turn the glasses over to an ophthalmologist from the Lions Club in Mozambique who was then able to distribute those glasses to the appropriate patients based on what their eye strength or weaknesses were, so that the glasses were fully used.

Unfortunately, there were certain changes in the climate and the environment. When we started out, the main need that we were attempting to address was healthcare disparities and inequities. Over the years, we have watched as locust plagues have come through and devastated the crops, creating famine in multiple areas of the country. And unfortunately, those locust plagues were followed up by cyclones; some of the worst cyclones they’ve seen in recorded history there. They came through and flooded, just inundated entire villages. Due to the devastation that had already been done by the locust plagues preceding that, this creates a situation that increases illnesses, increases malaria, increases cholera. These diseases on top of people who are famished and near starvation, only create a pandemic of a size that one cannot imagine. 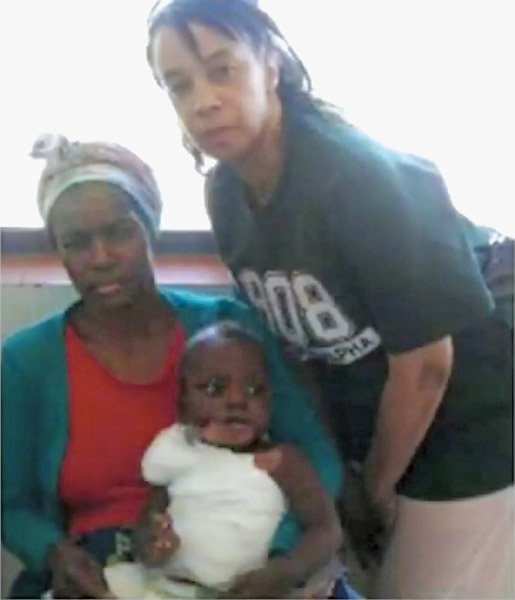 Courtesy of Khadijah Lang
Since 2017, Dr. Lang has led a mobilization to partner with organizations, including the Alpha Kappa Alpha Sorority and the Lions Club International, to deliver medical treatment, training of doctors, clothing, and eye glasses to Mozambique.

Unfortunately, that wasn’t enough, and COVID came along. The COVID brought a different type of problem to the country. Not only did it bring more financial and economic devastation because of the need to lock everything down; it caused it to be more difficult for people to be able to get out and get food. If you have a lockdown, there’s no way to get food. So, all of these different events, one on top of the other, have made life in Mozambique extremely difficult.

This is something that as a group, we can do a big deal to change. There is an African proverb that says, “If you want to go somewhere quickly, go alone. But if you want to go far, go in a group.” This is why Golden State has joined with the Schiller Institute and Committee for the Coincidence of Opposites. Because together, with all of us pitching in, we bring more to the table.

While we will continue as a medical organization to try to improve the medical and healthcare conditions for people there, and bring medical supplies there, if we medically treat a person who is starving, we’re not going to have much of a result. By partnering with our friends, the farmers, by bringing agricultural information and assistance to these areas that have been so devastated, and then bringing food [with] the assistance of the farmers, so that we can feed the people there, we’re going to have a much greater impact. We can show the world what can be done when people come together and work together for the cause of humanity.

34 Million Could Die This Year

Marcia Baker: Thank you, Dr. Lang. I’m very glad of the opportunity to work with you and the many others on the Committee for the Coincidence of Opposites on this combined project involving agriculture, medicine, water, seeds for the future. But what I’ll address is, how do we scale up to the large-scale response we need in Africa and around the world with this pandemic and the famine combined?

FIGURE 1
Numbers of People in Food Crisis or Worse (IPC/CH Phase 3 or Above),
by Region, 2021
View full size 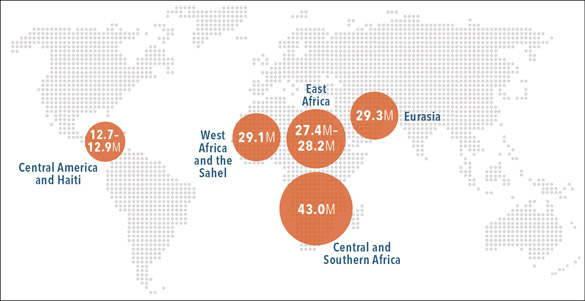 The map [Figure 1] shows the location of the worst-off of some 270 million people in the world who do not have sufficient food. This focusses on about 40 countries. In those countries, there are over 140 million people who are in extreme need of food to the point of famine. One can see in Africa—where Mozambique is in southern Africa—you have 43 million people in this situation. East Africa—28 million; West Africa and the Sahel—another 20-some million. Then look at Southwest Asia, where you have over 20-some million with the situation in Syria, Yemen, and Afghanistan. And in the Americas, you have 13 million. So, all together, it has been said that the danger, if we don’t have large-scale response with relief and food, 34 million people could die in the coming months ahead. 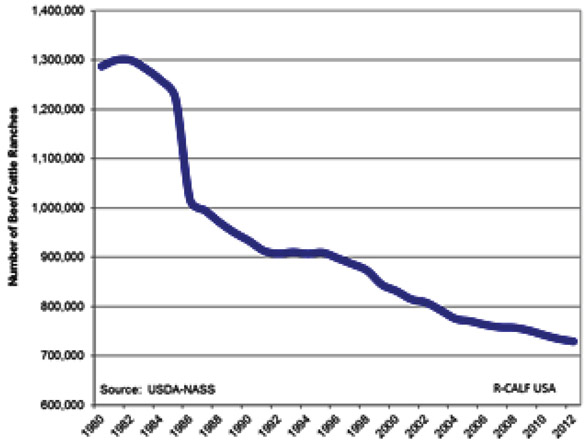 Now, look at the farmers’ side of this situation. Picture in your own mind the world’s most productive, high-yield farming areas in the United States, France, Germany, from Canada down to Australia, Argentina. Farmers are being squeezed to the point that independent family farmers are going out of operation all together. So, there’s been low prices—even if they’re high now—and there’s been other kinds of acute problems of dictates of how they should farm.

So, what are we left with? We’re left with billionaire overlords like Bill Gates in the United States [who] is the biggest farmland owner in the country. Now, we have a graph that just typifies the decline in numbers of farmers. In this case, it shows the decline in number of cattle ranchers in the United States over the 30 years from 1980 to 2012. So we went from over 1.5 million down to maybe 700,000 or less. It’s the same with dairy farmers, and it’s the same in other parts of the world. So, what can we do?

Dr. Lang described this joint effort and this spirit in Mozambique. What we have to do is mobilize food relief wherever we can to keep people alive, and end the malnutrition. Secondly, we need to prevent any more losses of farm production output. We have tried and true measures. We should have floor prices—you could call them parity prices—on what farmers produce. We should look forward to expanding production; the world needs it. Backing young farmers to get started. Ending the domination by a few transnationals internationally that control food and have enforced under-development in Africa. And third, we need infrastructure like crazy for the water and the power, and the hospitals, the research, and transportation.

We Need a TVA Approach

So this is what we need. But I have to stress, what is standing in the way here, you see here in a new document that was released in the last week in Brussels by the European Commission, that says we should have “carbon farming,” not food farming. This is really crazy. It’s part of a Green agenda that says farmers should cut back on their inputs. They should use 30% less land by 2030 for anything having to do with human needs—minerals or food. They should use less fertilizer. When it comes to carbon farming, that’s a crazy thing. What it means is, the farmer gets an offer to get a few bucks by selling what’s called carbon credits from CO2 captured in his soil so that big-name Wall Street companies can then speculate on it and create a Green bubble. It sounds like science fiction, and it is crazy.

So, this calls for producing less food in the world when we need more. This kind of thing has to stop. So, when we ask for emergency relief measures, what we’re doing—in Mozambique or elsewhere—is creating the momentum for development. For the infrastructure, for the technology, that we need to change this situation.

Now if you look at Mozambique and southern Africa, look at the opportunity. There are famous rivers that go through Mozambique to the ocean there—the Zambezi, the Limpopo, and others you may not have heard of. We need a Tennessee Valley approach, a TVA authority approach to develop that. The same with the cyclones and hurricanes that Dr. Lang talked about. The coast of Mozambique is beautiful, but it’s defenseless. Engineers know how to put in sea gates and levees and the other things that we haven’t done.

The point is, when we scale up our morality to work together, and to figure out how to produce more and get it to where it’s needed, then we can mobilize to meet all the needs between now and the future. I think this is a special call to youth, and this is the meaning of the Mozambique initiative.