Do Not Forget: The Global Concentration Camp Oven
Is Now Nuclear

Luis Vásquez is an organizer with the Schiller Institute in Peru. He delivered these remarks to the second panel, “The Method of the Coincidence of Opposites: Only a United Worldwide Health Effort, Without Sanctions, Can Reverse a Worldwide Pandemic,” of the May 8, 2021 Schiller Institute conference, “The Moral Collapse of the Trans-Atlantic World Cries Out for a New Paradigm.” 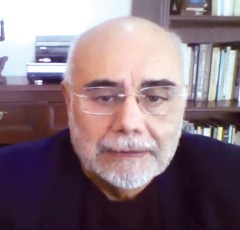 I’m Luis Vásquez, a follower of Lyndon LaRouche for over 45 years. I live in Peru, and I would like to thank the Schiller Institute for having invited me to say some things which are very important for understanding the current situation. And you will forgive me for beginning by talking about my case, because it is relevant to uncovering a reality which not everyone sees. In fact, it wasn’t even clear to me, let alone for the world population.

Six weeks ago, my wife and I came down with COVID, in a country like Peru which holds a world record of cases per million inhabitants. Where, because of neo-liberal economic policies, of that savage capitalism which only conceives of profit in the form of money, the economy has been destroyed. And therefore there are no services: no education, no transportation, and there are no health services. And in that situation, for people like us who are of a certain age, getting sick with COVID means pretty much a death sentence.

I got sick, we got sick, and we went to a private hospital to request ICU beds where we could get oxygen. There weren’t any ICU beds available in all of Lima. Every ICU bed had a waiting list of 200 or 300 people. There just weren’t any. We had to set up ICU beds in our house. With the help of our family, thanks to my children, they were able to do all the logistical work needed to keep us alive with oxygen during those terrible weeks of having severe COVID-19 pneumonia, which is what we had.

As you will understand, clearly not everyone can do that. People wait in line to fill their oxygen cylinders in order to save their relatives. A cylinder now costs $1,000. Refilling them with 10 cubic meters of oxygen costs $200. Not everyone can pay that; not even a tiny percentage of the population can do it; the rest die.

If you don’t think this is global, you are mistaken. And precisely because of that mistake, we may perish as a species. The fact is that we have a situation which doesn’t only involve one region. It involves the whole world social system in general, the whole political power system. We have reached this situation precisely because wrong decisions were made, driven by usury from 1970 forward, which has destroyed all of the processes which, with all their faults, were leading to some results in terms of development worldwide.

Now the world economy, as you know, is a casino at the edge of bankruptcy. It not only doesn’t allow for health solutions, as we have seen, but it is unfortunately going to mean the beginning of a situation where the Horsemen of the Apocalypse are unleashed: War, following the Plague; the Famine which is coming, will ultimately mean the triumph of Death.

New strains are being produced. I was hit by the Brazilian strain: very deadly, with a very high fatality rate and very contagious—far greater than the first variant. And new strains are coming. It’s likely that new variants, new mutations, new strains will appear, including regionally. Which is why we have to fix the decentralized vaccine R&D system.

Here in South America, for example, we have to have a research center for new vaccines that will attack the strains that may appear in this area. The same holds for India, and everywhere. This is going to mean real scientific transfers, if we are to save the population.

But why should we do that? Why should we fight that way? This is not a matter that is merely in our interest, of the poor countries, the poor Africans who are dying, the Indians, and so on. It is also in the interest of the rich countries, of the populations that don’t believe that they are in the concentration camp. Because, as LaRouche has rightly said, if we take the biosphere, and we add to that what he called the noösphere, which is the domain of human presence, it is one. With modern transportation routes, new forms of transporting goods and people, this process has accelerated. There are no barriers; the world is one. And since the concentration camp is global, the war also must be global.

The issue of morality, the issue of sharing the suffering of every human being, whatever his color, is not only a moral matter. Or the idea of, shall we say, “Okay, that’s good, maybe we will get to heaven,” or things of that sort. That too, certainly. But fundamentally it is a matter of science, it is scientifically true. The U.S., Europe and the advanced countries have to understand that the war must be won in the countries of the periphery. They have to defeat this plague in India, in South America, in Brazil, in Peru, and everywhere, if they wish to defend themselves.