They Knew or Should Have Known:
The Cases of Venezuela and Chile

Antonio Sánchez is a Venezuelan LaRouche movement organizer with the Schiller Institute. He delivered these remarks to the second panel, “The Method of the Coincidence of Opposites: Only a United Worldwide Health Effort, Without Sanctions, Can Reverse a Worldwide Pandemic,” of the May 8, 2021 Schiller Institute conference, “The Moral Collapse of the Trans-Atlantic World Cries Out for a New Paradigm.”

And if we are going to sanction PDVSA [Venezuela’s state oil company], which affects its very limited capacity to do oil business, it will have an impact on the entire people, the ordinary citizen of the communities of Venezuela. But the counterargument at this moment is that they already suffer so much from lack of food, lack of security, lack of medicine, lack of public health, that at this moment perhaps the best resolution would be to accelerate the collapse, even if it produces a period of greater suffering for a period of months or perhaps years. 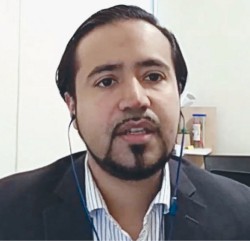 Good morning or good afternoon. My name is Antonio Sánchez. I’m a member of the Schiller Institute; I’m Venezuelan and I live in Chile.

The words that I just read to you are a statement made by the former United States Ambassador to Venezuela, William Brownfield, to Voice of America on October 12, 2018.

Venezuela is a country that until recently had an economy that was 95% dependent—95% of its income came from oil exports. The Venezuelan economy has been sanctioned; PDVSA, the state oil company, has been prevented from accessing financial markets in dollars, the sale of oil in dollars has been prevented, and Venezuela’s assets have been frozen, both those of PDVSA and the assets of the Central Bank abroad. This has been carried out primarily by the United States government, but also by the governments of other countries such as the United Kingdom, Portugal, Canada, and others. 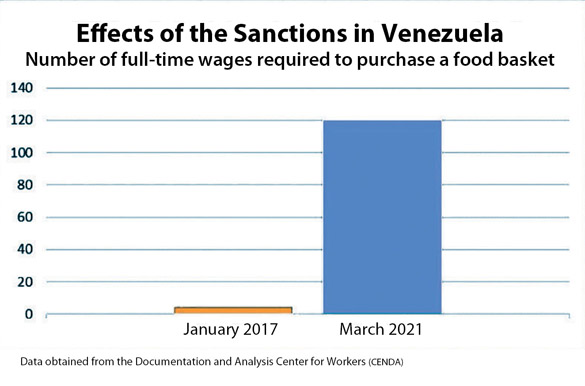 I want to briefly show you how this has impacted the Venezuelan economy. Figure 1 shows the number of minimum wages needed to cover the basic food items for a family made up of 3 children and 2 adults. In January 2017, approximately 5 minimum wages were needed to cover that market basket. Four years later, in March 2021, you can see that about 120 minimum wages were needed. The main reason for this is that the government has had to carry out successive forced devaluations of the currency. In December 2019, one dollar was worth approximately 55,000 bolivars; less than a year and a half later, in May 2021, one dollar was worth approximately 2.8 million bolivars.

The situation in Venezuela has been studied by human rights experts, by UN special rapporteurs and others, and they have requested the lifting of the sanctions that the United States, the United Kingdom, Portugal, Canada and other countries have imposed on the Venezuelan economy. The World Food Program carried out a study of the food situation in Venezuela in 2019. They determined that 32% of the population [of 28.4 million] suffered from food insecurity, that is, they needed help to be able to feed themselves. And of these people, 2.3 million were in a category described as “severe food insecurity.”

The good news is that the World Food Program signed an agreement with the Venezuelan State, and on May 1, the Executive Director of the World Food Program, David Beasley, announced that this agreement was already operational, and that it aims to deliver food to 185,000 school children by the end of this year, and increase to reach 1.5 million students by the end of the 2022-2023 school year.

Another situation that I want to draw your attention to is that of Chile. Chile is a country that has always been presented to us as the development model for our countries. However, the reality that I have been able to see personally has been totally different. In October 2019, a process of citizen protests began in Chile that demanded, among other things, better access to university education, better access to public health, better wages, and fair retirement pensions.

I was checking the website of the National Institute of Statistics of Chile and I found that in the third quarter of 2019, that is, immediately before the protests began, if we add the official unemployment rate in Chile, plus the percentage of people who have involuntary temporary jobs (that is, they don’t work full time), plus the percentage of people who work in the informal sector, it turns out that 45.7% of the labor force in that period did not have a secure job, a stable job and a productive job.

Regarding the handling of the pandemic in Chile, I want to draw your attention to the health care situation. While it is true that Chile is one of the countries that has most quickly carried out vaccinations, it is also true that, out of a population of approximately 19.6 million people, Chile only has 4,538 ICU beds for COVID patients, and as of May 2, 2021, only 252 of those beds were available. In other words, despite the advances in the vaccination campaign in Chile, there is a 94.4% occupancy rate of ICU beds.

I wanted to give you an overview of how sanctions affect countries like Venezuela and others that may also be sanctioned, and also show you how decades of applying neoliberal economic policies impacts our Latin American countries. But to solve this, just as the situation is serious, it also requires higher-level measures, higher-level programs and extensive cooperation, in order to establish suitable health systems in each nation, with the necessary infrastructure of energy, electricity and water to make these health systems sustainable.

Thank you very much for listening to me, and I hope I have managed to show you the panorama and the serious situation that we are experiencing in Latin America. Thank you.