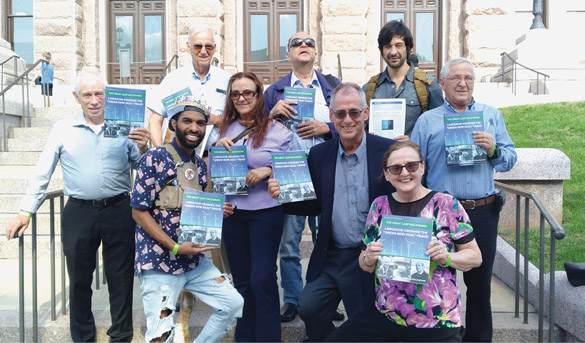 A delegation of concerned citizens joined with LaRouche movement organizers on May 20 to organize their state representatives, at the State Capitol Building in Austin, Texas.

May 22—The LaRouche movement brought its battle against the deadly “green finance agenda” to the Texas State Capitol in Austin on May 20, in the movement’s first major such intervention since the outbreak of the COVID pandemic. We had deployed a smaller group to Austin in early spring, when memory of the disastrous February freeze was still fresh. Late May is “crunch time,” when the Senators and Reps keep late hours on the House and Senate floors, pushing through or discarding piles of legislation before the Memorial Day adjournment. “No matter,” we insisted. “You must read our material, and act on it now.”

To each office, we presented the LaRouche Organization’s pamphlet, The Great Leap Backward: LaRouche Crushes the Green New Deal Fraud. We also delivered a model resolution, directed to President Biden and the Congress, “On Rejecting the Green Finance Assault on Industrial Civilization.” Quoting chapter and verse from the Davos agenda and President Biden’s executive orders, the resolution documents the intention of the green financiers to loot industries, starve nations, and reduce world population.

Therefore, be it resolved that the State of Texas rejects the anti-human green finance agenda as embodied in the Paris Agreement, the Davos Forum’s Malthusian ‘race to zero’ diktats, and the November 2021 UN COP-26 Glasgow Climate Summit....

Be it further resolved that the United States should act to foster the development of health, advanced energy and infrastructure platforms to overcome poverty, unemployment and disease, to enable the future progress and growth of people in Texas, the U.S., and the world.

Malthusianism had been the central focus of a local Zoom chat we had organized the previous Tuesday, with seven activists participating. Independent Senate candidate from New York, Diane Sare, quoted from Parson Thomas Malthus’ bogus economic theories by which the British East India Company justified its immiseration and reduction of subject populations. Following Diane, a famed meteorologist, who for 20 years delivered nightly weather forecasts to TV viewers, offered words of encouragement and support. He admitted that, early on, the “authorities” had swayed him with their arguments about CO2 and global warming. “Then I looked into the matter more closely,” he said. ”Now I’m convinced they’re pushing this fraud to bring in a one world government.”

A Debate of Organizing Method

There were nine in our delegation, including three supporters who were stepping up to organize for the first time. These included the leader of a Liberty group south of Austin; a flamboyant and enthusiastic young man, recently met, who took a day off from his job at a pizza joint to make the trip; and a real estate developer who lodged us all in his home north of Austin the night before our excursion to the Capitol.

There was some discussion Thursday morning as to whether the legislators and their staffs could really grasp “Malthusianism.” “You have to stick to topics they’ll understand,” was one argument. “Shouldn’t we discuss legislation that’s already on the calendar?”

As it turned out, it was our abrasive declamations of the murderous Malthusian intention behind the Great Green Reset that “stuck” more than anything else.

We visited the office of a Republican representative who is also a neurosurgeon. After working through the Resolution, we called attention to the recent Lancet [British medical journal—ed.] article (printed on the back of the resolution), which demands reduction of surgery and advanced healthcare delivery, because of its extravagant carbon footprint. A young aide reacted with shock and confusion: “What? They want to halt operations? Anesthesia? I don’t get it! Why? Why?” Our activist replied, “This is Malthusianism—they want to reduce the population.” We placed in the aide’s hands the Schiller Institute’s call for a modern healthcare platform in every nation, to fight pandemics.

In one office the Representative came from the back room to berate those members of our group who had neglected to don their masks before entering. After directing his colleagues to mask up, our group’s leader remarked, “You know, we have a problem. Have you heard of the Lancet?” ”Of course I have!” “Well, the Lancet says we should stop providing advanced care, even in this pandemic, because of ... climate change!” For a moment, the legislator was truly nonplussed. ”May I see that? ... I don’t think there’s enough time in the calendar to place a resolution on the agenda.”

We produced and distributed one hundred copies of a speech by former Governor of the Bank of England Mark Carney, who was later advanced to become the United Nations Special Envoy for Climate Action and Finance. In his remarks, Carney haughtily admonishes the nations of Africa to cancel all carbon-based development of the physical economy, and to instead invest their “carbon credits” in the bonanza of green finance—in London, of course. (See article on Carney in this issue.) We delivered this to the office of a Republican on the Energy Committee. One activist elaborated the sinister role of Prince Charles at the Davos summit. The aide was polite, but unruffled. Then another activist pointed to a poster of the World Wildlife Fund on the office wall. “Do you know who that [WWF] is? Prince Philip and Prince Bernhard, both Nazi lovers, founded the WWF as a Malthusian and environmentalist group, to kill Africans”: The aide exclaimed, “They did?”

The chief aide to a black urban Democratic legislator pressed for more and more details about “green finance.” “Tell me how it works!” When we described Carney’s demand to suppress African industrialization, and simply market its carbon credits to the rich, he said. “This is new to me. I’ll pass it on to the boss.”

An Idea of Malthusian ‘Zeus’

In the offices of the farm- and ranch-connected legislators, we called attention to the “30 by 30” clause of Biden’s executive order, E.O. 14008. Most were only vaguely aware of the mandate to have 30% of U.S. farmland out of cultivation by 2030. “No one is voting on this,” we stressed. “Biden is pushing this through by executive decree. You have to fight this thing!”

Another team discovered that several of the younger aides had already read the Great Leap Backward pamphlet, after receiving it from us in early April. Two aides to one legislator had worked through the pamphlet together. We focused many conversations on the need to develop a world platform for adequate healthcare, public health and living standards. This requires trashing green finance. Many of these younger aides still have ideals, and opened up in the course of conversation. One who exclaimed, “I really love this kind of discussion—I wish I had the time to keep up on these things,” was directed to start watching Harley Schlanger’s webcasts for The LaRouche Organization. There was a grand discourse with a young aide who loves the Greek Classics, recalled the Prometheus myth, and grasped our likening of the British royal Windsors to the tyrannical Zeus.

A fourth squad, which included a retired guidance systems engineer, found several young aides who had read the report. The older hands in the Senate offices were more often dismissive. The retired engineer referenced Texas Senate Bill 3, which cuts state subsidies for renewables, as an entry point to discuss LaRouche’s larger historical fight against the green agenda.

At the end of the day, we had briefed over a hundred people and delivered literature to almost every office. Although the Texas legislature adjourns after Memorial Day, the offices will be staffed throughout the summer. Given developments in the world, the lawmakers may well return for an emergency session before autumn.

When they are ready seriously to fight the menace of green finance, we can provide them direction and ideas to strike the Malthusian beast at its head—the financial oligarchy of the British Empire.