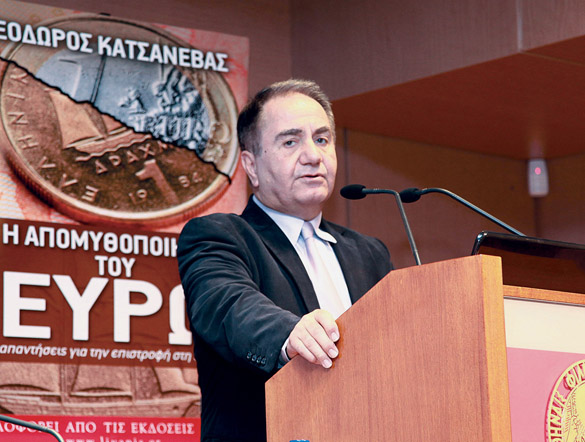 Born in Athens in 1947, Katsanevas was a freedom fighter from his days as a student in activities against the military junta that ruled Greece, when he joined the Democratic Committees of Resistance (Δημοκρατικες Επιτροπες Αντιστασης) in 1967, one of the first anti-Junta student movements. After leaving Greece to study in Great Britain, he joined the Panhellenic Liberation Movement, another anti-junta organization founded by Andreas Papandreou, who later would become Prime Minister of the restored Hellenic Republic.

After the overthrow of the Junta in 1974, and finishing his studies at the University of Piraeus, receiving his master’s degree at the University of Warwick in Britain, and a doctorate at the London School of Economics with a PhD in Labor Economics, he entered the political arena. He became one of the historic founders of the Panhellenic Socialist Movement, the party founded and led by Andreas Papandreou, playing a leading role in that party’s reform program. He served in leading positions in national manpower and employment organizations, and later the state welfare agency. Katsanevas was a Member of Parliament from 1989 to 2004, after which he returned to the University of Piraeus as a Professor of labor economics.

The financial crisis of 2010 and the government’s failure to fight against the European Union’s policy, brought Katsanevas back into the political arena. In May 2013 he founded the Drachma Party, which called for Greece to withdraw from the Eurozone and re-establish the drachma as the county’s currency, in order to win back its sovereignty over economic policy.

It was in 2012 when Theodore Katsanevas came into contact with the Schiller Institute, and in November of that year he addressed the Schiller Institute Conference in Germany via video hook up, telling the conference how the EU, the European Central Bank, and the International Monetary Fund had crushed the Greek economy under the weight of nearly 200 billion euros in “bailout loans,” accompanied by brutal austerity that had reduced Greece’s economy by 35% and increased unemployment to over 30%, creating a crisis such as had not existed since the time of the Nazi occupation.

In April 2013 he came to Germany to address another Schiller Institute conference where he presented his Plan B for Greece, which would become the program of the Drachma Party founded in May the same year. The plan called for writing off 50-70% of the debt, with a grace period of two years before starting payments. Greece would withdraw from the Eurozone and reintroduce the drachma, which would be deflated to a reasonable rate linked with a basket of currencies. That program also introduced key elements of LaRouche’s Four Laws, including Glass Steagall bank separation, capital controls, investments in the productive sector, high technology, and public spending channeled into modernization of health care and protection of the poor with welfare programs.

The party contested the European elections but unfortunately did not pass the 3% margin necessary to enter the European parliament; nonetheless he continued his political activities and fight for regaining Greece’s economic sovereignty, presenting this fight to a Schiller conference in 2015.

Although he was born and raised in Athens, the Katsanevas family has its origins in Crete. The island is not only home to the very ancient Minoan civilization, but has produced many famous political and cultural leaders, many of whom Theodore Katsanevas strongly identified with. His father was a fighter pilot in the Royal Hellenic Air Force during World War II and gained a reputation for his courage. Politically, his father was identified with the movement associated with the great Greek republican anti-monarchist statesman, Eleftherios Venizelos, who founded the Liberal Party and served 8 terms as Prime Minister. The pro-Venizelos military officers, including the elder Katsanevas, found their military careers cut short once the right wing pro-monarchist parties consolidated their power after World War II.

Crete is also the origin of some of the greatest of Greece’s poets, authors, and composers, including the greatest Greek author of the first half of the 20th century, Nikos Kazantzakis, and the famous composers Mikis Theodorakis and Manos Hadjidakis. Theodore Katsanevas greatly appreciated all of them, especially the composers and was himself an amateur guitarist and composer in the Greek folk music tradition. He had set poems by such well-known Greek poets and authors as Kostas Varnalis and Maria Iordanidou, and he posted several videos of his private performances from his living room on YouTube. On September 9, 2020, he posted one such video in which he sings Athanasia or immortality, composed by Manos Hadjidakis with lyrics by the famous Greek poet Nikos Gatsos. It can be heard here, with English translation here. This is one of the most popular songs in Greece and it can be heard in taverns, night clubs and in concert halls performed by Greece’s most famous opera singers.

Theodore was a fighter and an optimist to the end: In his last public message posted on his Facebook page prior to entering the hospital, he wrote:

I am optimistic, and I recommend this to everyone, with the urge for everyone to get the vaccine and the tests. Any minimal side effects from vaccines are incomparably minimal compared to the risks of [the] Covid plague. And I say, traditionally anti-systemic, because I do not think there are any dark forces behind the pandemic, regardless of the fact that some multinational companies are getting rich. This is the least necessary evil, at a time when our country suffers from many mainly economic plagues in many ways. That is where our main problem lies, as in national issues and immigration, and that is where we need to focus our attention and our national vigilance.

Beyond all this, we must strive for the best and smile in the future, in the hope that this smile, one way or another, can come back to us.