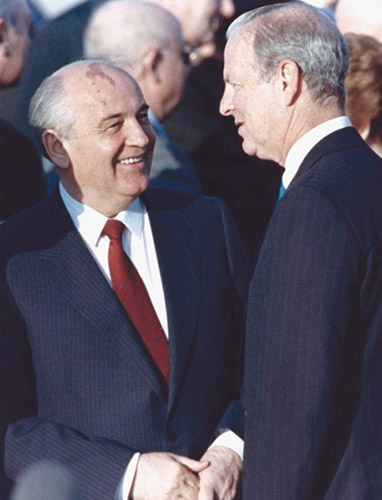 June 4—The Royal Institute of International Affairs (RIIA), also known as Chatham House, has recently attempted to seize control of the narrative of “Russia the aggressor state” ahead of the June 14 NATO summit, backing up a speech on Russia as “always the aggressor” by NATO Secretary General Jens Stoltenberg in preparation for that summit. Chatham House has resorted to the most blatant lies to do so, and has seen them refuted.

On May 13, the British royal think-tank issued a major report, “Myths and Misconceptions in the Debate on Russia: How They Affect Western Policy, and What Can Be Done,” which, it claims, “deconstructs 16 of the most prevalent myths and misconceptions that shape contemporary Western thinking on Russia.” The “myth” that has garnered the most attention is its “Myth No. 3,” which concerns whether or not Soviet leader Mikhail Gorbachev was promised that NATO would not expand eastwards toward Russia following the fall of the Berlin Wall in November 1989.

Declared John Lough, Chatham House Fellow, at the outset of that section:

Contrary to the betrayal narrative cultivated by Russia today, the U.S.S.R. was never offered a formal guarantee on the limits of NATO expansion post-1990. Moscow merely distorts history to help preserve an anti-Western consensus at home.

Lough claimed that U.S. Secretary of State James Baker promised Gorbachev in July 1990 that NATO would not expand eastwards past Germany, but that Washington then backed away from that promise as “impractical” because of U.S. troops stationed in Germany. Lough also claimed that Gorbachev never raised the matter of NATO expansion during 1990 because both the Soviet Union and the Warsaw Pact still existed, meaning that no one was even contemplating the possibility of Soviet-bloc countries eventually joining NATO.

Lough attempted to pile on with an assertion that the 1999 NATO bombing campaign against Serbia did more to shape anti-Western attitudes in Russia, than did NATO expansion. According to his piece, it wasn’t until 1993, long after the Soviet Union had disappeared, that Moscow began expressing opposition to NATO expansion, “but accepted that it could not stop the process.”

The NATO matter apparently triggered a furious debate in social media, on twitter and by email, such that RFE/RL (Radio Free Europe/Radio Liberty) took note of it on May 19, 2021, quoting an article in the 2009 issue of Washington Quarterly by Mark Kramer, director of the Cold War Studies Project at Harvard University’s Davis Center, who reviewed the declassified transcripts and other materials:

At no point in the [1990] discussion did either Baker or Gorbachev bring up the question of the possible extension of NATO membership to other Warsaw Pact countries beyond Germany. Indeed, it never would have occurred to them to raise an issue that was not on the agenda anywhere, not in Washington, not in Moscow, and not in any other Warsaw Pact or NATO capital. 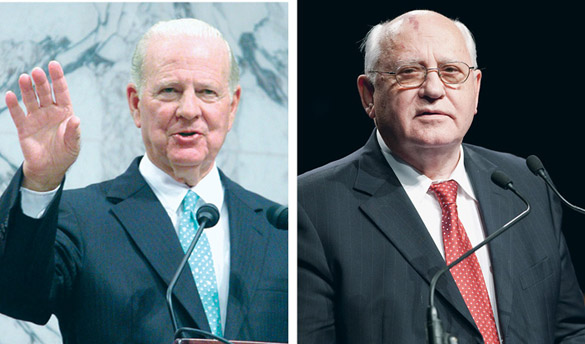 Left: EIRNS/Stuart Lewis; right: EU
In exchange for the Soviet Union allowing a peaceful reunification of Germany, James Baker (left) promised Gorbachev in July 1990 that NATO would not expand eastward beyond Germany. That promise has not been kept.

But, as Russia’s Sputnik News wrote in a report on May 30, the National Security Archive at George Washington University (NSArchive) in 2017 published a briefing book, NATO Expansion: What Gorbachev Heard, with 30 declassified documents showing that, indeed, NATO expansion was discussed from the earliest moment that German reunification became a distinct possibility. Moreover, Gorbachev was assured then that NATO would not expand eastwards—not only by Secretary of State Baker, but by European officials as well.

The NSArchive followed up in 2018 with a second briefing book, NATO Expansion: What Yeltsin Heard. NSArchive Director Tom Blanton and the Director of NSArchive’s Russia Programs, Dr. Svetlana Savranskaya, had noted in the first briefing book’s introduction that the documents were assembled for a November 10, 2017 panel discussion at the annual conference of the Association for Slavic, East European and Eurasian Studies (ASEEES) in Chicago under the title, “Who Promised What to Whom on NATO Expansion?” One of the speakers was the aforementioned Mark Kramer.

The existence of the briefing book immediately dismissed the idea that NATO expansion was not even thought of in early 1990. On January 31, 1990, German Foreign Minister Hans-Dietrich Genscher delivered a speech in Tutzing, Germany in which he laid out his ideas on German reunification. According to a U.S. Embassy cable on the speech, Genscher specified that a reunified Germany would remain part of the Western alliance: But at the same time, the unification process “must not lead to an ‘impairment of Soviet security interests’.” Therefore, Genscher continued, “NATO should rule out an ‘expansion of its territory towards the east; i.e., moving it closer to Soviet borders’.”

A week and a half after Genscher’s speech, Baker was in Moscow. He met with Soviet Foreign Minister Eduard Shevardnadze, and then with President Gorbachev on February 9. About half of the 9-page U.S. memorandum of conversation (MEMCON) of the discussion is redacted; but what is reported shows that Baker frankly admitted to Gorbachev that NATO is the mechanism for maintaining the U.S. military presence in Europe:

If you abolish NATO, there will be no more U.S. presence. We understand the need for assurances to the countries in the East. If we maintain a presence in Germany that is a part of NATO, there would be no extension of NATO’s jurisdiction for forces of NATO one inch to the east. 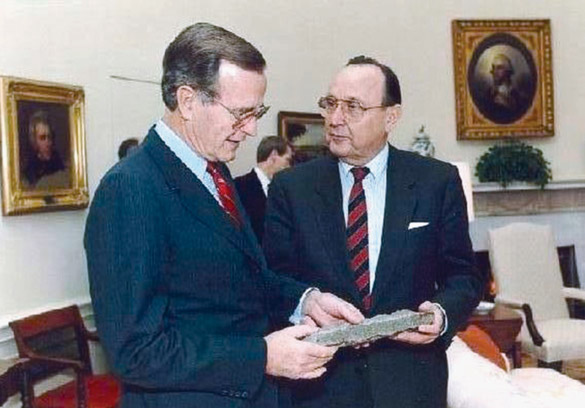 George Bush Presidential Library and Museum/NARA
German Foreign Minister Hans-Dietrich Genscher (right), in a speech of January 31, 1990: “NATO should rule out an ‘expansion of its territory towards the east, i.e., moving it closer to Soviet borders’.” Here, he presents President George H.W. Bush with a piece of the Berlin Wall, November 21, 1989.

Baker suggested that maybe there was a better way to deal with the external effects of German reunification but he didn’t know of one. “Basically, I share the course of your thinking,” Gorbachev said.

Baker later posed the same position as a question:

Ironically, Gorbachev’s reply is redacted in the U.S. transcript released to the NSArchive. But it was reported in the Russian transcript made available to researchers as early as 1996, the English translation of which was published in 2010. According to that Soviet account of the conversation, Gorbachev responded:

[W]e will think everything over. We intend to discuss all these questions in depth at the leadership level. It goes without saying that a broadening of the NATO zone is not acceptable.

We agree with that.

But while the State Department was going in the direction of assuring Moscow that NATO would not expand eastwards following German reunification, the Defense Department was moving in the opposite direction. In an October 25, 1990 memorandum, James Dobbins, then the Acting Assistant Secretary of State for Europe, wrote that the first topic for discussion in a strategy review paper on enhancing NATO’s political role, was whether or not NATO should accept East European members:

While we must not present NATO as a closed club, there is clearly no support for such membership now. OSD [the Office of the Secretary of Defense —ed.] wishes to leave the door ajar, with caveats such as no discussion at this time. State prefers simply to note that discussion of expanding membership is not on the agenda and need not be addressed in the NATO strategy review.

‘Narrative for a Future Confrontation’

So, what’s behind the Chatham House report? Why did it come out when it did? As Sputnik reported, the declassified documents show that discussions of NATO in the context of German unification weren’t limited to the status of East Germany’s territory. Western leaders discussed and rejected Central and Eastern European nations’ membership in NATO as of early 1990 and through 1991. Schiller Institute President Helga Zepp-LaRouche noted, during The LaRouche Organization Weekly Webcast on June 2, 2021 that the Chatham House lie could only serve one purpose: “To knit a narrative suitable for a future confrontation.”

is increasingly desperate to maintain control of the narrative and turn reality on its head to portray Moscow as somehow being the aggressor. When the media haven’t trivialized the importance of the documents, they have ignored the abundance of proof all together, by simply lying by omission and not reporting it. It is not by chance that virtually no major news outlets in the U.S. provided any coverage of the publication of documents from the National Security Archive.

The Chatham House and RFE/RL reports were published in the wake of NATO Secretary General Jens Stoltenberg’s “NATO 2030” proposal, the substance of which he intends to present to the NATO summit on June 14. Sputnik reported:

The document claims that “after the end of the Cold War, NATO attempted to build a meaningful partnership with Russia”; however, by the [NATO] alliance’s account of events, Russia resorted to “aggression” and started “routinely engag[ing] in intimidatory military operations in the immediate vicinity of NATO.”

The declassified documents published by NSArchive totally up-end that narrative of Russia as the aggressive power, as Parry notes. Concurrently, it raises the question as to how Russia’s military exercises within its own borders are now seen by the Alliance as “operations in the immediate vicinity of NATO.” 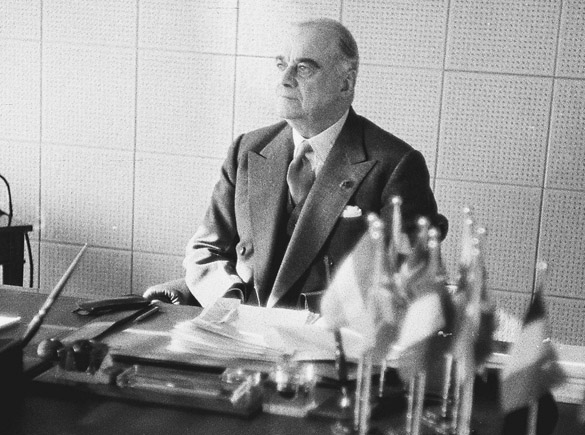 NIDS/NATO
Lord Hastings Ismay, NATO’s first Secretary General: The purpose of NATO was to “keep the Russians out, the Americans in, and the Germans down.”

NATO’s first Secretary General, Lord Ismay, is reported to have said that the purpose of NATO was “to keep the Russians out, the Americans in, and the Germans down.” More than 70 years later, the Chatham House report clearly indicates that the British intend to make sure that this remains the Alliance’s purpose. 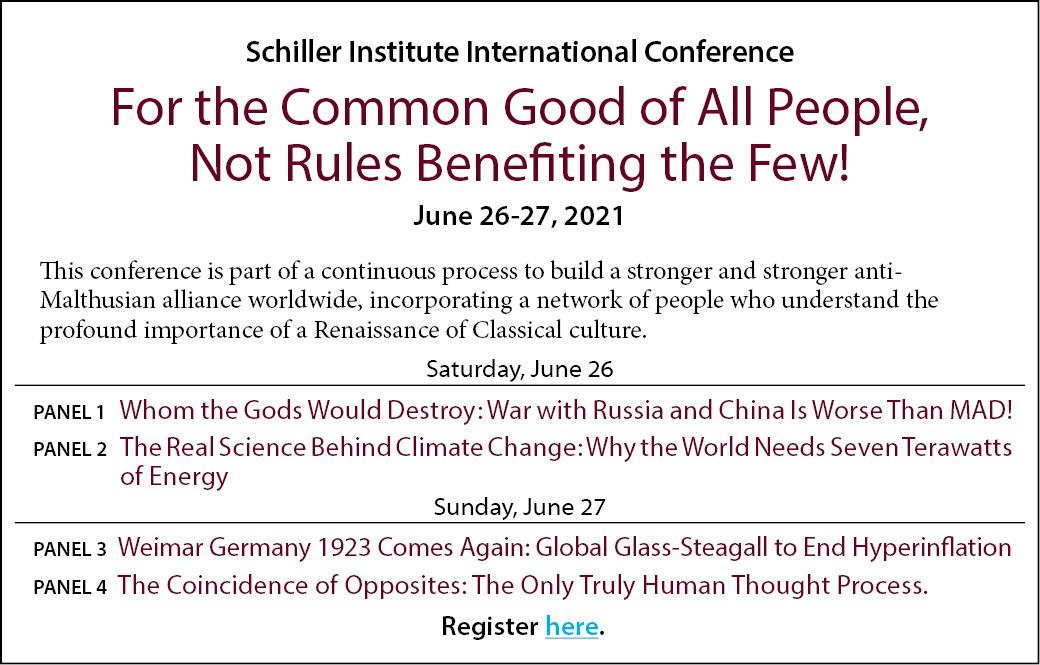