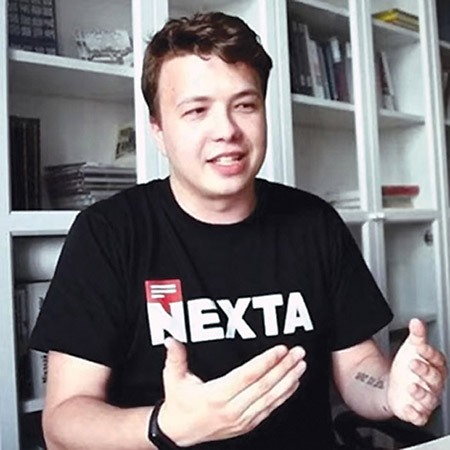 June 3—Did 26-year-old Belarus dissident Roman Protasevich’s career as a soldier in the neo-Nazi Azov Brigade in Ukraine harm his chances of employment by the British Foreign Office, or with the National Endowment for Democracy (NED), Carl Gershman’s regime-change institution? Absolutely not. In fact, he is being deployed directly by the British and their American assets.

The arrest of Protasevich in Minsk, Belarus on May 23 is a cause of great concern for the intelligence agencies of the West—but not for all the hype over the controversial landing of the Ryanair plane that led to his arrest. While there was, indeed, a bomb threat that caused it to land in Belarus, the stories that Russian intelligence or the Lukashenko government manufactured the bomb threat seem to stem from those same intelligence agencies that have controlled Protasevich’s young life.

Certainly no one in the West is supposed to evaluate, or even listen to, e.g., the recording of the Ryanair pilots telling the Minsk airport that it was their “recommendation” that they land at Minsk—a recording being aired publicly in Belarus. And the claim that four Russian “KGB” agents were on the flight tracking poor Protasevich, and that one or more of them staged an incident with the airline personnel, claiming that a bomb was on board, has fallen flat. That line originated with a posting on Protasevich’s NEXTA social media board—but it turns out that no such Russians were on board, and none of the passengers on board heard any such confrontation.

However, even if Lukashenko’s people had artificed the recording of the pilots, and had made up the bomb threat as a pretext to arrest Protasevich, there would still be more than a bit of hypocrisy in the “holier-than-thou” protests over the arrest of this so-called “democratic freedom fighter.” Often cited is the case of the forcing down of the official airplane of Bolivian President Evo Morales in 2013, a head of state with no criminal charges against him—neither of which can be claimed for Protasevich. In the 2013 incident, intelligence agencies were in a panic, thinking that Morales was transporting Edward Snowden, and therefore all things were fair for the West.

Beyond these controversies, an examination of the details of Protasevich’s activities provide an efficient pathway to throw some light on the work of Western intelligence agencies with the glories of “color revolutions,” regime changes, and the relentless march toward nuclear showdowns with Russia and/or China.

In a May 26 posting, “U.S.-Funded Belarusian Regime-Change Activist Arrested on Plane Joined Neo-Nazis in Ukraine, The GrayZone’s Assistant Editor Ben Norton provides some useful details on Protasevich, who began his activism as a teenager with the Young Front, a Belarusian nationalist group that trained in weapons, held rallies honoring World War II Nazi collaborators, and staged violent protests against the government of Alexander Lukashenko.

Facebook posts show Protasevich, during the winter of 2013/14, turning up in Ukraine for the Euromaidan protests in Kiev, which were openly promoted by the Obama Administration. It seems that he hooked up with the notoriously Nazi-worshipping Azov Brigade at this point. According to his 2015 interview with Radio Svaboda, shortly after the Euromaidan, he volunteered for the Azov Brigade, and fought as a soldier with them during at least 2014-15. Despite his recent efforts to claim that he was simply a journalist, it is hard to get around that he wore the Azov uniform and carried an assault weapon. He was wounded by shrapnel in the fighting near Shyrokyne and served in Mariupol in 2015. 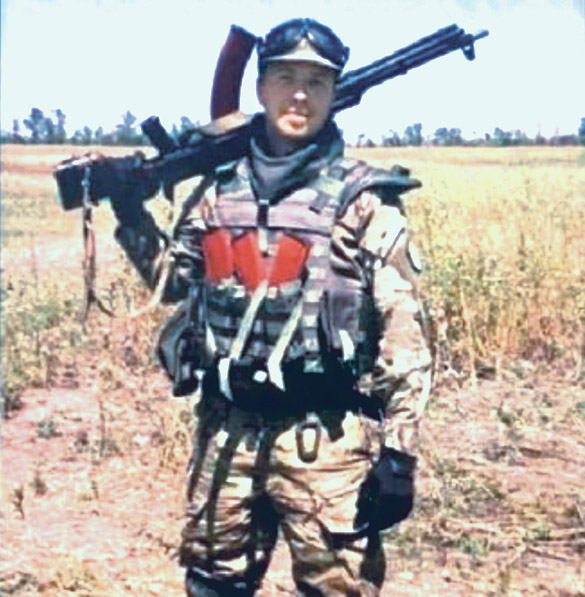 A fighter of the “Pahonia” detachment of the Azov Battalion with the call sign “Kim,” who has been alleged to be Roman Protasevich.
View full size 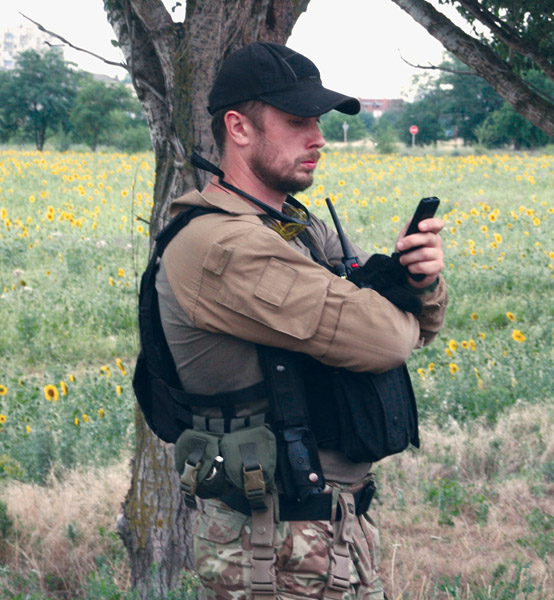 CC/Carl Ridderstråle
Andriy Biletsky, first commander of the Azov Battalion, on July 5, 2014. At the time he was leading units on a patrol near Mariupol, Ukraine.

The Prosecutor-General’s Office of the Luhansk People’s Republic, one of the two breakaway republics in Eastern Ukraine which have opposed the neo-Nazi coup in Kiev, has recently opened a criminal case against Protasevich, alleging his role in the bombardment of communities causing civilian casualties. However, they followed that with an announcement that they will first offer their assistance to the Belarusian authorities in their legal proceedings against Protasevich. A former leader of the Azov Brigade, Andriy Biletsky, has spoken up in defense of Protasevich, saying that, while he was with Azov, he fought with words, not weapons. (Biletsky is now a politician, openly calling upon Ukrainians to overthrow the Belarus government.) And Roman’s own mother is 100% sure that he only went to the Donbas as a journalist.

However, the various photos of Roman in full Azov gear with an automatic weapon, standing in the Azov’s military formation, and riding on a tank, suggest otherwise. It did not help his case that his Russian girlfriend, Irina Khalanskaya, posted some of the photos on the social media website, VKontakte. Finally, there is also a separate photo of him in a curious t-shirt featuring the neo-Nazi “Sva Stone.”

Finally, Protasevich’s own words, if accurately reported, are pretty convincing on their own. In his 2015 interview with Radio Svaboda (the Belarus language version of the U.S. Radio Liberty), he says that he decided to go to war because of “blood accounts with the Communists.” Further, “if we do not stop the Russian Putin horde now, then our country … may become the next.” Then he describes his initial firing of his weapon in combat: “I had only one thought in my head: ‘Either you or me.’ However, I do not regret anything.” This does not sound like a journalist simply taking pictures. He described the Azov Brigade as being “from the very first days … one of the most disciplined and tested,” and that they have “a strong ideological background” with “proven and numerous trainings.”

It is not clear how long Protasevich served at the front. At some point, he was also employed by America’s Radio Free Europe/Radio Liberty (RFE/RL). It is certainly possible that he wore both soldier and journalist hats simultaneously, as he was generating video and photographs from the Donbas. Protasevich was honored as a “Havel Fellow” of the RFE/RL, as was his Belarusian compatriot, Franak Viacorka. Viacorka became a top advisor to the West’s chosen candidate for replacing Lukashenko, Sviatlana Tsikhanouskaya—and Viacorka might well have been Protasevich’s first link to her operation.

Protasevich also picked up some earnings from an operation jointly funded by the United States, Poland, the Netherlands, and Lithuania, which was called the European Radio for Belarus. But then, in April 2018, he wrote: “The most important week in my life begins…. Never had so many important and interesting encounters in my life.”

The occasion was a week of meetings in Washington, DC. One photo has him at the U.S. State Department. It is known that he was received at the McCain Institute. (In December 2016, Sen. John McCain, who never saw a war he didn’t love, had visited the Donbas region, promising “lethal defensive weapons” for the neo-Nazi Azov Brigade and others fighting the insurgents.) In 2019, Protasevich then was promoted to become the editor-in-chief of the NEXTA messaging app, which maintains three channels on Telegram.

Of some note, Telegram is described by the Jamestown Foundation as having a “built-in blocking-bypass mechanism and additional proxy servers connected specifically for Belarus. According to Pavel Durov, the founder of Telegram, anti-censorship tools were enabled for Belarus. Durov is described as the “Mark Zuckerberg” of Russia, having created their version of Facebook, VKontakte. In 2013/14, he created Telegram, defended the Maidan operations, was pushed out of VKontakte, and left Russia. Telegram was set up out of Berlin, and then moved to Dubai. Otherwise, NEXTA is described by the British Foreign Office-backed Meduza, as “the most prominent opposition outlet” for use against Belarus. (Of note, Meduza, a Russian-language media outlet based in Riga, Latvia, is the primary British Foreign Office social media operation for color revolutions in Eastern Europe, as documented by Max Blumenthal in The GrayZone. On April 23, 2021, the Russian Ministry of Justice added Meduza to the registry of “foreign agents.”)

Protasevich proceeded to stir up support and provided coordination for the coup attempt in Belarus, all done from an office in Warsaw, Poland. This included inflammatory misinformation, such as falsely stating that the police had brutally beaten a protester to death. These activities with NEXTA have been at the center of the legal charges against him in Belarus, that up to now, have kept him from returning to Belarus.

According to Meduza, after the crackdown in Belarus against the demonstrations, Protasevich moved to Vilnius, Lithuania in September 2020. There he joined Telegram’s Belamova social-media operation, created by yet another of RFE/RL’s fellowship honorees, Ihar Losik. The pretender to the presidency in Belarus, Tsikhanouskaya, had taken up residence in Vilnius a few weeks before. Protasevich became Tsikhanouskaya’s official photographer for her trip to Athens in May, and it was on the flight back from that assignment that he was arrested. 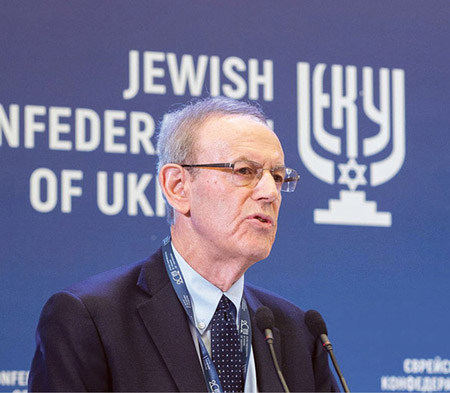 ‘The Epicenter of the Global Struggle’

The NED’s Carl Gershman is openly committed to regime-change in Russia and Belarus. Four days after Lithuanian Prime Minister Saulius Skvernelis received Tsikhanouskaya in his office and publicly referred to her as “the national leader of Belarus,” Gershman made a presentation to the Kalinowski Forum in Vilnius.

It was recounted the following day, in a September 25, 2020 “UkraineAlert” item for the Atlantic Council, titled “Belarus Reborn,” in which Gershman declared:

I am sure that all of us are awestruck at the sheer display of people power and the courage of the Belarusian people to defend their right to freely elect their leaders… an extraordinary, all-Belarusian, pro-democracy movement…. [O]ne thing is for sure…. Lukashenka [the spelling of his name in Belarus] and his cronies simply cannot go back to business as usual.… They must now concede defeat and exit the stage. Today’s Belarus is the epicenter of the global struggle for democracy.

Unfortunately for Gershman, about a week prior to Protasevich’s arrest, two Russian pranksters, Vovan and Lexus, caught him and his NED honchos on video. Gershman’s session with “Tsikhanouskaya” can be seen on YouTube. Normally, it is not easy to trace NED funds. As Gershman thought he was talking to Tsikhanouskaya, his unguarded comments caught him describing some of where his NED money was spent:

We support the journalists.… We support people if they have to flee the country, we support their temporary stay in other countries, and all the needs that they have.

Vovan and Lexus were provoked to actually have their fake Tsikhanouskaya make a tearful request for money for a better outfit, so her upcoming meeting with Secretary of State Antony Blinken would be successful. The NED folks explained that clothes did not fall under “all the needs they have.” That farce aside, there is no better ideal fit for Gershman’s description of a funded journalist than Roman Protasevich. His advancement after working for Radio Free Europe, and his week in Washington, D.C., fits Gershman’s operation to a tee. There is a solid cause for intelligence agencies to be alarmed over what the young man is telling the authorities in Belarus presently.

To answer the question posed at the beginning of this report: Actually, Protasevich’s neo-Nazi activities were much more likely to have been part of a career move, accelerating his advance “up the ladder” of the imperial, neo-con operations of the British Foreign Office and Gershman’s NED.