June 2--Relations between the European Union and China have been frozen, if not totally ruptured, since the imposition of sanctions by the European Union, the Biden Administration, the United Kingdom and Canada last March 22 over the phony issue of human rights violations in Xinjiang. This intervention in the internal affairs of China elicited a swift response from China with counter-sanctions imposed the same day. The rift with the EU widened on May 20 with the decision by the European Parliament to suspend the ratification of the EU-China “Comprehensive Agreement on Investments” (CAI), which would have been the most important EU-China agreement to date, and had considerable support within economic circles of Europe.

Nonetheless many European countries, including members of the EU, seeing the insanity of breaking relations with the world’s most dynamic and second-largest economy, are putting the interests of their countries above the geopolitical games and provocations of the trans-Atlantic anti-China forces. These countries are working to enhance their bilateral political and economic cooperation, especially in areas of trade infrastructure development, and integration into the Belt and Road Initiative. In addition, there are other platforms for cooperation including the China and Central and Eastern European Countries (CEEC)—also known as the “17+1” group[fn_1] of East European countries, some of whom are not members of the European Union. This is despite the attempt by Lithuania to sabotage this cooperation by exiting the group and calling on the other members to join ranks with the anti-Chinese policy of the EU. Eleven of the (now) 16 member states of the CEEC are also EU members. 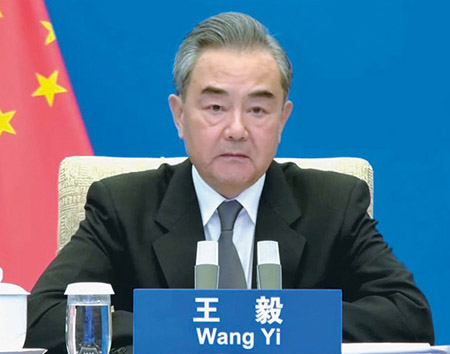 MSC
Wang Yi, State Councilor and Foreign Minister of China, held meetings in May with four European foreign ministers, who reaffirmed their commitment to cooperation with China.

The official visits to China of four European Foreign Ministers was a remarkable show of defiance of the anti-China policy on the last weekend in May, when they held meetings with China’s State Councilor and Foreign Minister Wang Yi and reaffirmed their commitment to cooperation with China. The group included the Foreign Ministers of Poland, Ireland, Hungary—all three of whom are in the EU—and the Foreign Minister of Serbia, a candidate to join the 27-nation bloc. All four Foreign Ministers praised China’s development and thanked the country for its assistance in dealing with the current COVID-19 pandemic. Wang identified areas of cooperation as trade, logistics, health care, technological innovation, energy, the digital economy, and the innovation-driven economy, calling for creating new growth points in bilateral ties. All welcomed an expansion of Chinese investments.

Significantly, the representatives of three EU countries underlined the importance of the CAI and of the resumption of negotiations in an atmosphere of dialogue. Those three members of the CEEC—Serbia, Poland, and Hungary—called for continuing to develop the organization of a platform for economic cooperation between China and the CEEC’s European members.

Wang, in his meeting with Polish Foreign Minister Zbigniew Rau on May 29, proposed that the two countries explore the alignment of China’s 14th Five-Year Plan (2021-2025) with Poland’s pandemic recovery program. The latter is designed to facilitate the use of EU structural funds. For his part Rau said Poland hopes to expand the export of agricultural products to China as well as the above-mentioned areas. Despite pressure to break ties with China, Poland values these ties, especially given the fact that it has become a hub of growing railway connections between Europe and China. 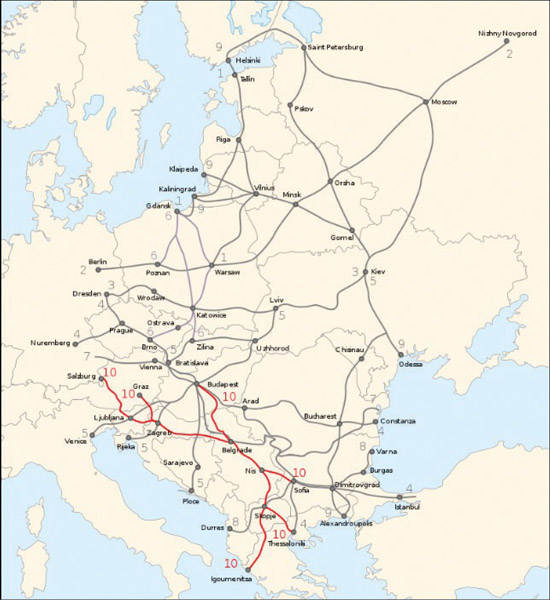 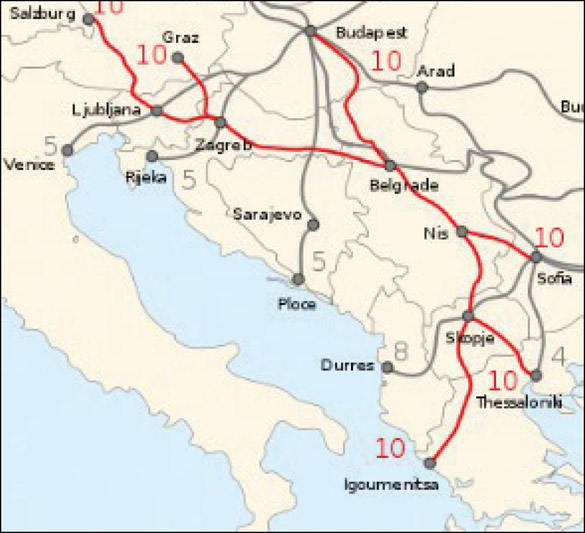 In his meeting with Irish Minister for Foreign Affairs and Defense, Simon Coveney, on May 31, Wang emphasized that Ireland has enjoyed a trade surplus with China for the last decade; Coveney called for deepening cooperation with China in internet security, aviation, as well as in climate change and peacekeeping. In the same week, on May 28 and 29, the 7th China-Ireland Business Summit, a 2-day virtual event, was held in Ireland’s second-largest city, Cork, drawing a number of officials, business leaders, experts and scholars from both sides. Speaking before that event, Martin Heydon, Minister of State at the Irish Department of Agriculture, Food, and the Marine, said, “My ambition is to cement and further develop positive trade relations (with China) in the coming years ahead.”

Serbian Foreign Minister, Nikola Selakovic, thanked China for delivering Chinese-made vaccines and its investment in infrastructure. Both he and Wang emphasized enhancing their cooperation in the Belt and Road Initiative.

No sooner did Selakovic return to Belgrade than Serbian President Aleksandar Vucic on a Happy TV broadcast, June 1, said that his country will not approve sanctions against Russia and China. Vucic declared,

We are on the path to the EU. Serbia is a militarily neutral country. Serbia, unlike some other states which are on the European path, won’t ruin its relations and has great relations with China and Russia. We won’t impose any sanctions either against China or against Russia—that’s it. This is our policy, this is not any balancing, this is the best policy, which proved itself both during coronavirus, the purchase of vaccines and other things. This is the best policy for the country’s citizens and there is not much philosophy here. We will continue this policy as long as we are able to conduct it. 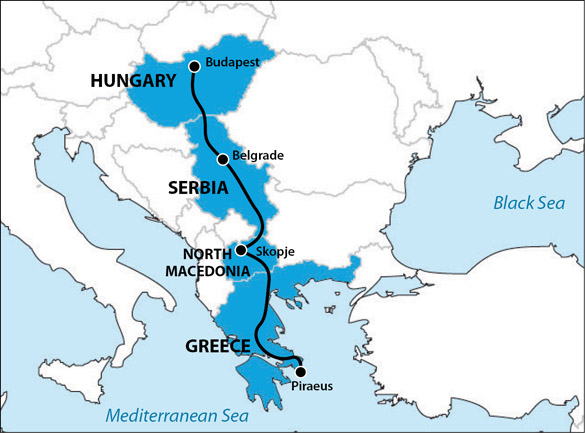 EIRNS
China and Russia are deeply involved in reconstructing and expanding Serbia’s railway network, especially along Transport Corridor 10 between the port of Piraeus and Budapest.

Both China and Russia are deeply involved in reconstructing and expanding Serbia’s railway network, especially along European Transport Corridor 10, which links the Greek port of Piraeus with North Macedonia, Serbia, and Hungary. China holds a majority interest in the port and has made Piraeus the largest container port on the Mediterranean. Demonstrating the importance of this corridor and China’s role, is the fact that the rail freight operator PEARL S.A., a joint venture between Greek interests and China’s Cosco shipping company that operates the port, has increased the number of freight trains along the corridor from 64 trains per year, when it started operations in 2019, to 1,300 trains by the end of 2020, a 1,900% increase. China is now building the crucial link of this rail corridor with a high-speed connection from Belgrade to Budapest.

Hungarian Foreign Minister Péter Szijjártó, at his meeting with Wang on May 31, presented him with the Order of Merit of Hungary, Medium Cross with Star. Szijjártó said that Wang had proved his friendship during the coronavirus pandemic. By offering Hungary the opportunity to purchase the Sinopharm vaccine, Wang “helped secure the safety of one million Hungarian people,” he said. After their meeting Szijjártó said Hungary’s planned vaccine plant will be fitted out for production of Chinese vaccines against COVID-19 as well as other vaccines, and further that the agreement would mean a “great strategic advantage” for Hungary.

Prior to Szijjártó’s visit to China, Hungary had signed on May 2 an agreement with Shanghai-based Fudan University to build an international campus in Budapest for up to 6,000 students. This will be the first Chinese university campus in the European Union and will also attract Chinese investment and research to the country.

Just prior to the visit of the four foreign ministers to China, Chinese senior diplomat, and Politburo member Yang Jiechi visited Slovenia and Croatia on May 25-26, after leading the Chinese delegation at the 16th round of China-Russia Strategic Security Consultation in Moscow the day prior. High on the agenda of these meetings was discussion on implementing the results of the recent summit of the leaders of the CEEC “17+1” bloc of which Slovenia and Croatia are members. Croatia and Slovenia have embraced bilateral opportunities with China under the Belt and Road Initiative (BRI) and China is particularly interested in upgrading their ports on the Adriatic Sea. 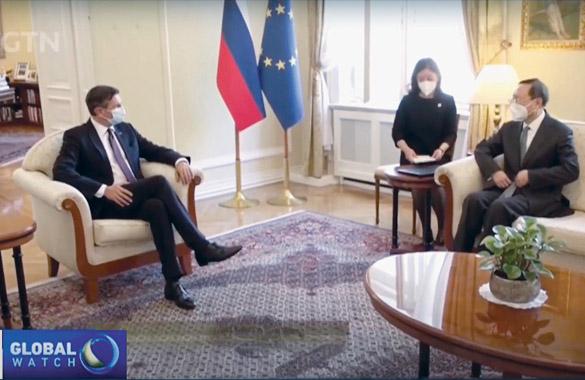 On May 26, Yang met with Slovenian President, Borut Pahor, who told his guest that Slovenia and China share a profound friendship and the relationship is based on solid foundations. Slovenia is willing, he said, to deepen mutually beneficial cooperation. In the second half of 2021, it will assume the presidency of the Council of the EU and is willing to play a positive role in promoting EU-China relations and cooperation between the CEEC and China.

On May 27, Yang met separately with Croatian President Zoran Milanovic, Prime Minister Andrej Plenkovic, and Parliament Speaker Gordan Jandrokovic in Zagreb. According to the Chinese foreign ministry statement, the Croatian leaders called the Croatia-China friendship “as strong as diamond.”

As part of integrating Croatia into the Belt and Road Initiative, Chinese investors have recently acquired majority ownership in the small Croatian port of Zadar and have expressed interest in renovating and modernizing the railway lines linking that port to wider transportation networks. The Chinese-funded Peljesac bridge, which will link two parts of Croatia divided by a stretch of territory belonging to Bosnia-Herzegovina, is in the process of being completed.

The small country of Montenegro, a member of the CEEC and NATO but not the EU, was granted debt relief by China following a telephone discussion on May 26 between China’s President Xi Jinping and Montenegro’s President Milo Djukanovic. China has agreed to the postponement of Montenegrin debt service payments on a loan that financed the Montenegro Highway connecting the port of Bar on the Adriatic with the North-South Corridor 10. According to news portal Euroactiv.com, Djukanovic told Xi that this highway is an historic infrastructure project, the first section of which is expected to be completed by the end of November.

Due to pandemic-related financial troubles, Montenegro was faced with defaulting on the first payment on the loan, which was extended by the Exim Bank of China in 2014 at 2% interest, and whose six-year grace period was expiring this year. Western media pushed the scare story that the Chinese would seize Montenegrin assets in case of default, as per contract, and the EU Commission turned down a Montenegro government request for help. If the EU complains that China is thus gaining influence in Eastern and Southern Europe, Brussels has only Brussels to blame.

The pure logic of cooperation with China will assure that these will not be the last demonstrations by European countries in putting their national interest above the dangerous geopolitical games of those wishing to mimic the British Empire.

[fn_1] The “17+1” China and Central and Eastern European Countries (CEEC) have been comprised of Albania, Bosnia and Herzegovina, Bulgaria, China, Croatia, the Czech Republic, Estonia, Greece, Hungary, Latvia, North Macedonia, Montenegro, Poland, Romania, Serbia, Slovakia, Slovenia, and Lithuania. Bowing to pressure from the anti-China lobby in the EU, Lithuania dropped out of the group earlier this year. [back to text for fn_1]