I. Resistance to a ‘Green’ Hyperinflation 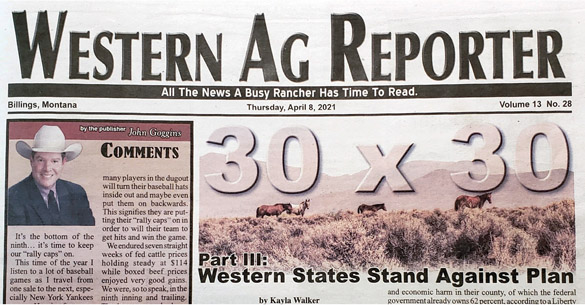 Reflecting the growing opposition to the Green New Deal among farmers and ranchers, the Western Ag Reporter has run a series of four articles exposing Biden’s 30 x 30 scheme and Executive Order 14008.

June 12—One of the strongest international lines of resistance against the deadly Green (New) Deal/Great Reset is from the U.S. Western and farm states. Their lawmakers, other leaders, and citizenry are in motion to stop, in particular, the attempted ‘30 by 30’ plank of the Green agenda, which asserts that by 2030, 30% of U.S. lands and waters should have no human economic activity on them—agriculture, minerals, or any such functions, which, the Green dogma asserts, will save the overheating of the planet by reducing emissions of CO2. Secondly, the Green ideology declares that reducing mankind’s activity makes way for more biodiversity of plants, animals, insects, etc. On June 10, U.N. agencies issued a 28-page report on this titled, “Biodiversity and Climate Change.”

The 30x30 directive was issued by President Joe Biden on January 27, in his Executive Order 14008, “Tackling the Climate Crisis, at Home and Abroad.” Before that, on inauguration day, Biden issued EO 13990, titled, “Protecting Public Health and the Environment and Restoring Science to Tackle the Climate Crisis” mandating that regulations be developed on how to capture and “monetize” CO2 and other emissions.

Biden’s 30x30 action lines up with similar moves in Canada and Mexico, and over 50 other nations, pushed along by the World Economic Forum and the “High Ambition Coalition for Nature and People” (HAC), to achieve what they call “a global deal for protecting at least 30 percent of the planet.…” This 30 percent set-aside concept is a soft sell of the 50x50 fantasy of the likes of E.O. Wilson, the American biologist, who has long campaigned for half the Earth to be kept human-free by 2050, to preserve biodiversity.

The area of U.S. land already owned by the Federal government (for all purposes, and in all conditions) is about 28 percent (540 million acres) of the total land area (2.27 billion acres) of the nation. However, only a portion of that Federal land—a portion estimated at 10 to 12 percent of all U.S. land area, is what is called “protected land,” generally defined as wilderness, plus national parks.

But how is the full 30 percent of U.S. land area to be set aside to meet the 2030 mandate? Section 216 of EO 14008, which calls for “conserving” 30 percent of the U.S. land area, i.e. ending any human economic use of it, is worse than vague on specifics. The obvious questions are hot—will the Federal government stop human use (e.g., grazing, mining, transportation) on already Federally owned land? Will the Federal government take over more land, or will it designate greenie groups or local and state governments to acquire land, to then designate this area to remain out of production? Who will be dispossessed?

One unilateral move was made in mid-April, by the U.S. Department of Agriculture, to expand the land in its Conservation Reserve Program (CRP), which contracts with farmers to take land out of production for a set time period, for an annual fee. Just before Biden’s April 22 World Leaders Summit on Climate, Agriculture Secretary Tom Vilsack announced he will raise the CRP by four million acres. Vilsack told Illinois Public Radio that,

The President has committed to a 30x30 effort: 30 percent of our working lands and public lands being dedicated in some form or fashion to conservation [by 2030.] I think that also plays to the strength of CRP. I think it’ll play a particularly important role in that. 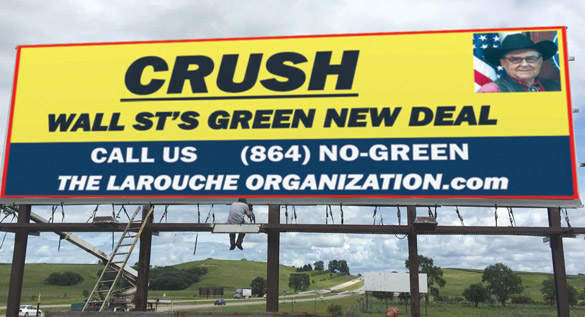 Courtesy of Ron Wieczorek
Beginning in April, the USDA began expanding its Conservation Reserve Program, paying farmers to take land out of production, while hundreds of millions around the world are starving to death. Here, one of two large billboard signs along Interstate-90, 35 miles east of Mitchell, South Dakota.

We are not aware of any Constitutional or statutory authority for the President, the U.S. Department of the Interior, the U.S. Department of Agriculture, or any other Federal agency to set aside and permanently conserve 30 percent of all land and water in the Unites States.... Obtaining the 30 percent goal from state or private lands would require your Administration to condemn or otherwise severely limit the current productive uses of such lands, infringing on the private property rights of our citizens and significantly harming our economies.

In the four months since Biden took office, a raft of actions has come out against his green Executive Orders, and specifically the 30x30 mandate. The measures include a multi-state lawsuit in Federal Court, several bills filed in Congress—the main one in both chambers, titled, “The 30x30 Termination Act,” joint letters against 30x30 by governors, and resolutions passed by dozens of counties in the western states and the Farmbelt. Influential regional media have kept up attention to the fight. For example, the Montana-based Western Ag Reporter ran a series of four articles exposing the 30x30 scheme and Executive Order 14008.

In this charged context, the Biden Administration’s report released May 6, titled “Conserving and Restoring America the Beautiful,” which was mandated by his Executive Order for publication after 90 days of preparation by relevant government agencies (Interior, Commerce, and Agriculture), was a whimper, not a shout. It was supposed to present more mechanics on which lands and waters would be locked out of human use—in which states, by what means, etc. Instead, it stuck to low-key blather about “collaborative and inclusive” discussion on what lands to reserve from use, and so on. Even so, it rankles. The report announced that the government will start an “American Conservation and Stewardship Atlas” to “track the amount of protected land and water” and report to Congress each year.

There is no science behind the 30x30 demand, or other green dictates declaring that the Earth is overheating from too much human activity. The dynamics affecting large-scale shifts in the Earth’s climate are located in the domain of changing solar activity and beyond. This was addressed, for example, by Wyoming rancher Robert M. Harshbarger, who wrote a letter to the editor of the Western Ag Reporter (April 8), headlined, “What’s the Rush?” He used the example of the record of post-glacial sea level rise, happening “long before the industrial revolution and widespread use of fossil fuels,” to debunk the claims of the Green New Deal. He asked,

Are we really going to eviscerate our current, reliable, energy infrastructure ... to replace it with intermittent, unpredictable, and more expensive ‘green’ energy, based on the manufactured fear of a world ending in climate catastrophe? That ‘catastrophe’ has been ongoing for the past 6,000 years.

What the proponents of the 30x30 plan are proposing is to destroy production of energy, food, water and other necessities of life for millions of people, by cutting economic activity in the name of saving the planet. This point is addressed—at least implicitly, in many of the objections to 30x30. Otherwise, the most widespread accusation, is that Executive Order (EO) 14008 is Federal overreach and a land grab. It’s a threat to personal and property rights.

On March 8, a lawsuit was filed against Biden’s EO 13990, in Federal Court by 12 state attorneys-general, led by Missouri AG Eric Schmitt. The suit charges that Biden does not have the authority to put “social costs of greenhouse gases” into Federal regulations, and the potential impact of all this will be to harm the economy and the population. Schmitt said on March 8,

From higher energy bills to lost jobs, this massive expansion of Federal regulatory power has the potential to impact nearly every household in this state—that’s why today I’m leading a coalition of states to put a stop to this executive order and protect Missouri families.

Through the spring, local town hall meetings in these and other states saw large crowds gather to get briefed on how to oppose the green orders. A featured speaker has been Margaret Byfield, whose Texas-based organization, American Stewards of Liberty, posts draft texts for resolutions and statements of opposition against the 30x30 “land grab.” As of early June, nearly 50 counties in 11 states—from Montana to Texas—have passed resolutions against 30x30, with still more pending a vote.

In May, bills titled the “30x30 Termination Act” were filed in both the U.S. House of Representatives and Senate. The House bill was filed May 7 by Rep. Lauren Boebert (R-CO) and Rep. Doug LaMalfa (R-CA,) with 20 more co-sponsors. Her press release at the time of filing, gave statements of support from eight of these sponsors, plus many other elected officials, including Nebraska Gov. Pete Ricketts and Alaska Gov. Mike Dunleavy; and nine county commissioners from Idaho to New Mexico. In addition, 31 business and political organizations, and six individuals endorsed the initiative to stop the 30x30 plan, ranging from the New Mexico Cattle Growers Association to the Industrial Minerals Association-North America.

The Senate version of the bill was introduced May 18 by Roger Marshall, MD (R-KS) and Kevin Cramer (R-ND).

The House and Senate bills followed a March 16 letter from Republican members of the House and Senate Western Caucus, “demanding answers” of President Biden, on what the 30x30 mandate concretely involved. The mandate showed “a lack of information and ambiguous goals,” amounting to “a dangerous thoughtlessness,” the letter said. The Caucus leaders, respectively, are Rep. Dan Newhouse (R-WA) and Sen. Steve Daines (R-MT). Their letter is signed by 50 House and 12 Senate lawmakers.

Tim Rush and Mark Bender contributed to this article.