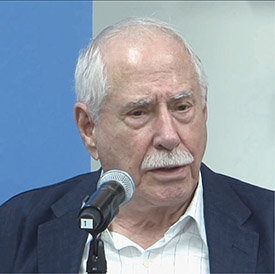 June 28— Hamlet said, “Take him for all in all, he was a man; I shall not look upon his like again.” Senator Mike Gravel was a man who stuck firmly to the truth, in public life, for 50 years. When shall we in America look upon that like again? The construction worker, army counterintelligence officer, real estate businessman, Democratic U.S. Senator from Alaska (1969-1981), feisty Presidential candidate, devoted husband to his wife Whitney and father to two children and four grandchildren, died at home in California at age 91 on June 26.

Mike Gravel is of course best known to millions over half a century, for having the courage—when Daniel Ellsberg took the risk and sought to release the Pentagon Papers, some truth about the Vietnam War—to read those Papers into the Congressional Record during the tense 1971 standoff when any other form of publication for them was blocked. But Senator Gravel undertook many risks and stubborn political interventions in national life besides that one. In fact, he made reading the Pentagon Papers part of his then ongoing campaign to take the military draft away from the Vietnam War planners. He said of his Senate career, in the preface to his autobiography, A Political Odyssey, written with journalist Joe Lauria:

My fight against militarism turned into a personal battle with Scoop Jackson, the senator who personified the military-industrial power even more than I personified its opposition.

In the 2007-08 campaign for the Democratic nomination for President, Gravel took on Biden, Obama, Clinton and others in seven debates “and reportedly ‘won’ two of them,” he wrote in the autobiography. “Blind polls taken on the issues, without mention of any candidate, repeatedly identified the issues I was raising.” And that was what was important, especially one issue: the danger of another, nuclear world war. This video clip from one of those debates shows the fearless force, and humor, with which Mike drove that home.

We join the world in recalling and recognizing the importance of United States Senator Mike Gravel, who passed away yesterday. Gravel immortalized himself as a man of courage with his release of the Pentagon Papers back in 1971. He also appeared in several conferences with our organization. On September 12, 2015, he joined Helga Zepp-LaRouche, former U.S. Attorney General Ramsey Clark, and Lyndon LaRouche in a forum in New York City. Ramsey Clark also passed away this year. The three war veterans—Clark, Gravel, and LaRouche—enjoyed each other’s company, and they enjoyed discussing the marked differences and remarkable convergences in their respective views of the world.

In a short video from that 2015 event, Senator Gravel described to his two fellow senior, truthful leaders of the last generation, the dangers of the present day, his earlier life, and how he faced the truth.

So, it’s the total human insanity we have that we can deal and manipulate and control the bomb. We can’t; not at all. We’re victims of circumstance. So, when I take your views—they’re as valid as mine—but my view is optimistic; I’m not old enough yet to be totally pessimistic. But my view is that what China is doing, what China is doing with the help of Russia, and with the BRICS, is really where the future of mankind lies in terms of solutions. Not our leadership; it’s going to be what they’re doing and how they’re handling it. As I pointed out to you earlier, Putin has run things very well. After the provocation of Ukraine—and most Americans have forgotten that we’re the ones that did this, but you don’t hear that anymore in the press. I don’t know if anybody’s seen the recent “Frontline” piece on “Putin’s Way”; it was horrible.

I have an intelligence background: When I was 23 years old, I was a top-secret control officer. At 23, mind you, I was in Germany as an adjutant for a communications intelligence service, and our cover was the CIC [Consolidated Intelligence Center —ed.]. And what did we do at this? There’s only two military officers—myself, 23, as a second lieutenant, and a lieutenant colonel who was in the sauce a good part of the time. The rest of it was run by Germans. What we did was, we’d open people’s mail wantonly, and wiretap people in Europe wantonly. That’s when I was 23 years old. So, you can figure when we had the Pentagon Papers come up in the Senate, and a Senator could not go in and read the papers, except being under guard, couldn’t take any notes. All I could think of was: When I was 23, I was acting with more power than any Senator can act right now in viewing the Pentagon Papers. So, little wonder that when Ellsberg approached me, and said, would I read the Pentagon Papers as part of my filibuster against the draft? I said instantaneously, “Of course, yes, I would.”

[I] could not start my talk without addressing the incredible loss of Mike Gravel. If all people in the United States would live up to his standards, the world would be a beautiful and peaceful place.