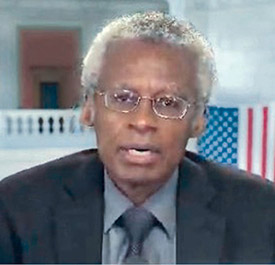 Dennis Speed moderated the first panel of the June 26-27 Schiller Institute conference, to which he welcomed everyone attending with a musical offering, followed by an extensive quotation from Lyndon LaRouche.

Good morning, and good day to people all over the world who have joined us for today’s online conference of the Schiller Institute: “For the Common Good of All People, Not Rules Benefitting the Few.”

We’re beginning this morning with a musical offering, Mozart’s Laudate Dominum, which will be performed by the Schiller Institute Chamber Singers, with Michelle Erin, soprano.

The first panel of our conference has been entitled, “Whom the Gods Would Destroy: War with Russia and China Is Worse than MAD.” Though the saying, “Whom the gods would destroy, they first make mad,” is often attributed to Euripides, it’s not entirely clear who first said it. “When a god plans harm against a man, he first damages the mind of the man he is plotting against,” is a formulation attributed to an unknown ancient Greek poet.

But whoever said it, the importance of that sentiment is not lost on us, particularly today. MAD in our title also refers to Mutual and Assured Destruction, the doctrine of nuclear war fighting that had prevailed since particularly the aftermath of the Second World War, often attributed to Henry Kissinger and others, and is a doctrine which was fought against, and which was given an alternative by the economist and statesman Lyndon LaRouche.

Let us listen to some words of Lyndon LaRouche, who wrote a work titled The End of Our Delusion. In the section titled “The Force of Tragedy,” he said:

It is essential today, if we are to locate the root of our present calamity, that what the U.S.A. has done to itself since the death of Franklin Roosevelt, but also more noticeably, since the assassination of President John F. Kennedy, is a full-blown tragedy in the strictest understanding of the principles of the Classical drama of Aeschylus, Shakespeare, and Friedrich Schiller. The meaning of “tragedy” is not limited to a case of a death or suffering which could have been avoided; in its strict, Classical meaning, it treats the case in which the victim, which may be an individual or an entire society, destroyed himself, or itself, as a result of a generally accepted belief, or, the same thing, an habituated tradition. In that strict use of the term “tragedy,” the recent behavior, or, lack of appropriate behavior by the campaign-money-conscious U.S. Congress, has been truly tragic in the full meaning of the term.

In applying that conception to the specific case of our presently crisis-stricken U.S.A., we must refer to the role of what both ancient Classical Greek and modern Classical-scientific culture recognize by the strict use of the term “dynamics,” as a term of Gottfried Leibniz’s scientific method, the method expressed by the insertion of Leibniz’s concept of “the pursuit of happiness” into our Declaration of Independence, and the premising of our Federal Republic’s policy-making on the same great principle of “happiness,” under which notion the “General Welfare” was inserted into our Federal Constitution.

This use of “dynamics” by me, here, means that, contrary to the dogmas of the academic and kindred ideologues of Romanticism, there are sometimes prophets in history, but there are no effective heroes among the typical, incumbent leaders of a culture which has entered a truly tragic phase of its existence. I speak of that tragedy into which the U.S.A. entered upon the death of Franklin Roosevelt. In all Classical tragedies, such as those portrayed by Aeschylus, Shakespeare, and Friedrich Schiller, it is the current form of a culture of the society as a whole which has failed, a systemic failure of a culture which grips all incumbent leaders of the society’s characteristic institutions, and also the great majority of the population in general. I know this very well; I was there, and I recognized that fact immediately, at that time.

We are now here, but do we recognize where we are? Well, apparently, the British destroyer HMS Defender did not recognize where it was a few days ago, and that could have triggered a change in history that even all of the aspirations and achievements of past history could not have reversed. What is posed to us today, is the need for the aesthetic education of the emotions of mankind, before mankind commits suicide. The trans-Atlantic world’s rejection of the principle of Classical culture—we will be so bold as to suggest today and throughout our panels—is the primary strategic crisis facing all of civilization at this time. Because the principle of power that actually underlies the achievements of all great civilizations, lies in the principle of human creativity, the advancement of human creativity, and the creation of those political and cultural institutions that enhance, support, and develop human creativity.

It’s my honor to introduce to begin today’s panel, Helga Zepp-LaRouche, chairman and founder of the Schiller Institute.