When One Step Back Is Also One Step Forward:
The Coincidence of Opposites 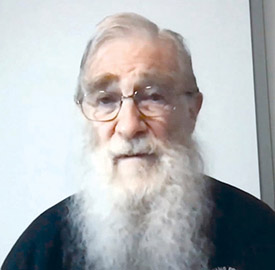 Ray McGovern is a co-founder of the Veteran Intelligence Professionals for Sanity (VIPS) and was an analyst with the Central Intelligence Agency. This is an edited transcript of remarks he delivered to the first panel, “Whom the Gods Would Destroy: War with Russia and China Is Worse than MAD!” of the June 26-27, 2021 Schiller Institute conference, “For the Common Good of All People, Not Rules Benefitting the Few!” Subheads have been added.

Let me recall, five years ago now, a small delegation, of which I was a part, was in Crimea. It was the commemoration of when the Nazis attacked the Soviet Union, and we know what that brought: 27—well, Putin says 26, he doesn’t exaggerate, 26 million, 26 million Russian or Soviet people dead. OK? Now, by comparison, how many Americans were dead after World War II? How many were killed? A little bit over 400,000. Do the math. Do the math.

So here it was, the anniversary of the Nazi attack. We were a small delegation. There was a rather sizable gathering in Crimea, where we were, and they asked me to speak. The best thing I could think of was to recite an appropriate poem that I had memorized way back in college, a poem by the Russian poet Nekrasov, known as the poet of Russian grief, russkoy skorbi. The poem is called “Paying Attention to the Horrors of War.” I’ll give a short translation into English after reciting a few stanzas in the original Russian.

[After the recitation in Russian, McGovern proceeded, first with the title of the poem, and then to an impromptu translation of some of the stanzas interspersed with certain Russian words and phrases, not included here.]

“Paying Attention to the Horrors of War.”

At every new victim of the war,

I don’t feel real sorry for the hero himself, or his wife, or his best friend.

I can’t feel sorry for those folks because there’s something bigger at large here.

Best friends forget their best friends. But somewhere there is one soul who will remember, right to the grave.

Amid all the prosaic things of everyday life, the only sincere tears that I have witnessed are the sincere tears of poor mothers.

The sincere tears of mothers—they do not forget their children, who perish on the bloody battlefield. Just as a weeping willow tree can never lift its branches.

So, poignant? Yes. Relevant? Yes. There were that day in Crimea—Yalta is where we were—there were mothers there, there were children of mothers. There were relatives of people who died during World War II, again, just a drop in the bucket of the 26 million Soviet citizens that perished in that war.

So why do I say all this? I’m saying this because, when you look at the horrors of war, my God! you have to say, “You’d be crazy—you’d be crazy to start one!” And that’s what we’re talking about, isn’t it? Those whom the gods would destroy, make them crazy first. Right? Make them full of hubris. The original expression did not come from Euripides, like they say in some of the books; it came from Sophocles—from Sophocles’ Antigone. And I have to tell you that in my fourth year of Greek, we translated Antigone verbatim.

It has to do with hubris. Not only King Creon’s, but Antigone’s hubris—hubris being overweening pride, which led to the downfall of many a Greek tragic hero. That’s what we’re dealing with here.

And I think that Biden, as he came to Geneva to do the summit with Putin, I think he was artificially inflated with hubris. I think that Biden was sort of pumped up to think: Now I can tell these Russians who they have to listen to, and it ain’t the Chinese. It’s us.

The last thing I’ll say on this, is that it’s really very important to look at the origins of the summit to understand what really started it. And if you look back just before the date was announced—we’re talking April 13th—and four very important things happened that day. Four, count them. One, two, three, four.

First one, the head of NATO, Jens Stoltenberg: “Oh, my God! The Russians are massing troops in unprecedented numbers on Ukraine’s border!”

The second thing that happened is the Russian Defense Minister said, “You got that right, Stoltenberg. You got that absolutely right. Would you believe two armies and three airborne formations?”

The third thing that happened is the Deputy Foreign Minister, a heavyweight named Ryabkov, Sergei Ryabkov—second only to [Sergey] Lavrov—he makes this statement saying, “Look, you all are intending, you Americans are intending to enter the Black Sea with two guided missile destroyers—not a good idea! We can’t guarantee their safety. Not a good idea at all.” (Parenthetically: those ships were turned around, toward Greece.)

Fourth and most important, Biden calls Putin. He said, “My God, I hope things are simmering down now. We’ve tried to get [Ukrainian President] Zelensky to stop making these crazy statements, like taking back Crimea. How would you like to have a summit?” And Putin says, “Well, you know, we always like to meet face to face.” That was the 25th, I think, it was announced that they would meet really quickly, three weeks later, in Geneva.

So, what accounts for this very ill-prepared, quick summit? Well, as one of my subheads in one of my articles said, “You Asked for It, Joe.” And he did ask for it. And he was scared.

And I just can see one of these wet-behind-the-ears young sophomores saying, “Mr. President,” like Jake Sullivan, let’s say, “you know, this is serious. We better—you know, how about—Yeah, how about a summit? Why don’t you propose a summit?” So, in these very odd, tense circumstances, Biden proposed a summit.

The Changed Correlation of Forces

Now on the way, of course, they tried to brief Biden on the realities. My very first piece on the summit had to do with the changed correlation of forces. Look, you have a virtual military alliance between Russia and China. This is a big deal. Don’t take any idea that you can exploit the triangular relationship between Russia, China, and the U.S. The barn door is closed on that. That happened back in the 70s. They’re very much together. As a matter of fact, the triangle may be equilateral still, but it’s two sides against one. And you’re the odd man out, Mr. President.

I’m not sure these sophomores had enough sense of history to warn the President about that. But if they did, he got it completely wrong. He has a tin ear. In other words, what he said in his solo press briefing after the summit was, “You know, I don’t want to quote Putin, because that would be not appropriate. But let’s say, you have a multi-thousand-mile border with a country named China, that’s not only trying to be the major economic power in the world, but the major military power in the world.”

And then plane-side, before he departed, he said, “You know, the Russians are very, very, very much in a tight spot. You know why? Because they’re being squeezed by China.” [laughs] Does he believe that? Maybe somebody told him about what Kissinger and Nixon were able to do in 1972, and he thought, “Well, I can do that again.”

If you don’t understand what the old Soviets used to call the “world correlation of forces” and how they change, in terms of the years since—and we’re talking five decades—these guys that come out of the same Ivy League schools, that Walt Rostow, McGeorge Bundy, the “best and the brightest” on Vietnam, came out of. They believe they’re exceptional. They’re told that—from their first special school. They believe that the U.S. is exceptional. And so, it’s hard to get a turnaround of the mind, to get real in this new world, where the U.S. is not only not exceptional anymore, not able to take the advantage of other great powers, but doesn’t seem to realize that.

So, we get again to the question of hubris: The old Greek tragic flaw which did in Antigone as well as King Creon. Now, we have to be careful that it doesn’t do us all in. And that, I think, is what Biden and Putin need to cooperate on.

Now I say that’s rhetoric. It’s significant rhetoric because it goes back to Reagan and Gorbachev. But, what would give me more hope, would be for Biden to go to Omaha and cashier that admiral who heads up the equivalent of SAC, Strategic Air Command, who has said, “Using nukes is not only possible, it’s a probable—yeah, sure we could use nukes.” So, unless Biden cashiers that guy or at least reins him in and says, “Don’t say that anymore!”—the rhetoric will not be as strong as I would prefer it to be.

I ran on longer than I thought. But I’m happy to entertain any questions or any remarks that you’d like me to reply to. Thanks.