This article appears in the July 23, 2021 issue of Executive Intelligence Review.

Afghanistan: Terrorism, War and Drugs
—Or Peace Through Development 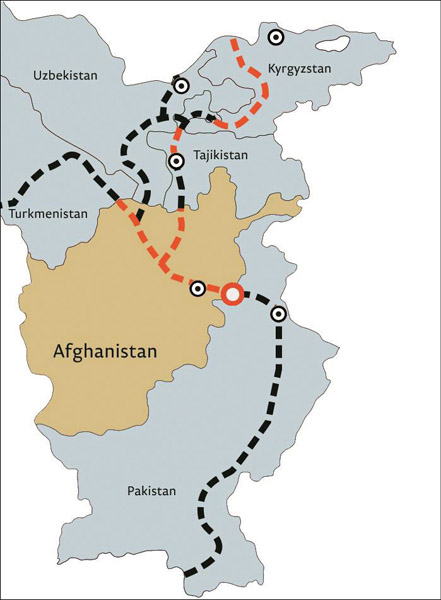 The map shows part of the Russian Railway proposal. Existing rail is in black, proposed rail is in orange. These rail lines are part of a north-south development corridor from Omsk, Russia to Karachi, Pakistan, intersecting or paralleling planned Chinese Silk Road Economic Belt railroads in both Central Asia and Pakistan. The Russian proposal was published in the 2014 EIR Special Report, “The New Silk Road Becomes the World Land-Bridge.”

July 17—The editorial in the July 16 issue of EIR by Helga Zepp-LaRouche posed the issue facing humanity in the wake of the failure and collapse of the 20-year NATO war in Afghanistan:

The strategic turbulence caused by the withdrawal of NATO troops from Afghanistan, offers an excellent opportunity for a reassessment of the situation, for a correction of political direction and a new solution-oriented policy. The long tradition of geopolitical manipulation of this region—in which Afghanistan represents in a certain sense the interface from the 19th century “Great Game” of the British Empire to the “arc of crisis” of Bernard Lewis and Zbigniew Brzezinski—must be buried once and for all, never to be revived. Instead, all the neighbors in the region—Russia, China, India, Iran, Pakistan, Saudi Arabia, the Gulf States and Turkey—must be integrated into an economic development strategy that represents a common interest among these countries, one that is defined by a higher order, and is more attractive than the continuation of the respective supposed national interests.

Were Afghanistan to be left in the hands of drug lords and their armies following the withdrawal of NATO forces, every man, woman and child in the world would feel the impact, given the fact that a destabilized Afghanistan would continue as the source of 80% of the world’s opium and as a training ground for ISIS and al-Qaeda.

The only option which could prevent such a disaster is that referenced by Zepp-LaRouche, and proposed by her husband, the late Lyndon LaRouche, even before George W. Bush launched the war on Afghanistan 20 years ago—that is, to allow Afghanistan to end its history as the “graveyard of empires,” and to become the hub for an expanded New Silk Road, with rail lines connecting the landlocked countries of Central Asia to the ocean via a north-south rail line through Kabul and Pakistan, as well as east-west connections following the ancient Silk Road.

LaRouche’s proposals began with the necessity that all the countries in the region meet and cooperate with the Afghans to integrate development of the entire region, to the benefit of all. There are now, over this past week, developments which convey the very real potential that such cooperation and integration is possible. The U.S. military withdrawal after 20 years of useless, destructive, deadly warfare, has sparked actions by all of the regional nations, which came together in a series of meetings this week largely focused on the urgency of bringing real development to Afghanistan. These included:

The foreign ministers of the Shanghai Cooperation Organization (SCO), which includes China, Russia, India, Pakistan and four of the Central Asian “stans,” as well as ten other nations as Observers or Dialogue Partners, met in Dushanbe, Tajikistan, on July 13-14. At the center of the discussions, including the sideline discussions, was the idea that the China-Pakistan Economic Corridor (CPEC) could be extended, branching out from the rail line running from China through Pakistan to the Gwadar Port on the Arabian Sea. From Islamabad, the branch would pass westward through Peshawar, the Khyber Pass, to Kabul, Afghanistan, then onward north to Tashkent, Uzbekistan, and eventually on to the Eurasian Land-Bridge lines connecting China to Europe.

This plan was launched in February in a meeting of Pakistan, Afghanistan, and Uzbekistan, who called the plan the Khyber Pass Economic Corridor. A proposal has been submitted to the World Bank, although the Asian Infrastructure Investment Bank (AIIB) and other Asian credit institutions could also become involved. In that light, Pakistan this week proposed the creation of an SCO investment bank. Pakistan and Afghanistan have also agreed to the construction of a highway from Kabul to Dushanbe, Tajikistan.

Preceding the SCO forum, Chinese Foreign Minister Wang Yi visited Turkmenistan, which is not a member of the SCO, but has a border with Afghanistan, to consolidate security and energy cooperation. Turkmenistan is China’s largest supplier of natural gas, through a series of pipelines which run through Uzbekistan and Kazakhstan.

On July 15-16, Pakistani Prime Minister Imran Khan travelled to Uzbekistan to meet with President Shavkat Mirziyoyev. Their Joint Statement declared that “regional integration and connectivity” was the “cornerstone of economic development and progress,” and reiterated their support for the Khyber Pass Economic Corridor project.

Also on July 15-16, the “International Conference on Central and South Asia Regional Connectivity, Challenges and Opportunities” was held in Tashkent, with representatives of 40 regional and international governments attending. Uzbekistan began organizing this event following the February launching of the Khyber Pass Economic Corridor. Dilshod Saidjanov, an Uzbek official, told India’s ANI: “Economic development is the way to make Afghanistan stronger and probably more peaceful. Everyone wants better development in Afghanistan.”

Diplomatic efforts to resolve the political crisis are also taking place, aimed at bringing the Taliban and the Afghan government, currently led by a shared leadership of Ashraf Ghani and Abdullah Abdullah, to an agreement for a peaceful settlement of the war and to create some form of shared power. It is clear to all that without a development program which uplifts the entire population, such a political agreement would be stillborn. Meetings in Doha, Qatar sponsored by the United States, between the Taliban and the Afghan government, began in 2018, with the U.S. represented by former U.S. Ambassador to the United Nations, Zalmay Khalilzad, an Afghan-American.

There has been little progress, if any. A new round of talks began on July 17 under the current, dramatically changed circumstance. Abdullah Abdullah called for serious efforts toward an agreement, saying, “We cannot pay the price for this in blood and we cannot escape responsibility for it.” Mullah Abdul Ghani Baradar, the Taliban’s deputy leader and negotiator, pledged that “the Taliban will make efforts for talks to have positive result.”

Will the U.S. join the efforts for development? Lyndon LaRouche has famously argued that resolving intractable conflicts must put real development ahead of political agreements, addressing the common needs of both sides for economic well-being before a political agreement can be sustained. China’s Belt and Road Initiative, which evolved from LaRouche’s proposal following the collapse of the Soviet Union for a “New Silk Road” to unite the nations of Eurasia in shared development, is based on that principle.

But the British and the “war party” in the U.S., subsuming most of both political parties, are working in high gear to prevent any U.S. positive engagement with this regional development policy, instead escalating the anti-China hysteria, wildly accusing China of genocide and declaring the Belt and Road to be a devious plot to take over the world.

There is a sliver of hope, however, that the Biden Administration will take the sane approach of cooperation in development. A State Department release on July 16 was titled, “Announcing the U.S.-Afghanistan-Uzbekistan-Pakistan Quad Regional Support for Afghanistan-Peace Process and Post Settlement.” These are indeed the nations through which the Khyber Pass Economic Corridor would pass. The announcement states that “the parties intend to cooperate to expand trade, build transit links, and strengthen business-to-business ties.” The U.S. did send significant representatives to the July 15-16 Tashkent Conference referenced above—both Zalmay Khalilzad and the Assistant to the President for Homeland Security, Dr. Elizabeth Sherwood-Randall. However, it is not at all certain whether they are following the State Department policy of demonizing China and the Belt and Road, or if they are listening to the nations in the region calling for international cooperation to actually transform Afghanistan.

According to CGTN, Foreign Minister Wang Yi, in his presentations and private meetings at the SCO Foreign Minster meeting, pressed the group to weigh in on the United States to join in on the reconstruction of Afghanistan. He noted that the U.S. recently expressed its readiness to help Afghanistan maintain stability and conduct a peaceful reconstruction following the US and NATO withdrawal, so the SCO member states should urge the U.S. to honor such commitments.

Such a shift from the now-normal U.S. policies of sanctions, wars and regime change subversion should be strongly encouraged. President Joe Biden’s engagement with Russia’s President Vladimir Putin—despite equally vitriolic denunciations and sanctions from the Congress and from within his own administration against Russia as against China—could and should be repeated with China and President Xi Jinping. The Afghan Ambassador to China, Javid Ahmad Qaem, was quoted in Global Times July 17:

The only place where the U.S., China, and India could really cooperate, or at least there could be a starting point to cooperate between these rivals, if I can call them that, is Afghanistan.

An international agreement to cooperate with Afghanistan and its neighbors to transform the region into a central hub for the global Belt and Road process would also serve as a model for other crisis spots, including the war-ruined nations of Iraq, Libya, Syria, and Yemen. This is the principle of the Schiller Institute’s “Coincidence of Opposites”—bringing seemingly irreconcilable conflicts to an end by addressing the higher-order principle located in the common interests of all people, for peace through development. Such an optimistic approach may seem impossible, but the alternative is unthinkable. Humanity has risen up out of Dark Ages in the past, creating a renaissance when nothing less could work. This moment must find a people armed with no less than the creative will required to build such a new Renaissance. 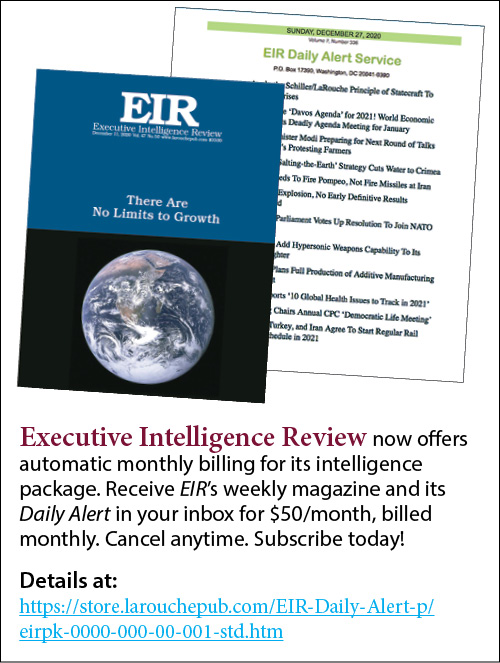