This transcript appears in the July 30, 2021 issue of Executive Intelligence Review.

Valuable Lessons on the Financial Crisis
From Experiences in Japan

Daisuke Kotegawa is a former official at the Ministry of Finance in Japan, and a former Executive Director for Japan of the International Monetary Fund (IMF). This is an edited transcript of remarks he delivered to the third panel, “Weimar Germany 1923 Comes Again: Global Glass-Steagall to End Hyperinflation” of the June 26-27, 2021 Schiller Institute conference, “For the Common Good of All People, Not Rules Benefitting the Few!” Subheads are the author’s. 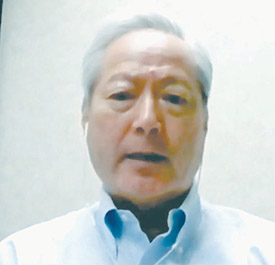 I was in charge of the financial crisis in Japan in 1997. In those days, Japan was the target of critics who believed in the so-called “global standard,” and accused Japan of accumulating non-performing loans based upon the Basel Rule agreed to in 1988 by members of the BIS (Bank for International Settlements). That same group of economists at the IMF attacked Asian countries, such as Indonesia and Thailand, at the time of the Asian economic crisis in 1998. The backgrounds of these economists were really undiversified; almost all of them were male and holders of Ph.D. degrees from prominent British or American universities.

A British expert in “Japanology” joined Goldman Sachs and made up a groundless “estimate” of the amount of non-performing loans in Japan. He and Goldman Sachs made a fortune in dealing with the non-performing loans business in Japan. Major securities houses in Japan, such as Yamaichi and Sanyo, went bankrupt, and large banks including Long-Term Credit Bank of Japan (LTCB) and Nippon Credit Bank had to be nationalized. Engulfed by attacks by critics from the United States, the United Kingdom, and their followers in Japan, the Financial Services Agency of Japan executed very tough examinations of bank assets across the board in accordance with the Basel Rule established in 1988 and announced its result to the public in 1998.

Based upon the publicly announced results of the examination of bank assets, the Japanese government injected public money to stop major banks from collapsing. Bank lending policies were tightened up to a level never seen in Japanese history, and many Japanese companies went bankrupt. With this backdrop, a considerable number of people committed suicide, including members of my former staff in the Ministry of Finance. Board members of failed financial institutions were arrested for alleged window-dressing.

For the next ten years, Western countries made fun of the Japanese economy as the “lost decade” or “lost two decades.” In Southeast Asian countries, such as Thailand and Indonesia, which suffered from the Asian economic crisis, and had to accept the IMF conditionalities, some number of ministers were put in jail.

Now, it is important to touch on the history of the Basel Rule enactment which caused such financial crises in Japan.

Since 1980, global financial markets had expanded dramatically, but on the other hand, issues such as accumulated debts and increasing derivatives transactions have become major concerns.

In addition, the United States and Europe, which wanted to invest in Japan in the 1980s, enjoying prosperity only among developed economies, asked Japan to open up its financial markets. The U.S. financial institutions had lent large amounts to Latin American countries at high interest rates in the 1980s, which were going bad, and many Wall Street financial institutions were in deep crisis, including Citibank.

In those days, Japan sought to become the second largest shareholder in the Bretton Woods institutions, such as the World Bank, which reflected Japan’s rank in GDP. Japan’s GDP became the world’s Number 2 in 1968, but even in 1983 its shareholder ranking in the IMF and the World Bank remained at Number 5.

I was in charge of the negotiation of this ranking issue of the World Bank in 1984. After the last meeting of the negotiation, the United States suddenly overturned the agreement and started to press for the opening up of Japanese financial markets as a precondition for becoming the second largest shareholding rank. Despite the strong domestic opposition against opening up the market, we finally succeeded to reach the agreement.

In order to stop such an “invasion” of Japanese financial institutions into London, the Basel Committee on Banking Supervision established a rule that asked banks engaged in international operations to maintain their capital adequacy ratios at 8% or more as a standard. This rule superficially reflects past experience in securing transactions in global financial markets, as failed financial institutions were characterized by a decline in their capital adequacy ratios. However, the real intention was to block Japanese banks from invading London, as I explained. Economically, Japanese banks did not need such a high-level buffer, due to the prosperity of the Japanese economy.

When the Lehman Brothers bankruptcy shock came into force in 2008, no examination of financial statements was conducted. In order to conceal the devastating situation of its financial statements, Western banking supervision authorities did not announce the result of bank examination based upon the Basel Rule. Instead they introduced the notion of the “stress test,” which is a completely fake notion, to check the health of financial institutions. Why? If, at the starting point of an examination, a certain bank is insolvent, how its assets would be affected by economic stress would not make sense at all.

If the United States authorities had observed the Basel Rule, insolvent U.S. banks would have been liquidated, instead of being bailed out. Some presidents of U.S. banks, which were owned by foreign banks, confessed that they were quietly encouraged by U.S. supervisory authorities to commit “window dressing” so that their banks would not report insolvency. As a result, nobody in the banking communities in the U.S., nor in Europe, were arrested or punished. No Western countries seemed to care about “moral hazard.” Bailing out even investment banks would lead to the moral hazard of bankers who knew that the government would always save them.

The U.S. Congress at that time adopted a resolution that asked the Association of Certified Public Accountants to freeze “mark-to-market accounting” for a certain period, despite the fact that it was advocated and demanded by Western countries at a time of financial crisis in Japan and the Asian financial crisis. Short selling—which the United States told the Japanese authorities not to suspend in the 1990s—was prohibited in the U.S. after the Lehman shock.

Economists such as Lawrence Summers and Tim Geithner demanded, at the time of the Japanese financial crisis, that Japanese banks in trouble should be closed down, using the notion of a “hard landing.” This notion was thrown away after the Lehman shock in 2008, and no commercial bank went bankrupt. In addition, the U.S. government not only bailed out investment and commercial banks, it also bailed out large manufacturing companies such as General Motors. You can see a clear case of “double standard” here, and nobody in Asia respected U.S. banking authorities and experts after the Lehman shock. The United States completely lost its reputation as a fair country.

Following the financial crisis in late 1990s in Japan, the Bank of Japan (BOJ) tried various measures for economic recovery, including purchase of stocks by the BOJ and Quantitative Easing (QE). They did not work at all in stimulating the real economy.

Although this failed Bank of Japan experience was shared among central banks, the Fed introduced QE in the United States in order to secure liquidity for American banks. This was followed by the ECB (European Central Bank) and, in order to protect the Japanese yen from overly appreciating due to its relative scarcity to U.S. dollars and euros, the Bank of Japan also followed suit.

Excessive liquidity through QE resulted in unreasonable price increases of stocks and real estate. It created an unjustifiable boom of funds all over the world. There is grave concern about the timing of the tapering of QE as well as the unwinding of it which will follow. It will be impossible to do that at this moment without causing a collapse of the financial bubble in stocks and real estate.

Then, what should we do? It is essential to absorb the excessive amount of liquidity by real demand coming from a rising up of the real economy. From this perspective, it is absolutely necessary for advanced economies, the United States and Europe in particular, to launch unprecedented levels of public works to stimulate their economies. It should be noted that the movement toward a Green Economy has the completely opposite effect.

The world economy must get away from the investment-bank ridden “gambling economy” that has no relevance to the real economy. A return to the separation of investment banking from commercial banking is a prerequisite against the moral hazard of bankers. The reinstatement of the Glass-Steagall Act is needed.

The fair application of basic rules must be secured. The report that UK Prime Minister Boris Johnson asked for a waiver of some rules at the latest G7 meeting is worrisome, trying to bring about the recovery of the financial center in London. The only thing allowed, if asked to me, would be that “Any cross-border transaction of an internationally operating bank must be unwound before its bankruptcy.” Since this means that all losses of the bank must be covered by a taxpayers’ burden of the country where the bank is located, supervisory authorities would pay utmost attention on the operation of banks so that authorities would not have to take such an unpopular policy of bailing out, with the sacrifice of taxpayers’ money.