Alberto Vizcarra is the Director of the Citizens Movement for Water in Mexico. This is an edited transcript of his presentation delivered to the second panel, “Energy, World Health and the End of War: The Power of Energy Flux Density,” of the Schiller Institute’s July 24 conference, “There Is No ‘Climate Emergency’—Apply the Science and Economics of Development To Stop Blackouts and Death.” 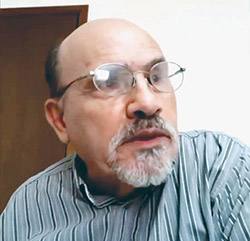 What characterizes climate is change. Ancient records of sudden events in this regard go back to times when the cause of evolution had not yet made man’s appearance on the planet possible. In primitive cultures, spreading fear of climate change and blaming human agro-industrial activity for this phenomenon, was a means of control and submission. Similarly today, what lies behind the financial interests that are currently warning about a climate apocalypse, is an intention to subject nations to their neocolonial plans for de-industrialization, looting of natural resources, and population reduction.

And yet, Mankind is possible despite those who preach a coming climate Armageddon which is tailor-made to their interests. It is with this in mind that we have to address the challenges that the climate poses to us and reassert the principle that human intelligence is the result of ecological evolution whose causal origin posed the need for a mind (noosphere) that understands the evolution of the universe in order to increase its potential for life. 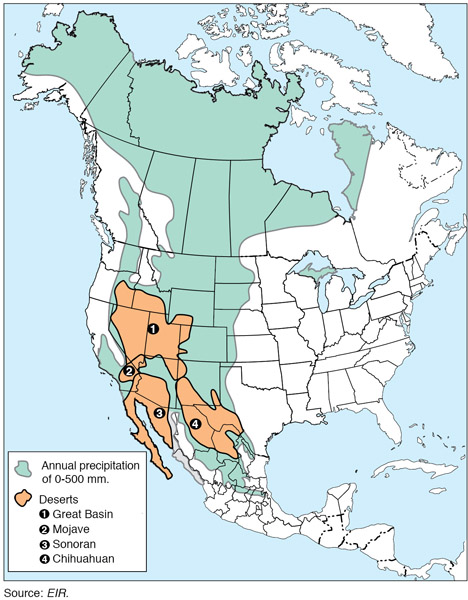 In light of these basic principles, we have to address the recurring drought cycles that occur in the vast expanse of territory shared by Mexico and the United States, known as the Great American Desert. (See the map, “El Gran Desierto Americano.”) These episodes of drought have increased in intensity, and even pose the danger of conflicts over the waters of the Colorado River and the Rio Grande, which the two countries share. Tensions have grown because the water consumption requirements over the last fifty years have significantly increased, due to population growth and its concomitant needs. When the Boundary and Water treaties were signed by Mexico and the United States in 1944, the existing population in the two-nations’ border states was approximately 15 million people. Today, the population in the same region is estimated to exceed 100 million.

It was foreseeable that such a water shortfall would be reached, worsened by the impact of drought episodes typical of a desert region. And the governments of the late 1950s and early 1960s, which were still thinking about the future, had warned about it.

An old farmer from the Yaqui Valley, located in southern Sonora, Mexico, recounted that at the beginning of the 1960s, in a meeting with the Secretary of Hydraulic Resources in the government of President Adolfo López Mateos, the Mexican official told them—to underscore the importance that the U.S. was giving to food production—that the U.S. government was planning to build a large water management project which would use the vast run-offs of the mighty rivers of Alaska and Canada, and transfer that water to the great plains of the Great American Desert. The same farmer said that the food producers were astonished by what they heard, and that the Mexican official had answered optimistically: Since the harnessing of the atom was achieved, there are no limits to growth. The Mexican government official was referring to the North American Water and Power Alliance (NAWAPA).

Back then, Mexico was sharing common goals with the United States in the task of promoting water infrastructure, in order to provide huge quantities of fresh water that would allow the greening of the desert, with an expansion of land under cultivation and with extensive reforestation programs. This would allow the region of the Great American Desert to stop being a cloud-dissipating mirror, to become instead an area that generates columns of humidity that help improve the climate and increase rainfall. 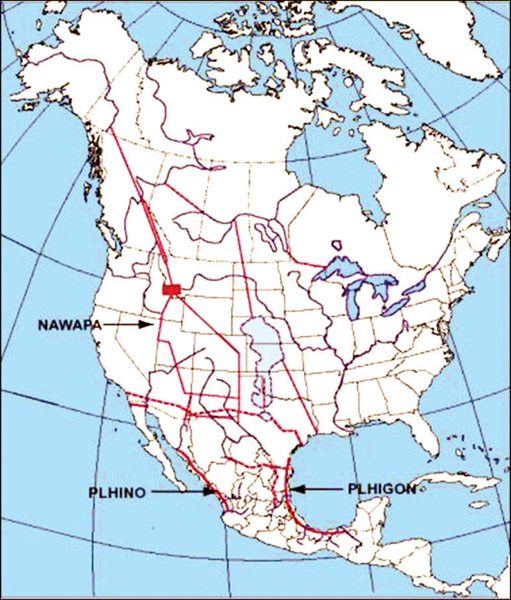 Within Mexico, the Northwest Hydraulic Plan (PLHINO) was being promoted for the Pacific coast, a project designed to transfer large quantities of water northward from the middle part of the state of Nayarit, where rainfall is three times greater than the south of the state Sonora, and increase the land under cultivation in the states of Nayarit, Sinaloa, and Sonora by a million hectares. The PLHINO and NAWAPA would be linked via one of the three branches of the NAWAPA project that reaches the Agua Prieta River Basin, which is a tributary of the Yaqui River on the Sonora border. Thus, the two hydraulic projects would be connected in a single water management system, and the treaties would not be settling conflicts over insufficient water, but would manage the distribution of the new, abundant resources available. (See the map of proposed North American water projects.)

A New Platform for Economic Growth

As the Mexican government official of the López Mateos presidency recognized back in the 1960s: there is no technological or scientific constraint preventing Mexico and the United States from carrying out these water and energy management projects, and thereby defining a new platform for economic growth centered on the requirements of helping to alleviate hunger in the world by significantly increasing the production of basic grains.

The current government of Mexico, and the governors of the states of the Mexican Pacific coast, must raise this discussion with the government of the United States and they must present it to the world. Especially to nations like China, whose commitment to the construction of hydraulic infrastructure has earned them world leadership. Mexico must take advantage of the spirit of openness of the Chinese government defined in its world program known as the Belt and Road Initiative, and bring to the table the importance of stimulating the economy of Mexico’s Pacific coast, especially given the great food potential of this region. This would be a win-win relationship: Mexico needs Chinese technology for the construction of the PLHINO, and China could make use of a large part of the food that could be produced with this project.

The main threat is not climate change. We are threatened by the custodians of a bankrupt international financial system, who would use climate terror to impose an economy based on money and speculation. That is the real threat to humanity and to our nations.