Circulate a Common Interest Development Program for Afghanistan Right Away 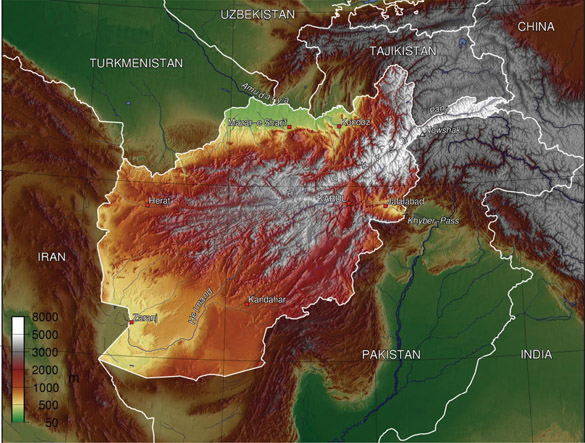 CC
Afghanistan lies between Iran and Pakistan, and in the north it borders on three of the five Central Asian nations and China.

July 31—Today the Schiller Institute brought together, in a five-hour intense discussion at an international virtual conference, diplomats, and experts from many nations, including Afghanistan, Russia, China, Pakistan, the United States, Italy, South Africa, Mexico, and others, on the theme: “Afghanistan: A Turning Point in History After the Failed Regime-Change Era.”

Helga Zepp-LaRouche (Germany), Founder and Chairman of the Schiller Institute, who has been leading a process of institutional and informal dialogue for the past 18 months, said at the conclusion of today’s event, that we now “have a perspective of where to go.” The priority is “to put development on the table, which will be difficult to refuse” by anyone, and to give all the support possible to make it happen. The last speaker of the day, Hussein Askary (Sweden/Iraq), Southwest Asia Coordinator for the Schiller Institute, forcefully put forth that we must “make development the first item” in any talks, not the last. He warned, “Keep the warlords and the British out!” Askary’s presentation, which covered concrete aspects of development, was titled, “Put Afghanistan on the Belt and Road to Peace.”

The event was opened by Moderator Dennis Speed (USA), who said that the deliberations would change the usual conception of war or peace, to partake of the diplomacy of formulating policies for mutual understanding and development. He included a video excerpt from a 1985 speech by the late statesman-economist Lyndon LaRouche making the point, with reference to President Abraham Lincoln’s record, that the power of infrastructure transforms an economy. Zepp-LaRouche’s opening remarks stressed that we are at a special moment in history, where geopolitical confrontation must be ended, and a new paradigm begun—not only for Eurasian integration and prosperity, but for universal history. She showed a beautiful “Golden Mask” artifact in making a point of the 5,000-year history of the Central Asian region.

Playing a lead role in the discussion from beginning to end was Professor Pino Arlacchi (Italy), who participated from Italy. Currently a Sociology Professor at the University of Sassari, he was Executive Director of the UN Office for Drug Control and Crime Prevention (1997-2002) and former European Parliament Rapporteur on Afghanistan. His subject was, “Eradicate Opium in Afghanistan, Develop Modern Agriculture, Build the Nation, Now,” describing his original plan, which by 2001 had nearly eliminated opium poppy growing in Afghanistan, but which then was reversed under the ensuing years from 2001 of U.S. and NATO military operations.

Arlacchi again proposed a plan in 2010, which was thwarted by the EU, Britain, and the United States. Today, Afghanistan is the source of over 80% of the world’s opium. Arlacchi laid out what can and must be done today. The needed approach uses alternative agriculture—supporting farmers to switch to other crops, and similar realistic methods. Arlacchi stressed how relatively inexpensive this is, given the huge leverage by the drug cartels. Farmers in Afghanistan might get $300 to 350 million for their opium crop, which then is worth $20 billion to organized crime in Europe. There are many alternative crops of great use and value, for example saffron.

The diplomats presented a sweeping picture of the present situation. Ambassador Hassan Shoroosh, Afghanistan’s ambassador to Canada, spoke from Ottawa, saying that there is a “new chapter of partnership” ahead, which must be worked out. His talk was, “The Way Forward for Afghanistan.” He said that his country is “positioned to serve as a land-bridge” in Eurasia, and reviewed in detail various transportation corridors, from the Lapis Lazuli Corridor to the Five Nations Railway Corridor.

Ambassador Anna Evstigneeva (Russia) spoke from New York City, where she is Deputy Permanent Representative at the Mission of the Russian Federation to the UN. Her presentation was titled, “Russia’s Outlook for Afghanistan and Eurasia.” She stressed that the goal is stability, and that there is no military solution. There are important frameworks among the neighbors in the region, including the Collective Security Treaty Organization (CSTO) and the Shanghai Cooperation Organization (SCO), as well as bilateral relations. There is a special role for the “extended troika,” which has been in place for many years. There are meetings coming up in the near future. Transport and other infrastructure are of great significance, she emphasized.

Dr. Wang Jin (China), Fellow at The Charhar Institute, spoke on the topic, “Afghanistan and the Belt and Road Initiative.” He presented four key aspects of China’s concerns: (1) that there be no “spillover” impacts of instability; (2) that there is a future of advancement for Afghanistan; (3) that extremism and terrorism do not gain ground; and (4) that China and Afghanistan have positive ties.

From Pakistan, Mr. Hassan Daud Butt, the CEO of the Khyber Pakhtunkhwa Board of Investment & Trade, spoke. He pointed out that Afghanistan is one of “the least integrated” economically in the Central and South Asian region, after these decades of strife. He talked about the great “economic spillover” that will ensue, with Pakistan leveraging its position and resources to become a logistical hub and extending benefits to Afghanistan through the Belt and Road flagship project, the China-Pakistan Economic Corridor (CPEC), and through the BRI. We must have “the spirit of the ancient Silk Road” again, he said, calling for more seminars on this, involving scholars, chambers of commerce and others.

From the United States, Ray McGovern spoke. He is a former analyst at the U.S. Central Intelligence Agency, and co-founder of the Veteran Intelligence Professionals for Sanity (VIPS). Addressing the topic, “The Real Interest of the United States in Asia,” he made many strong points, including that there must be “accountability” for the string of commanders who lied about what the U.S. was doing in Afghanistan, also in Iraq and elsewhere. He dramatically pointed out that there weren’t even competent “situation estimates” that should have been done, about terrain, weather, LOCS (lines of communications and supplies), and other standard assessments of what the U.S. is doing in places. In 2010, U.S. Navy logistics was paying $400 a gallon to put gas in the tanks of military vehicles in Afghanistan! He hit hard at the racism involved in presuming you can do anything, anywhere; he quoted Rudyard Kipling.

Many others were involved in the two question and answer discussions, with important exchanges over key topics. For example, Earl Rasmussen, Vice President of the Eurasian Society, raised the point of the necessity to build trust. Dr. Stephen Fischer, an American physician, reported on a year he spent in public health in Afghanistan, working with a provincial reconstruction team. Zepp-LaRouche stressed many times that in the context of the prolonged pandemic, it is imperative that we move in Afghanistan, and everywhere, for public health and modern medical care infrastructure. Dr. Walter Faggett and Maj. Gen. Peter Clegg (ret.), both with the Committee for the Coincidence of Opposites, were able to join the first Q&A discussion. Alaha Ahrar, CEO of the “Kindness Sharing Project,” called in from Virginia to ask what would happen to the gains women had made in Afghanistan, if the Taliban should take power.

Ambassador Anna Evstigneeva made a concluding point, that it is “important to rise above geopolitics.” She said that in Russia, “at all levels, including President Putin,” we are ready for cooperation.” Helga Zepp-LaRouche called on the panelists, and anyone in the viewing audience, to contribute to the development program perspective under discussion, and mobilize. Professor Arlacchi, who has a new book out, Against Fear: Violence Is Diminishing: The True Threats to World Peace (in Italian), gave parting words that, “peace is stronger than war. Let’s be more courageous. Not a victim of huge deceptions.” The full conference is archived for viewing (a partial transcript appears in this issue). Now is the time to join the Schiller Institute.

The entire conference can be watched here.