Russia’s Outlook for Afghanistan and Eurasia

Ambassador Anna Evstigneeva is the Deputy Permanent Representative of the Mission of the Russian Federation to the United Nations. This is an edited transcript of her address to the July 31, 2021 conference of the Schiller Institute, “Afghanistan: A Turning Point in History After the Failed Regime-Change Era.” 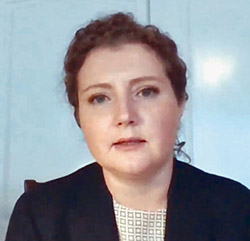 Thank you very much for inviting me to this event. It’s the first time that I’m participating in events organized by the Schiller Institute. I really value the discussion, and I’m very inspired by many speakers before me. The statements have already enriched me on a wide range of issues.

The issue under consideration today, the situation in Afghanistan and in the region, is truly very pertinent and urgent, as we see what’s going on in Afghanistan right now. We as Russians and also our partners and allies in the region are very concerned about the developments there. The level of violence is very high, and everyone is concerned about the possible spillover of the situation. But, I’m not even trying to say how concerned the Afghan people are—they have had the worst suffering for so long. Unfortunately, the peace process is now stalled. It’s a major problem which I will touch upon later.

I want to highlight several points that are related to our discussion today. The first one is what everyone is talking about right now, that the U.S. and its allies are leaving Afghanistan—actually, they have already left.

The U.S. President has said that Americans are leaving because they have fully accomplished their mission, and they are bringing troops home after 20 years. I assume that he wanted to give a positive picture, a positive side of it, and put it in a positive way. But I believe that there shouldn’t be any wishful thinking here, or self-deception. After the two decades of military presence in Afghanistan, the result was not reached, there is no victory there, and the mission of the U.S. has failed. Many experts and analysts and even politicians in the United States share this view.

As a reality, we see now that the reasons why the U.S. came to Afghanistan still exist; the terrorism is still there. After all this 20 years, ISIL and al-Qaeda have just enhanced their influence and strengthened their positions in the country and the drug problem is not resolved. It continues to remain the biggest challenge, not only for the country itself, but also for the region and beyond. Here I value the statement made by Mr. Arlacchi that portrayed the situation on drug production quite well.

As we know as well, the Afghan National Defense and Security Forces, that despite their equipment and resources and the training provided, they failed to defeat the Taliban.

The U.S. and NATO withdrew. And this creates a lot of concerns. But let me be clear—that doesn’t mean that the withdrawal of troops should mean that the responsibility and the burden should now be passed to other countries’ shoulders. We have heard a lot recently that the U.S. plans to relocate its military facilities to Central Asia and some other countries of the region, as an option to provide over-the-horizon support to Afghan forces. We do not believe that a U.S. military presence in Central Asia will be helpful for regional security, and we hope that those countries understand what kind of risks they might face if they agree on this presence, or especially, that some military actions might be made from their territories. We have already sent all necessary signals to our partners and allies at different levels, and we hope that they hear us.

We are cooperating very closely with our Central Asian neighbors. As I said already, we are concerned about any spread of the situation in the entire region. And we continue to cooperate within our regional organizations in the region—CSTO (Collective Security Treaty Organization) and the Shanghai Cooperation Organization—to find ways how to deal with the situation. And of course, bilaterally with our partners in Central Asia: we work at how to neutralize the threats and how to avoid escalation, how to counter the spread of radicalism through the borders. A matter of special attention is at the Tajik-Afghan border. There were several meetings—in a row—recently in the region at different levels, at the ministerial level, at the level of Ministers of Foreign Affairs, and Ministers of Defense. It’s definitely very important and is bearing fruit.

As many speakers said before me, it’s fundamental to be very clear and understand well what should be done now. We, of course, can complain about the failures and unsuccessful politics of the past, but it’s also important that we look to the future and see what we all can do to reach the goal of a stable and prosperous and peaceful Afghanistan. Because this is the thing that is in the interest of all, first of all the Afghan people, regional countries, Russia, and everyone else who cares.

And everyone agrees, especially now, that there is no military solution in Afghanistan, as many stakeholders have repeated, though not always in public. But it’s clear that so far, at this very moment, the situation is developing on a military path. But even if any of the major sides—the government of Afghanistan and the Taliban, which are there —wins, it doesn’t mean that we will reach the goal of stability in Afghanistan. A civil war will proceed.

In our view, and we say it all the time and are very consistent in the position: substantive talks are urgently needed. And the aim is to find an agreement on the sharing of power in Afghanistan, on future governance in Afghanistan that will encompass and bring together all the political and ethnic forces of the country. In our view, it’s fundamental that the solution be found by Afghans themselves, that they agree, and they bear the responsibility that it succeeds.

There is always the temptation, especially on behalf of some our partners—not regional partners—to interfere and to dictate and prescribe some solutions, and they call this “support of the international community.” But it’s not the case and sometimes it’s not helpful. The substantive talks should restart, and we all should work faithfully to help them succeed.

There is definitely a rivalry, probably even especially at this moment about the forums, about the countries that have influence on the parties, and where to hold talks, and etc., etc. We saw numerous examples in the recent past. But it’s very important that it’s not about bringing someone you like most, or you have your people in control. We have to help Afghans to find a sustainable solution, and a sustainable formula that will work in the long term. In this regard, we continue to work with all sides—with the government, with the Taliban movement, as well as other communities that have to have their share in the future of Afghanistan and will play a role. We have been holding meetings with both parties for quite a long time, and recently in July in Moscow.

At this present moment—we worked hard to form this extended troika for so many years, and our Special Representative in Kabul invested much time and effort himself to make it effective as the troika plus Pakistan, that is the troika of the United States, China and Russia, plus Pakistan—this group is playing a very important role in moving forward the process. And we do not rule out that we will convene the next meetings in the near future. I believe that these countries play, and will play, a fundamental role to support the intra-Afghan talks. But there are also other players in the region, India, Iran of course, and the Central Asian states that also can help. For this, we also have our forum that encompasses everyone; it’s the “Moscow Format.” We are not pushing to use only this format, but there is a sense that we will end up with this format, to help, because it’s really inclusive, in terms of who plays a role and should play a role to support this process.

Many speakers before me emphasized the importance of regional cooperation on economics, transport, and infrastructure. We find all of it very important to talk about. There were many conferences and meetings that were held recently, and we participated actively in these discussions. But it’s very important to understand, as well, that we will be talking about and supporting it endlessly without clear results unless we have a stable and prosperous Afghanistan that can really be included on an equal basis, and effectively in this cooperation. Unfortunately, so far, the situation that we see in Afghanistan is an obstacle for developing effective partnerships here.