The Way Forward for Afghanistan

Hassan Shoroosh is the Ambassador of the Islamic Republic of Afghanistan to Canada. This is an edited transcript of his address to the July 31, 2021 conference of the Schiller Institute, “Afghanistan: A Turning Point in History After the Failed Regime-Change Era.” Subheads have been added. 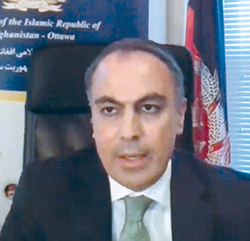 Greetings from Ottawa. It is a pleasure to be among this distinguished group of experts, and I wish to thank the Schiller Institute for hosting this very important conversation on Afghanistan and regional engagement.

Afghanistan and countries in the surrounding regions have shared historical ties over many centuries. We continue to share common interests and objectives and deepening connectivity, expanding trade and promoting regional cooperation in our wider region.

Following a prolonged gap over the recent history, which turned Afghanistan into a missing link in regional and inter-regional trade and transport networks, Afghanistan has made strides over the past two decades to revive its historical role as an important crossroads along the ancient Silk Road.

Today’s Afghanistan is very much well-positioned to serve as a land bridge facilitating the flow of energy, goods, services, data, and knowledge at the wider continental level. As we have long argued, Afghanistan is one of the few countries that can offer economic opportunities of a continental nature.

Providing some of the shortest and most cost-effective routes for oil and connectivity in Central Asia and South Asia, Afghanistan is an important partner and stakeholder in many important mega-energy projects, such as the TAPI (Turkmenistan-Afghanistan-Pakistan-India) gas pipeline project, between Turkmenistan, Afghanistan, Pakistan, and India; and the CASA-1000 (Central Asia and South Asia) electricity transmission line between the Kyrgyz republic, Tajikistan, Afghanistan, and Pakistan. Both projects have witnessed considerable progress over the past few years.

Afghanistan’s centrality therefore, in our view, remains key in both intra-corridor and inter-corridor connectivity, at both regional and continental levels, including in connecting China to the Middle East, the Caucasus, and Europe under the Belt and Road Initiative.

Our Vision for Tomorrow

Our vision is basically to help forge economic corridors—encompassing pipelines, electricity transmission lines, fiber optic cables, as well as roads and railways along some of these routes. In light of the predictions that Central, South, and Southwest Asia will become a central, global dynamism by 2030, the role of such economic corridors is becoming increasingly important, especially in terms of the opportunities for job creation, income generation, and trade expansion that they will offer.

Afghanistan is also leading two prominent regional cooperation frameworks, namely the Regional Economic Cooperation Conference on Afghanistan, RECCA, and the Heart of Asia Istanbul Process, which have experienced an increasing number of participating and supporting countries and organizations over the past few years.

RECCA has focussed on a group of viable and much-needed regional investment projects in very important areas such as energy, transport networks, trade and transit facilitation, communications, business-to-business partnership, and labor support, that are capable of generating economic multiplier effects in Afghanistan and the wider Eurasian region.

The Heart of Asia Istanbul Process has also played an increasingly effective role in facilitating dialogue and trans-building across the region, which remains essential in promoting economic cooperation in the Heart of Asia Region.

In addition to this, Afghanistan is one of the very few countries that is engaged under a different status in almost all regional cooperation platforms that operate across the wider Eurasian region. This has provided Afghanistan with an opportunity to actively engage in policy coordination among these organizations, including with respect to the Afghan component of the activities. Afghanistan is thus situated as a converging point in the wider Eurasian region and remains a crucial partner for building a common economic future for the peoples across this vast region.

However, our collective efforts and achievements over the past two decades in deepening connectivity and expanding trade and regional cooperation in general are now being threatened by a narrative of violence and destruction that apparently rejects our common narrative of cooperation, friendship, and partnership.

Following the pull-out decision announced by the United States and other international allies, the Taliban have waged a massive campaign of violence alongside other terrorist groups, against the government and our people, which has resulted in widespread violations of human rights, a high number of military and civilian casualties—including among women and children—a dire humanitarian situation, and significant damage to public infrastructure.

An alarming feature of this massive campaign of violence by the Taliban is the engagement of foreign terrorist groups. According to the latest report by the UN Analytical Support and Sanctions Monitoring Team, which was released on July 21st, the Taliban have maintained their ties with al-Qaeda and other terrorist groups. Al-Qaeda and many other groups from the wider region, from Pakistan, from the wider Central Asia and Middle East, are currently fighting alongside the Taliban. The Taliban also continues to benefit from criminal networks, especially now, given the fact that there is a growing link between terrorism, narcotics, and organized crime in our wider region.

The existence of these terrorist groups alongside the Taliban, and the escalation of violence, in our view, will have dangerous spillover effects in the region and many terrorist groups have already started celebrating the territorial gains by the Taliban over the past few weeks.

On our part, while our security and defense forces continue to show both courage and dedication in defending our country, the government remains committed to the peace process, and has acted in good faith to take the peace process forward.

The Taliban, however, have not lived up to any of their commitments under the Doha Agreement with the United States. As I just explained, the Taliban have maintained their ties with al-Qaeda and other terrorist groups. They have not reduced the violence, with no indication of a commitment to a ceasefire, especially now, in light of a very challenging third wave of the pandemic in Afghanistan, and also a dire humanitarian situation. The Taliban’s distorted interpretation of Islamic Sharia, which is largely rejected by our people, has not changed. As evidence shows, and as their behavior reflects, especially over the past few weeks, they are pursuing their original ambition for the return of the Islamic Emirate with no difference from the 1990s, and with no sign of change and reform.

The Taliban must understand that the world will not tolerate seizure of power by force. They have to feel our joint commitment to sustaining and building on the efforts and achievements we have made together over the past two decades, especially when it comes to regional connectivity and economic cooperation in the wider region.

The Taliban must feel a real pressure and must understand that they cannot use any longer the peace process as a tool for legitimization and that the only way forward is their integration in an inclusive and democratic society. The end state of the peace process for us is a sovereign, united, democratic, peaceful, and connected Afghanistan, at peace with itself, with the region, and with the world; a country that is capable of preserving and expanding the gains of the past few years; a country that would serve as a regional and continental help for trade and transit; an important driver of economic growth and development and stability in the wider region and beyond.

Recognizing the link between peace and development, the government of Afghanistan is committed to obtaining this end state through a coherent framework of peace building, state building, and market building under our new development and peace strategy. This is an end state that will guarantee peace and prosperity, not only in Afghanistan, but also in the wider region.

While this end state has been endorsed both regionally and internationally, we believe that this consensus needs to be put into solid, collective actions. It requires sustained international engagement and sincere regional cooperation, including in countering terrorism, narcotics, and organized crime as our common threats. With our collective efforts during this very difficult time, especially now in Afghanistan, we are deciding about the future of our shared interests and our common objectives.

So, with this, I stop here, and I very much look forward to our discussion. Thank you so much.