This article appears in the August 20, 2021 issue of Executive Intelligence Review.

Yekaterina Shamayeva holds an advanced degree in engineering, and has been a Senior Lecturer at various academic institutions. She has worked closely with a circle of scientists who were personally associated with the late Pobisk Kuznetsov, the visionary Russian scientist and expert in industrial planning and management, who became Lyndon LaRouche’s friend and hosted his first visit to Moscow in 1994. This is the translation of her presentation to the August 14, 2021 LaRouche Legacy Foundation seminar, “On the 50th Anniversary of LaRouche’s Stunning Forecast of August 15, 1971: So, Are You Finally Willing To Learn Economics?” 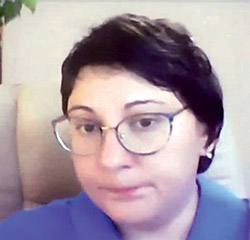 Good day, dear colleagues and friends. Allow me to begin with two quotations. The first comes from that outstanding person, Lyndon LaRouche, and consists of excerpts from two of his works:

The crucial fact upon which all sound economic decisions are now premised, is … that the presently reigning financial and monetary institutions, are … hopelessly and profoundly bankrupt…. [From a 2000 article]

The second quotation is from Lyndon LaRouche’s colleague from the USSR and Russia, the encyclopedic scholar Pobisk Kuznetsov:

A transition to sustainable development requires that economic science not be isolated from physics and technology, but that they undergo a new synthesis. The conflicts that arise are a struggle for sources of energy.

The ideas of Lyndon LaRouche and Pobisk Kuznetsov bring together their fundamental views and the requirement for value to be linked to natural-science processes and measurements; in the words of Pobisk Kuznetsov, human activity needs to be brought into accordance with the laws of Nature and their projection—the laws of social development (in terms of power, rising labor productivity, and a budget of social time).

Turning to the topic of my remarks: sustainable development.

They all share one flaw: the absence of a measurable connection among the various aspects and, as a first consequence of that, the impossibility of seeing a coherent picture; and, a second consequence, the impossibility of reliably designing and managing sustainable development. This problem exists not only for the concept of sustainable development.

Today the basic concepts and laws of various disciplines are incommensurate. As a result, they are not interconnected (or are interconnected in some undetermined way), which gives rise to a mental failure to understand the actual connections within the real world, and creates an illusion of [their] independence, a world of false values, aggravates the “professional failure to understand” actual problems, and forces people to make mistakes, leading to a global crisis. It is fundamentally wrong to view society’s sustainable development separately from the laws of Nature, since that strips the idea of any lawful basis.

The central idea in the works of P.G. Kuznetsov is the law for the development of life as a cosmic and planetary process, as the fundamental law of all open socioeconomic systems. The collection of his scientific works, published in 2016, indeed is titled The Science of the Development of Life. (To date, there are five volumes in Russian, published under this title.)

The development and application of P.G. Kuznetsov’s ideas gave economic science a new method for formulating knowledge on the basis of natural science. The scientific works of Pobisk Kuznetsov were based on the discoveries of S.A. Podolynsky, V.I. Vernadsky, E.S. Bauer and other scientists.

In the course of many years of fundamental and applied work, the P.G. Kuznetsov Scientific School was formed. It is represented by Boris Yevgenyevich Bolshakov, Victor Igorevich Belyakov-Bodin, Victor Mikhailovich Kapustian, Andrei Yevgenyevich Petrov, Vyacheslav Stepanovich Chesnokov, Alexander Yevgenyevich Armensky and others, too numerous to list in this short report.

The Law of Nature

As of today, this scientific school has shown that underlying the generally accepted principle of sustainable development is a general law of Nature—the law of conservation of power or energy flux (the discovery and application of which is linked with the names of Lagrange, Maxwell, and P.G. Kuznetsov) and its projection—the principle of “conservation of the development of living systems,” described by V.I. Vernadsky and E.S. Bauer. These principles postulate, for development, a non-decreasing growth in the efficiency of utilizing society’s net capacity [useable power] (its resources), interacting with the environment.

On the basis of these fundamental laws and principles, a system of models has been developed (on the national level and for regions), which makes it possible to design and manage changes in society on a lawful basis, viewing sustainable development as a projection of the general laws of Nature onto particular systems of coordinates. This is especially important in the difficult conditions of the world today.

It is no surprise that the ideas of Lyndon LaRouche and Pobisk Kuznetsov continue to animate the minds of scientists, educators and politicians, because they provide a fundamental organizational basis for a way out of the crisis—for preserving, and for the possibility of developing, Mankind. (Lyndon LaRouche and his team have produced strong practical solutions, and organizational and political recommendations.)

There has been cooperation between these two schools, in response to requests and needs, and in the framework of scientific research programs: there have been meetings (such as the discussion between Lyndon LaRouche and Pobisk Kuznetsov), seminars, and scientific conferences. From 2013 on, presentations by Lyndon LaRouche and his associates became a regular part of the annual International Conference on Fundamental and Applied Problems of Sustainable Development in the System of Nature-Society-Man.

Their presentations (on “The World Crisis and Sustainable Development: Fundamental Contradictions in World Development”; “Prospects for Preserving the Development of Mankind in the Face of Global Challenges and Threats”; “The Strategic Significance of the New Silk Road”; and others) were warmly welcomed by the Russian scientific community and youth.

The purpose of this sub-department was to train people in fundamental and applied knowledge for the design and management of development on the basis of the natural-science laws of development of the system “nature-society-man” and skills training in the use of methods based on the general laws of Nature, expressed in universal spatio-temporal (LT) parameters. The unique works in this regard are those of Robert Bartini, which were synthesized with the works of Pobisk Kuznetsov.

In the course of their studies, students are introduced to scientific heritage and its applications, including the foundations of physical economy and the ideas of Lyndon LaRouche. The director of this educational program, which was called “Design and Management of Sustainable Development,” was Boris Yevgenyevich Bolshakov, who for more than 20 years engaged in teaching, scientific research and educational work with the public, conveying these unique scientific ideas to younger generations. He also made, and published, several outstanding discoveries, such as his unique work The Law of Nature, or How Space-Time Operates, which presented the fundamentals of LT-physics, LT-chemistry, and economics.[fn_1]

In 2018, B.Ye. Bolshakov passed away, and the educational work he had directed underwent big changes. But today there is a unique organizational tool for the development of these ideas: a public organization called the Space Society, under whose umbrella various educational, engineering and organizational projects are being done, including ones related to the above-mentioned scientific schools.

I represent the area concerned with designing regional development in terms of natural-science measuring tools, derived from the law of conservation of power. This involves multi-country applied models in terms of power, by which it is possible to evaluate the equivalence of exchange between countries. There are also interregional models, within a country, for evaluating living standards and quality of life in terms of power. We also model technological trends and possibilities for development, which requires formalizing and evaluating innovations using both value and natural-science measuring tools.

I work with several youth groups on developing criteria and evaluating the budget of social time, both for the country and for macro-regions, as well as technologies for organizational planning and management based on the SCALAR system. (Its authors were P.G. Kuznetsov and the Management Systems for Systems Developers Laboratory (LaSURS) at the Moscow State University of Instrument-Making and Informatics.)

Thus, we have a developed theory, methodology and technology for the design and management of sustainable development of systems at various levels, all based on universal natural-science parameters. What’s especially needed today, are new methodological guidelines, practical solutions, and applications, as a synthesis of the fundamental ideas of these two scientific schools.

I would like to take this opportunity to thank the organizers of this seminar and representatives of Lyndon LaRouche’s school for inviting me, and for our ongoing collaboration and responses to our work.

Dear colleagues and friends, thank you for your attention to my report.

[fn_1] The LT table of physical magnitudes and relationships (L stands for “length” and T for “time”) was invented by Roberto Oros di Bartini (1897-1974), a famously innovative Italian-born Soviet aircraft designer. His Russian collaborator Pobisk Kuznetsov further developed the method during his work at the Scientific Council on Planning Large-Scale Systems on the Basis of Physically Measurable Magnitudes. [back to text for fn_1]