LaRouche in the Universities

Carolina Domínguez, a long-time leader of the LaRouche youth movement in Mexico was joined in this presentation by three young intellectuals from Mexico and Colombia. This is an edited transcript of the English translation of her remarks to the second panel, “Earth’s Next Fifty Years,” of the August 14, 2021 LaRouche Legacy Foundation seminar, “On the 50th Anniversary of LaRouche’s Stunning Forecast of August 15, 1971: So, Are You Finally Willing To Learn Economics?” 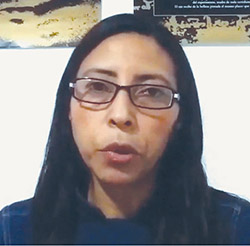 Welcome to this international conference. I am Carolina Dominguez from the Schiller Institute in Mexico. I am going to share with you the impact that the ideas of Lyndon LaRouche have had on the minds of many citizens and in particular, of young people. For this, I want to make a few comments about some of the dynamics that exist in the universities. Forgive me for speaking about this in the first person.

Many of my friends and I were looking for answers at a certain point, because our university professors said that nothing remained to be discovered anymore, that everything had already been done, even if you got a master’s degree or a doctorate.

What we felt was that the only thing left to do was to settle for sort of studying what others, who were born geniuses, had discovered, but that we, poor students, were not going to discover anything. Not us! Let’s talk instead about what you like, about parties and people.” But little by little, there was an emotional change that caught up with us, that nobody spoke about. Nobody said anything, but we got caught up in the environment. Suddenly, without realizing it, we gave up. We never touched the subject again.

But one day at the university, I came across a group that had a banner about the economic crisis, and another one about science. And, out of curiosity, I approached them. Because my ignorance was such that I did not even know that there was an economic crisis. They gave me an article by a certain Lyndon LaRouche, whom I of course had not heard of. They had several articles about science, economics, art, music. And since I was studying science, I wasn’t interested in other subjects. Again, my ignorance was on display.

When I started reading the document by Lyndon LaRouche, it was a shock. First of all, I thought: Where are the commas? And then I thought, “Why don’t I know 50% of the authors that LaRouche mentions?” And above all, “Why don’t I understand 70% of what he says?” And then LaRouche provided an answer to the question that my friends and I had forgotten.

There was an idea that I did understand, and that stuck in my mind. The idea that human beings have a willful capacity; that human beings have the potential and the ability to develop their mind and soul and that this is the greatest power that an individual can achieve. And more than that, that the universe works based on efficient laws and that these laws or physical principles, as LaRouche calls them, are knowable or understandable to the mind of man, because that’s what we were created for. And that if you make an effort, any citizen (and this was the shock), any citizen can make a discovery or rediscovery in science, art, etc. And that this improves the well-being of the population.

This hit me hard. From there, LaRouche showed me that this is true freedom, that this is power, the power of ideas. The power to apply these discoveries so that our people live better.

So that’s where this campaign for “LaRouche in the Universities” comes from. Because the process of shock, or crisis, generated by studying LaRouche must become a constant dynamic, a social dynamic. As LaRouche said: It’s good to have and generate in yourself and other individuals, a crisis of this type because it makes you honest; it makes you stop faking what you are not and what you don’t know. And it leads you to look at that crisis as a challenge, as a driver to conquer that uncertainty through knowledge that leads you to know how to solve this painful crisis.

I want to share with you how LaRouche’s ideas have impacted young people in particular. And after watching these videos, I want us all to think about what happened to that passion to discover, that passion that we all have but that we keep locked up, because we think that it was not for us; that the power of ideas does not exist. LaRouche’s movement reminds us that we have that potential in that; and if you were saving that potential for a special moment, I want to tell you that that moment is now. Thank you. 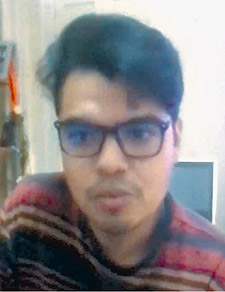 I’m José Luis García and I live in Mexico City. I’m a student working on a master’s degree in experimental biomedicine.

Before, I was aware of the fact that electricity is produced mostly by hydroelectric and thermoelectric plants and unfortunately rarely by thermonuclear plants. But I wasn’t fully aware that all human activities that we carry out depend directly, or indirectly, on the continuing production of energy, coming from a power grid that, to be precise, maintains not only the productive activity of a nation, of a civilization, but billions of human lives depend on it.

It’s precisely the concept of “energy flux density,” which translates into “relative population-density,” that can maintain this power grid. That concept became so clear to me, and that it can be applied at the cellular level. And it is precisely that ability of Mr. LaRouche to integrate various areas of knowledge and direct them to a single goal, which is the constant development of man’s creative capacity from which all existing and future sciences develop. 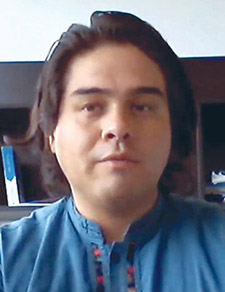 Good afternoon, I’m Eber Alejandro Medina Martínez. I studied economics at the University of Guadalajara and have worked professionally as a public policy analyst, teacher, and investment fund manager.

Like most economics and social science students, my training consisted of a curriculum centered on a mechanistic, hedonistic, and individualistic view of the economy and society. Of course, the majority of students did not understand this, and since the economics program focused on the management of monetary and financial aggregates, through econometric models and other kinds of statistical-mathematical sophistry, hundreds of students graduated with a wrong idea about the economy, society and human beings.

The counterweight to that curriculum were some classes on Marxism, diluted in subjects such as political economy, economic history, or the philosophical history of economics. One of these professors, a strange specimen among Marxists, introduced me to the reading of Plato’s Republic, which allowed me to begin to construct a general picture that explained society and the economy.

Sometime later, a fascinating book by an American philosopher came into my hands that spurred my thinking. His book So You Wish to Learn All About Economics was a crisis inducer and led to a radical break with my long-held economic assumptions. By discovering LaRouche’s concepts of infrastructure, work, technology and energy-flux density, my disquisitions became more potent and precise. I never saw the world in the same way again.

LaRouche’s intellectual legacy promotes a new human renaissance and a concept of man, society, politics, and the economy, which aims to prevent and overcome the destruction of national economies and entire peoples by the world health crisis or by a thermonuclear war between the current superpowers.

China and Russia are making positive progress in this situation; Latin America, Africa and Asia are carrying out scattered efforts. But it is still necessary for young people to assume the historical role of generational change, and position ourselves as the new creative force and the productive and intellectual power of the 21st century. 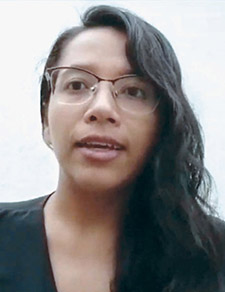 Hi, I’m Wendy González from Colombia, I work in territorial planning. Since last year I have approached the ideas of Lyndon LaRouche, which have had a profound impact on my way of conceiving and understanding the world. Lyndon proposes in physical economy that reality is intimately linked to the ideas that we have about it, and he opens a window of possibilities to transform the physical world, given the infinite creative capacity of the human mind, demonstrating that transforming the living conditions of billions of people is not a chimera. For this, it is necessary to transform our way of thinking, allowing the creative spirit of the universe to be manifest in all of us. In that way, we’ll be able to achieve and create dimensions of space-time that are still mysterious.

In this, the aesthetic education of the human being plays a special role, especially in classical music, because as Beethoven said, music is a much greater revelation than all philosophy and knowledge, and that revelation is what allows us to ground ourselves as human beings.

The ideas of Lyndon LaRouche have given me hope in these times of crisis of the Western civilizational project. And I consider it essential that these ideas be spread in the minds of young people, to understand ourselves in terms of economics, politics, and spiritually, and to guide us towards that transcending drive towards the good and love, which is inherent in human beings.