Lyndon LaRouche:
Development for All, and the New International Order

Dr. Kirk Meighoo, of Trinidad and Tobago, is the public relations officer of the United National Congress, the official opposition in Trinidad and Tobago and the Caribbean. His career has spanned politics, academia and media for three decades, including serving as an independent Senator. This is an edited transcript of his presentation to Panel 1, “On LaRouche’s Discovery,” of the August 14 LaRouche Legacy Foundation seminar, “On the 50th Anniversary of LaRouche’s Stunning Forecast of August 15, 1971: So, Are You Finally Willing To Learn Economics?” 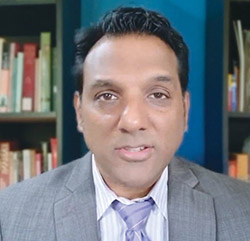 Hi! My name is Dr. Kirk Meighoo. I am the public relations officer of the United National Congress, the official opposition party in the Republic of Trinidad and Tobago in the Caribbean. I’m delighted to be here at this conference in honor of Lyndon LaRouche.

I’m going to speak on the topic today of “Lyndon LaRouche: Development for All, and the New International Economic Order.”

A Short History of the Caribbean and its Economists

In 1975 at the United Nations, Fred Wills, the Minister of Foreign Affairs from the Caribbean and South American country of Guyana, made a call for a new international economic order and an International Development Bank. While Fred Wills was an ally of the LaRouche movement, he also came from a tradition of Caribbean intellectual and political critique. Many from this tradition led their countries into independence in the 1960s, and some in the 1970s. The new international economic order had been embraced by many in the region, including the charismatic Prime Minister Michael Manley of Jamaica. This flowed from the experience of independence in the 1960s for the larger English speaking Caribbean countries—Jamaica in 1962, Trinidad later that year in ’62, Guyana and Barbados both in 1966.

Many young people however, at the time, were disillusioned by independence. The dreams they had were not fulfilled; the economic development that they envisaged was not occurring; the type of freedom and creativity they longed for was not forthcoming from the new independent political class. Indeed, the independence leaders were seen as perpetuating neo-colonialism or neo-imperialism, and political independence was seen as insufficient, or just the first step towards freedom and development.

Throughout the region, matters came to a head between 1968 and 1972, with Black power movements, trade union movements, and other protest movements sweeping up and down the islands. Some of these dissident movements came to power during the 1970s as well, while others became part of the official opposition. Our own political party emerged out of these struggles.

The new international economic order was embraced and advanced by these leaders, because they realized that formal independence did not mean prosperity and progress for their people. Caribbean economists like Lloyd Best, Clive Thomas, Havelock Brewster, and Latin American economists as well, started looking at structural and historical reasons as to why our countries remained poor. Analysts like Fernando Henrique Cardoso saw the terms of trade being rigged against the raw materials suppliers in developing countries. Theorists like Andre Gunder Frank spoke about the development of under-development and looked at the structural relationships between the center and the periphery, noting that under-development was a product of exploitative relationships.

This began to inform national and foreign policy of the more radicalized countries. Institutions like the “United Nations Conference on Trade and Development” [UNCTAD], or the “United Nations Economic Commission on Latin America” and the Caribbean [UNECLAC] were established by radical governments in Latin America and the Caribbean who wanted to deal with the structural problems of under-development in the global economy. Raw materials producers’ cartels were attempted on the model of OPEC in commodities such as bauxite, to have more control over the exploitative, manipulated, and rigged global markets. Reform of the IMF and World Bank, to include developing countries at the center, had been on the agenda for decades, but consistently rejected by Europe and the U.S.

With the rise of neo-liberalism in the 1980s and ’90s, and the massive debt crises which plagued many of these countries, that vision of the new international economic order faded, even within our countries where it was embraced.

As a young student, I learned about these theories at the University of Toronto. Later, during my master’s degree in Jamaica, I was taught by many of the advisors of these radical governments throughout the Caribbean, and by the thinkers behind these ideas. In the UK, where I read for my PhD, I worked with advisors to the British government, advisors to the Reagan Administration, and development policy experts who had decades of experience in the field, working with governments in the developing world, and also advising the U.K. government on development issues.

During this whole time, however, I had never heard the name of Lyndon LaRouche. But in the 2000s, I began to discover him through the magic of the internet. I discovered the vastness of his vision, and the 40-year involvement he had in this struggle. I saw how he worked with López Portillo in Mexico; Indira Gandhi in India; how he advocated for the industrialization of Africa and India since the 1970s, as opposed to third-class “appropriate” technology. He called for the establishment of an International Development Bank after the U.S. dollar was de-linked from gold, and fixed exchange rates were abandoned. And he came up with the phrase “New International Economic Order.”

I also saw the Fred Wills connection, and I realized that this part of history had been censored. Not even at the universities where I specialized in the subject of development studies were we taught about the theories of Lyndon LaRouche, which were not only crucial intellectually, but also practically, in terms of his political mobilization.

As I began to delve into his work, I read LaRouche articulate and promote the American System of Economy, which interestingly went back to Alexander Hamilton, who himself was born in the West Indies. LaRouche’s elaboration of the American System was fascinating to me personally, because my own intellectual mentor was one of Trinidad and Tobago’s and the Caribbean’s great intellectuals—Lloyd Best. One of his lasting intellectual contributions was the articulation of the plantation society and economy model, which articulated the imperial system under which the West Indies were exploited by the metropolitan countries and by local social and economic structures, and by which they remained shackled during independence, even though imperialism and colonialism had formally ended.

These theories were necessary complements to each other, to understand the system as a whole as it moved and developed through time and space. Best, himself, had begun to uncover these distinctive models before he died. But I later found them fully elaborated by Lyndon LaRouche. LaRouche’s analysis of the British Empire and the trans-Atlantic system is extremely important in terms of the perpetuation of under-development. The critique of the so-called free trade model of development and the focus on deep structural issues in the economy is crucial. The neo-liberal models which have dominated since the 1980s, need an effective economic counter argument and set of policies. LaRouche’s ideas must be central to that.

The rise of the BRICS—Brazil, Russia, India, China, and South Africa—should have naturally led to a reorganization of the world economy—and perhaps is doing so slowly—which would take into account the needs of the developing world much more centrally. The previous moves towards this, such as the formation of the Group of 77, or the Group of 20, to counterbalance the cabal of the G7, prefigured this. But while there has been some of this change occurring, and conflict brewing because of it, neo-liberalism has essentially prevailed as a dominant theory in practice and the BRICS has generally broken up.

LaRouche’s idea of the World Land-Bridge, science drivers, the enhancement of productive capacity, as opposed to financial speculation is crucial. The pandemic today and the policies of lockdown have destroyed global economic productive capacities throughout the world, which instead, have been replaced with a flood of printed money. This has been central to the massive increase in wealth inequality, historic economic contraction, and an obscene transfer of wealth from the poor to the rich. LaRouche’s championing of the World Land-Bridge, much of which was incorporated into the New Silk Road, is extremely important. The global Four Powers Agreement between the United States, India, China, and Russia, the reinstatement of Glass-Steagall and other measures, can only be adopted when one moves away from the entire discourse of neo-liberalism. Not only as a strategy, but also as an understanding of economics itself.

I commend the LaRouche Legacy Foundation for carrying on this mission, which is so crucial for the full realization of the potential and capacity of the human species on Earth, and in the universe itself. Thank you very much.