This article appears in the August 20, 2021 issue of Executive Intelligence Review.

On the 50th Anniversary of
LaRouche’s Stunning Forecast of August 15, 1971:

So, Are You Finally Willing
To Learn Economics?

We present here a selection of presentations from this two-panel seminar. Additional presentations will be published in coming issues of EIR. The full set of videos is available here.

Dennis Small moderated the first panel of the August 14, 2021 LaRouche Legacy Foundation seminar, “On the 50th Anniversary of LaRouche’s Stunning Forecast of August 15, 1971: So, Are You Finally Willing To Learn Economics?” He augmented his remarks with two video excerpts, the first being President Richard Nixon from August 15, 1971, and the second being Lyndon LaRouche from September 1, 2001. This is an edited transcript of the presentation. 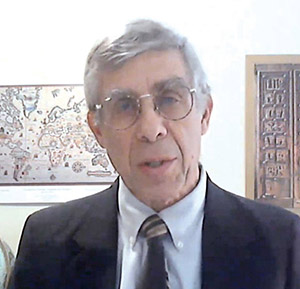 I’d like to welcome everyone to the first international seminar of the LaRouche Legacy Foundation on the 50th anniversary of Lyndon LaRouche’s stunning forecast of August 15, 1971. We meet today under the title, “So, Are You Finally Willing to Learn Economics?”

My name is Dennis Small from the Advisory Committee of the LaRouche Legacy Foundation. The LLF was founded in November 2019 at the initiative of Helga Zepp-LaRouche, just nine months after the passing of Mr. Lyndon LaRouche in February 2019: LaRouche, the great American statesman and economist. The stated mission of the LaRouche Legacy Foundation is to preserve and extend the monumental intellectual contributions of Mr. LaRouche in innumerable fields of knowledge and endeavor, in all areas of science, politics, and statecraft.

Our activities to date have already resulted in the publication of Volume I of The Collected Works of Lyndon LaRouche. There will be more volumes coming out shortly; we expect to publish Volume II this year.

In addition to that, we have embarked on the establishment of a digital archive of the prodigious amount of work that Mr. LaRouche produced, both in written form and in speeches, conferences, classes, and so on. This will be a digital library; it will be called The LaRouche Library. And we do hope to have available for the public the first collection on that LaRouche Library later this year.

In addition, we have launched a program of international seminars such as this one, to extend and debate and discuss out LaRouche’s activities in numerous areas. This will, of course, be the first of many such in the future.

The first panel this morning will take up LaRouche’s discovery in the field of physical economics. The second panel will explore the “Earth’s Next 50 Years.” We are honored to have with us today panelists from Germany, Russia, China, Slovakia, Ukraine, Brazil, Mexico, France, Trinidad and Tobago, Argentina, the Philippines, Colombia, and the United States. As well as messages of greetings from Peru and Japan. We have an audience which is international, and you will be hearing in the question-and-answer period from some of those individuals who choose to ask questions of the panelists today, which will follow at the end of the presentations. This seminar is being simultaneously interpreted into Spanish, French, German, and Russian.

We are motivated by science, and LaRouche’s unique discoveries in numerous fields. We are also motivated by the urgency of the political moment, because ideas such as LaRouche’s are urgently required to address the storm of international crises which are besetting mankind. From the pandemic, to an economic meltdown, a financial blow-out, the danger of geopolitical wars—possibly extending to nuclear warfare among the major superpowers. And all of these crises, in effect, can be traced to the systemic breakdown of the trans-Atlantic financial and economic system. This is a breakdown crisis which Mr. LaRouche not only foresaw and forecast, as you will hear in some detail today, but he also provided detailed programmatic solutions over the course of fifty years of endeavor.

Because of the nature of this crisis, and because of the urgency of Mr. LaRouche’s ideas being known and discussed internationally, we would like to underscore the famous statement made by the former President of Mexico, José López Portillo, when he said, in a public conference discussion with Helga Zepp-LaRouche in Mexico City, that “it is now necessary for the world to listen to the wise words of Lyndon LaRouche.” We would only add now that it is urgently necessary for the world to study the wise words of Lyndon LaRouche. And for that purpose, it is of course necessary to exonerate him and exonerate his ideas from the unjust and illegal incarceration to which Mr. LaRouche and others were subjected, in order to make sure that those ideas are in fact fully available.

August 15, 1971, was a turning point in modern history. It was a Sunday, and on that day, Richard Nixon—on the instructions of his advisors and Wall Street and the City of London—took to national television to announce the end of the Bretton Woods system of fixed exchange rates and more.

An historic video clip of President Nixon making that announcement was played:

Accordingly, I have directed the Secretary of the Treasury to take the action necessary to defend the dollar against the speculators.

I have directed Secretary Connally to suspend temporarily the convertibility of the dollar except in amounts and conditions determined to be in the interest of monetary stability and in the best interests of the United States....

In full cooperation with the International Monetary Fund and those who trade with us, we will press for the necessary reforms to set up an urgently needed new international monetary system. Stability and equal treatment is in everybody’s best interest. I am determined that the American dollar must never again be a hostage in the hands of international speculators....

The time has come for exchange rates to be set straight and for the major nations to compete as equals. There is no longer any need for the United States to compete with one hand tied beyond her back.

And now we will hear from the man who should have been President of the United States, Lyndon LaRouche, addressing an international audience at the September 1, 2001 conference of the Schiller Institute:

Lyndon LaRouche [video]: And, I found myself, more and more, as we got into the middle ’60s, standing alone. There was nobody there, to lead, not really lead. People called themselves leaders, but they were all fake. And I found myself standing alone. And I just said, “I’ve got to do something. I must do something.” So I did it. And some people in the room know, or have some experience with what I did.

Now, I was right. The first thing—I was a good economist, then, a very good one, probably the best, at least on performance. You look at the past, look at what I forecast, what I taught: I was better than anybody alive I know today—from that period, or even today. I was the best. So, I took my skills and knowledge, and I just intervened on campuses. And began, impromptu, educating young people wherever I could find them. And, out of that came a movement.

I did some more forecasting, and I was right. I have never made a forecast, which did not turn out exactly as I specified it. Never! I’ve been in forecasting, actually, for more than—now more than 40 years. I never made a mistake, in that. Well, I was also careful: I didn’t forecast when I wasn’t sure. Someone says, “Give me a prediction.” I say, “No, no, no. I’ll give you the ones I have. I don’t make these things up on demand. I’m not like a slot machine: You put a quarter in, you get a forecast out!”

1971: the collapse. What happened in the late ’60s? A series of monetary crises, leading to a breakdown of the Bretton Woods system as it now existed, unless certain changes were made. It happened exactly that way. 1967: The British pound-sterling crisis. January-February-March 1968: The dollar crisis. 1970: The Penn Central and Chrysler crisis. 1971: The collapse of the entire monetary system. 1975: A new wave of this. Then came the Carter Administration, which destroyed all regulation to speak of, destroyed everything in infrastructure upon which this country was based.

And, we’re suffering today, because of a collapse of infrastructure, which has been in progress for 30 years! For 30 years, the United States has had a negative investment in basic economic infrastructure: in transportation, in urban development, in power generation and distribution, in medical care, and so forth. We have been destroying ourselves as a nation, over 30 years—culturally and every other way. And, I found myself standing alone.

But, I found myself, as you know, largely standing alone, surrounded by a few friends and a few friendly souls, who would agree with me....

So, what do you live for? Do you live like an animal, to go out with a whimper? Or do you live like a human being, knowing that you are doing something, you are developing, in yourself, something which will be transmitted to future generations, to make humanity better in the future? You no longer are a little person, living in a little neighborhood, with a little mind, with little ambitions and little interests; you’ve suddenly become a very big person, because you have the minds of some of the greatest people in history before you—live in you! And your replication of exactly their act of discovery. You do things with pride!

They’ll say, “He was right! This was a great discovery. We’ve got to use it for mankind’s benefit.” You say, “I’ve got to do something to make the future better, for those who come after us. Then, I can die with a smile on my face. Because I’ve lived well. I’ve lived at peace with the greatest people of the past. Or, at least, some of them. And I can live at peace, with joy, in the people in the future. I will live forever, in this process.” That’s what it is to be human.

And when you think like that, and look at other people like that, you don’t have a problem. You may have problems, but that’s fun! Because, if problems force you to attack and solve problems, whether as an individual, or in concert with others, that is fun.

And so, we have our charge today, which is to have fun!

Our panel this morning consists of Helga Zepp-LaRouche from Germany, Ding Yifan of China, Józef Mikloško of the Slovak Republic, Dr. Natalia Vitrenko of Ukraine, Dr. Kirk Meighoo of Trinidad and Tobago, Yekaterina Fyodorovna Shamayeva of Russia, Paul Gallagher of the United States, and then a presentation of LaRouche on the world stage. This will be followed by a question-and-answer period in which we encourage all listeners from every corner of the planet to send in their questions to questions@larouchelegacyfoundation.org in all languages.