Saving Mankind Is a ‘Mission-Possible’

Natalia Vitrenko is a Doctor of Economic Sciences, and is Chairman of the Progressive Socialist Party of Ukraine. She served as a People’s Deputy in the Verkhovna Rada (the national parliament of Ukraine) from 1995-2002. This is an edited transcript of her presentation to the August 14, 2021 LaRouche Legacy Foundation seminar, “On the 50th Anniversary of LaRouche’s Stunning Forecast of August 15, 1971: So, Are You Finally Ready To Learn Economics” 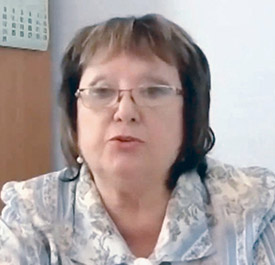 I have titled my presentation “Saving Mankind Is a ‘Mission-Possible’” because I deeply believe that, if at last three conditions are met, tragedy for mankind can be averted. Those conditions are the following: a new Bretton Woods system, global banking reform, and providing mankind with powerful sources of energy.

The world community, just as the great American scholar Lyndon LaRouche forecast, is inexorably approaching a hyperinflationary collapse—a crisis unprecedented in its scope and the threatened loss of billions of human lives.

The great danger of a world catastrophe is something practically all experts around the world now agree on. At the summit of U.S. President Biden and Russian President Putin in June of this year, the problem of strategic stability was foremost in their talks. But there will be no positive results from strategic stability talks, unless the fundamental problems are solved, which are causing that instability and leading toward catastrophe.

These questions have to be answered: What is behind the situation in the world economy, where international institutions like the International Monetary Fund, the World Bank, and the World Trade Organization are failing to cope with the problems; rather, on the contrary, they are fostering and deepening the crisis? Why don’t they, the world regulators, give mankind a model for a developing, crisis-free society?

I am grateful to Helga Zepp-LaRouche for her universal patriotic activity, to help the world’s intellectual elite creatively master the legacy of Lyndon LaRouche. And for organizing this conference in that context.

Now, specifics on what I see as the most important three conditions for heading off the looming destruction.

What was adopted at Bretton Woods in the USA in July 1944 played an important role in creating a functioning world financial system. It facilitated the reconstruction of economies destroyed by the war, and created conditions for the growth of international trade and cooperation in obtaining credit. Those were the declared purposes of the IMF and the World Bank. The exchange rate of the dollar was pegged to gold at $35 per ounce (31.1 grams). Fixed exchange rates for the currencies of participating countries were a firm foundation for the recovery of national monetary systems. This allowed national banks the possibility of supporting a stable exchange rate for their currencies. The U.S. dollar’s peg to gold made it a reliable world reserve currency.

But the growth of national economies after World War II and the formation of transnational corporations and, related to that, an enormous demand for dollars, simultaneous with the USA’s growing aspiration to establish world hegemony, produced the outcome that the United States itself began to subvert the fundamental principles of the Bretton Woods system.

In August 1971, U.S. President Nixon announced a temporary ban on the convertibility of the dollar to gold at the official rate, thus laying a fuse under the world monetary system. At the Jamaica International Monetary Conference in 1976, that fuse was lit, with the replacement of fixed exchange rates with a floating exchange rates regime. That was a powerful impulse for the development of financial speculation, first and foremost in the USA itself, as well as in the banking systems of all the capitalist countries.

Dollar emission itself was outsourced to a private organization (shares in which have a special status), the U.S. Federal Reserve System. Printing paper money with a face value of 1 to 100 dollars, when it costs 20 cents maximum to produce a bill, was a profitable business. Meanwhile, the Fed’s assets are growing like yeast. From 2008 to 2020, they increased eight-fold, from less than $1 trillion to $7.8 trillion. And the American power elite is not greatly worried by the constant growth of the U.S. national debt, which reached $28.3 trillion as of May 2021, or 149% of GDP.

The foreign debt of almost every country in the world is increasing. It increased by $24 trillion in 2020, reaching 366% of global GDP. This process is promoted by the IMF’s vicious policy, in line with the Washington Consensus, of making loans on condition of reforms, which require a reduction of the role of the state in national economic development (and especially in the real sector) and in social services.

Therefore, convening a new Bretton Woods conference is an urgent necessity. The Schiller Institute has been doing enormous work to initiate this, for more than one decade. In 2008, French President Nicholas Sarkozy, British Prime Minister Gordon Brown, and German President Horst Köhler likewise called for holding a new Bretton Woods conference to work out a new global financial system.

We need a system based on multiple reserve currencies. I think that the basket of currencies could include, besides the dollar and the euro, also the Chinese yuan, the Russian ruble, the British pound sterling, the Japanese yen, and the Indian rupee, bringing together the currencies of the countries that are economically the most powerful and the largest in population and natural resources potential. We need a new peg to gold as the basis for fixed exchange rates among the leading world currencies.

Without question, there need to be radical changes in the policies of the IMF.

Abandoning the principles of the 1944 Bretton Woods conference led to an unprecedented increase of bank speculation. Instead of a well-conceived credit policy (with a priority on long-term credits, which are needed for developing an economy, especially the real sector), banks everywhere started turning into speculative giant squids, sucking monetary resources out of business and the population. And then these resources are put into short-term microfinancing or repeatedly sold, to maximize bank profiteering. From here you get financial derivatives bubbles. The financial bubble of derivatives is now greater than $1 quadrillion, which is 10 times world GDP.

The rotten financial system can collapse at any moment, in a chain reaction. The scope of destruction from a collapse of the world financial system may be apocalyptic. Even now, the ongoing process of pumping up financial bubbles is leading to a continuous reduction of investment in manufacturing and infrastructure, and widening the gap between wealthy and poor people.

But a rescue of the banking system will be reasonable and progressive, only if there is global banking reform. Lyndon LaRouche never tired of repeating the need for this, proposing, on the model of the Glass-Steagall law, to amputate speculative banking capital, putting an end to what he called the “casino economy,” and making it possible to replace the monetarist system with a new, credit system. That was essential to the American credit system, established by Alexander Hamilton 200 years ago, which proved to be highly effective.

Vladimir Lenin, the ideologue and organizer of the socialist revolution in Russia and leader of the first socialist state in the world, the USSR, 100 years ago uttered this ingenious phrase: “Communism equals Soviet power plus electrification of the entire country.” That was an astoundingly precise formulation of the key idea that human society would achieve perfection when the government was just, and was of the people and for the people (U.S. President Abraham Lincoln had this idea as well). That second condition was the complete electrification of the country. Thence came the ingenious GOELRO plan, which became the basis for the rapid development of the Soviet economy.

The question of a just government is a separate conversation.

But let’s now look at the issue of providing the entire planet with the energy necessary for meeting the most difficult scientific and technological challenges, ensuring economic growth worldwide and safe and comfortable conditions of life for people. That is the task of all tasks.

LaRouche did not merely philosophize about the need for the constant growth of energy sources; he aimed physical economy at precisely this goal. For evaluating this process objectively, he developed the criterion of the relationship between energy-flux density and relative population-density, and saw the solution of this problem in providing for mankind the most reliable and cheapest energy: nuclear energy. And he welcomed the technological improvement of nuclear power reactors, insisting on the need for international cooperation in developing them and putting them into operation.

We remember how Lyndon LaRouche declared with emotion:

We should tear down all the damned windmills in the United States and destroy the solar panels. These are low energy-flux density technologies. They mean bankruptcy!

And what do we have now?

Against scientific logic and the real requirements of scientific and technological progress, “green energy” is being spread. No attention is paid to how this suits the climatic conditions of a given country. In 2020, the “Great Reset” was openly proclaimed, under which the “Green New Deal” became the official doctrine of U.S. President Biden—openly and brutally imposed on all nations around the world. That means the developing countries, first and foremost. With blandishments about fighting for climate improvement and defending the environment, Third World countries are driven into the trap of chronic energy insufficiency. This deprives them of the possibility of lifting up their national economies, defeating poverty, and stopping their population from dying out.

The catastrophe in Texas in the Winter of 2021 clearly showed the vulnerability of windmills and the impotence of the government to defend the population. And that was in the United States!

We see very well in Ukraine, the artificial, aggressive imposition of green energy under pressure from the West. In 2020, Ukraine’s nuclear power plants generated 51.2% of the country’s electricity, while 35.2% came from thermal power plants running on coal or natural gas. And I stress, Ukraine has enough coal deposits for the next 100 years. Ukraine’s own natural gas extraction covers the country’s entire housing and utilities requirements. 5.1% of Ukraine’s electricity came from hydroelectric and only 7.3% from wind and solar. But while generating only 7%, green energy accounted for 25% of the cost of electricity. The constant increase of electricity rates is an unbearable burden on practically the entire population

For 30 years, Ukraine has been experiencing the destruction of material production. GDP in 2020 was only two-thirds of its 1990 level. The country’s energy base has been destroyed at an even faster rate: from 298.8 billion kilowatt-hours in 1990, electricity generation has dropped to 148.8 billion kilowatt hours in 2020. It has fallen by one-half!

But instead of increasing energy-flux density, which would mean developing nuclear power and improving our thermal power plants, the West is twisting the arm of the Ukrainian government, forcing green energy on us. Government guarantees, big enough to bankrupt the national budget, are being offered for windmill and solar panel installations, which already occupy millions of hectares of Ukraine’s fertile arable land.

President Biden and German Chancellor Merkel, meeting on July 15, 2021, agreed (without Ukraine’s participation or approval!) to give our country $1 billion for a “green fund,” the purpose of which is a transition to renewable energy sources. This is a fund for the murder of Ukraine.

I would like to remind you that before the destruction of the USSR, Ukraine was among the top ten developed countries by GDP per capita, but now it is the poorest country in Europe, with the lowest life expectancy. A UNICEF report this July acknowledged that 10 million people in Ukraine are going hungry. That’s one out of three! (Because only 30 million people are left, out of Ukraine’s population of 52 million in 1990.)

What awaits Ukraine in the future? Will it be a cemetery with windmills in place of crosses?

Therefore, mankind must choose: either fight for our own salvation and progressive development, or acquiesce to the horrific prospect of global destabilization and catastrophes.

Thank you for listening!