The Importance of Physical Economics in Today’s World

Ding Yifan is Deputy Director, Research Institute of World Development, China Development Research Center (DRC). This is an edited transcript of his presentation to the August 14, 2021 LaRouche Legacy Foundation seminar, “On the 50th Anniversary of LaRouche’s Stunning Forecast of August 15, 1971: So, Are You Finally Willing To Learn Economics?” 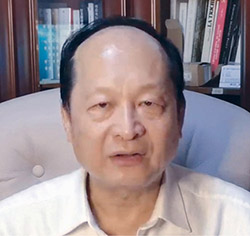 I’m very honored to be able to take part in this very important event of the Schiller Institute, and to talk about the importance of physical economy in today’s world.

Lyndon LaRouche is the inventor of “Physical Economics.” When the Nixon Administration defaulted in 1971 on the U.S. commitments to the Bretton Woods system, and decoupled the U.S. dollar from gold, Bretton Woods collapsed.

Mr. LaRouche forecast the danger of excess liquidity in the world. And 50 years later, many things predicted by Mr. LaRouche are happening. If we do not pay attention to these matters today and let them continue to develop, the world will advance in a more threatening direction in the future, and bring us into a dangerous abyss.

We must be aware of the two incidents mentioned by Mr. LaRouche: the abuses of currency issuance and the disorderly development of the financial industry:

When the U.S. dollar is decoupled from gold, the U.S. government is easily tempted by making monetary mistakes indiscriminately. In fact, many countries have made the same mistakes, but they have all paid a heavy price for it. 2,000 years ago, under the Han Dynasty, Wang Mang usurped the power and issued new coins. He decided to mix gold in the newly issued currency with brass. Prices soared, and Wang Mang’s regime was overthrown 14 years later.

After the Mongols occupied the Central Plains, they established the Yuan Dynasty. They found that the paper money system created by the Song Dynasty, the previous dynasty, was very convenient, so they accepted it all. However, in the Song Dynasty, paper money was only a substitute for metal currency, which facilitated commodity transactions.

When the Yuan Dynasty was short of money, more paper money would be issued to supplement the finances. Soon, the proliferation of paper money caused inflation and also insurrections everywhere in China, and the Mongols were soon driven back to the northern grasslands.

Since the 1970s, the currency issued by the United States has flowed all over the world. As the U.S. dollar has a unique status as the world’s reserve currency, the excessive liquidity of the U.S. dollar has brought huge inflationary pressures around the world. In recent years, the U.S. government seems to be addicted to the use of “debt monetization.”

Since the COVID 19 epidemic, the Federal Reserve, the central bank of the United States, has bought as much bonds as it had purchased since the 2008 financial crisis. When the central bank buys bonds from the market, it means in economic textbook [talk], it’s “printing money.” The consequences of printing money in such a way is easily imaginable.

The disorderly developments of the financial industry have become the entropy of this era, rather than a tool to provide blood for the economy. Mr. LaRouche, in his book, So, You Wish to Know All About Economics? used the concept of “entropy” in physics, to describe those activities in the economy that are working, but cannot generate the kinetic energy to promote technological progress.

Entropy was proposed by the German physicist Rudolf Clausius and refers to kinetic energy that cannot be used for work. LaRouche believed that if a society becomes entropic, it is a dissipative structure. It will consume a lot of energy without producing any real useful value, and will eventually exhaust the resources of the entire society.

Since the “deregulation” of the U.S. financial market in the 1980s in the United States, financial institutions and financial trading have grown exponentially. Although wealth on paper has increased a lot, it has not contributed greatly to the real economy. Although the expansion of financial assets has absorbed somehow the excessive liquidity, it has not allowed money to flow into the physical market. Although it has contributed to preventing an overall rise in prices, it has created a vicious circle of “boom and crash.”

Since then, without bubbles, the capital market cannot operate normally. But the bubble will definitely burst, one day or another. Therefore, to maintain this vicious circle, we must continue to create “myths” and make those poor retail investors in the stock market believe that as long as they follow these “myths,” they can get rich overnight.

Today, financial derivatives transactions have been completely decoupled from actual demand; and they are the entropy of today’s economic development.

Although oil futures trading is an important product in the financial market, it may not be the trade with the largest gap between futures and real products. In other words, the degree of disconnection between the virtual economy and the physical economy is very high, perhaps more than ten times. And most of the virtual economy is idling there, and in the end, it is not transformed into real things.

This is the “cancer” of the world economy today; and without getting rid of this cancer, we may slip into the entropic society that Mr. LaRouche mentioned. I will stop here today. Thank you very much for your attention