The World Is Waiting for the Ideas of Lyndon LaRouche

Dr. Józef Mikloško is the former Deputy Prime Minister of the first Czech and Slovak Federated Republic government after the fall of communism. He is also a former advisor to the President of the Slovak Republic, and a former Ambassador to Italy and other countries. He is a professor, a writer, a tireless fighter in defense of political prisoners, and a dear friend of Lyndon and Helga LaRouche. This is an edited transcript of his presentation to Panel 1, “On LaRouche’s Discovery,” of the August 14, 2021 LaRouche Legacy Foundation seminar, “On the 50th Anniversary of LaRouche’s Stunning Forecast of August 15, 1971: So, Are You Finally Willing To Learn Economics?” Dear Helga Zepp-LaRouche, dear my old and new friends, thank you for the invitation to speak on this panel.

The heritage of Lyndon LaRouche is a very important question for this crazy world. Lyn was a politician, an economist, mathematician, and musicologist. I had never met a more educated person in my life. He was a generator of new ideas, of variously to save Christianity, family and life.

I’ve met with him 17 times, 6 times in Germany, 2 times in Slovakia, and 3 times in Rome, when I was the ambassador of Slovakia for five years. In my book Very Top Secret, I devoted about 80 pages to him.

His political program was the need to produce, not speculate; moral principles must be established in politics and in economy. He proposed alternatives to reform the financial system. He predicted a crisis due to the destructive impact of derivatives speculation. Printing money with no backing in the U.S. and Europe today is called “quantitative easing.” Lyn criticized the current financial system, its focus on speculation in the stock exchange, and operations in derivatives trading. The financial market is currently destabilized by pumping money into crisis areas, as the International Monetary Fund has still been doing for years.

Lyn often criticized the decision of President Nixon about the cancellation of the Bretton Woods agreements. He proposed the creation of a New Bretton Woods agreement which would introduce fixed but adjustable exchange rates, the possibility of respecting convertibility if a national government deemed it necessary, controlling currency trade and capital movement. His proposals have long been ignored; his topics have been taboo in the speeches of politicians.

I became familiar with Lyn’s case in 1990, when I was, after the Velvet Revolution in Czechoslovakia, two years the Vice Premier for Human Rights in the post-Communist federal government. I quickly understood the many irregularities of his political persecution. It was a tragedy, that at the time of the Fall of the Berlin Wall, when it was possible to change history, Lyndon LaRouche was in jail, and could only watch his forecasts about the West and East being fulfilled. 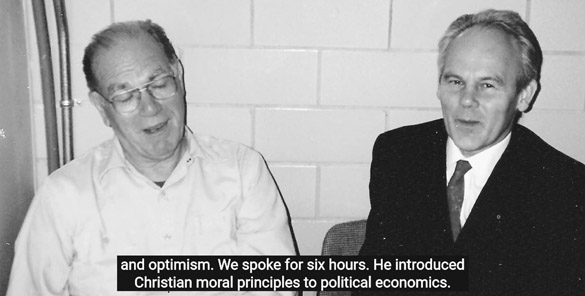 “LaRouche was a hard fighter, but also had humor and tenderness....” —Józef Mikloško. Here, Mikloško visits LaRouche in prison in 1993.

Our friendship with Lyn began in 1993, at the prison in Rochester, [Minnesota] where I visited. For him, a sentence of 15 years was a death sentence. He met me in the prison with a smile and optimism. We spoke for six hours. He introduced Christian moral principles to political economics. He was a fighter for moral renewal and the saving of Christian civilization. I was always surprised about his knowledge about Mozart, Beethoven, about supercomputers, the situation in Eastern Europe, Russia, and China, the protection of life, culture, and education. He was a hard fighter, but also had humor and tenderness, when speaking about love and agapē.

He was a generator of new ideas and alternatives for the world. 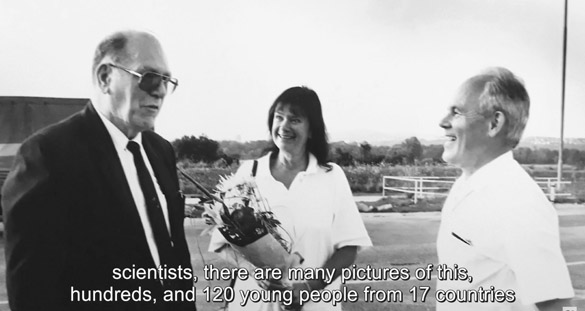 “In Slovakia, I spent one of the most beautiful and happiest weeks in my life” —Lyndon LaRouche.

Lyn was sentenced in December 1988, just after the Velvet Revolution. It was a political trial, and 15 years in prison was a terrible decision. His five associates had sentences of a total of 209 years; the trials of him and his colleagues had so many irregularities that the broad international community, including myself, protested many times against it. I wrote several letters of protest to top U.S. leaders. I visited the U.S. repeatedly, with former politicians of several countries. I visited both squalid American prisons where LaRouche collaborators were imprisoned. I am proud of having contributed to his parole in 1994, and later to the release of the entire “Virginia Five”: Mike Billington, Anita and Paul Gallagher, Lawrence Hecht, and Donald Phau.

I was very glad that in August ’94 Slovakia was the second country, after Russia, that Lyn visited, following his release in 1994. The same was repeated; he visited Slovakia also in 1996. We met in the house of a Slovak scientist, and 120 young people from 17 countries, showed that mankind can tend toward unity. I remember tears in Lyn’s eyes, around a fire, we sang folk songs. I was proud when he told me, “In Slovakia, I spent one of the most beautiful and happiest weeks in my life.” In 1996, the LaRouches met over 100 young people from over 17 countries in the home of a Slovak scientist.

We met also in Washington in September 1995, during the hearing to investigate the misconduct of the Department of Justice. As a committee, we fought for the exoneration of LaRouche, and for the freedom of his five collaborators. The commission concluded that there had been a gross abuse of inquiry and criminal violence in this process. The same situation occurred later in Wiesbaden, [Germany,] where Lyn spoke for almost three hours. “The new wine I bring cannot be in old skins. The culture of death is a scandal. We must start a new revolution based on love toward our neighbors.”

Lyndon LaRouche, the Sakharov of America, the big dissident of Russia, was a politician of original views. When he was 75 in September 1997, a gala was held in the United States for prominent singers, musicians, and politicians. I was very honored and proud that I was the master of ceremonies.

At this end of my speech, I’m going to introduce some important ideas of LaRouche’s. Man is created in the image of God and has a highly positive worth. Everything is decided in childhood. By protecting the family, we protect society. Money, the counterculture, and borderless freedom produce people for prisons. Compromise is evil and tolerance for evil must end. Commentary on lies is a lie. Let’s start a revolution of Christian love, without thinking about ourselves, like a Good Samaritan.

Dear friends: The world is waiting for the ideas which can change the problems of today’s situation. Especially the United States and the countries of the West are on the bad tendencies of hedonism, consumerism, materialism, and atheism. We must explain and spread Lyn’s ideas. Therefore, I suggest publishing, in all languages, a small book about Lyn’s basic principles, in understandable and simple and clear form, and distribute it in the whole world.

Thank you very much for listening to me, and excuse me that in many years, I’ve forgotten how to speak better English. Maybe Italian, or German, or Russian would be better. All the best to you and all countries in the world.

Dennis Small, the panel moderator, replied to the proposal.

Thank you, Dr. Mikloško. The LaRouche Legacy Foundation will certainly consider your proposal to publish in many languages a book of LaRouche’s fundamental ideas. The only part that may be difficult is to make it a small book. But the point is absolutely well taken, and I certainly appreciate your unerring emphasis, as LaRouche always had, on morality and science—morality and economics, being essentially a single subject. And the importance of achieving the exoneration of Lyndon LaRouche

I should also say that the LaRouche Legacy Foundation would very much like to translate the 80 pages that Dr. Mikloško referred to in one of his books—or in various books of his—about Lyndon LaRouche.