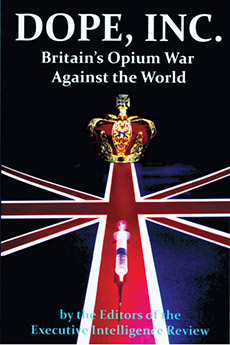 Aug. 25—Responsibility for trafficking in Afghan opium and all other narcotics in the world dope trade is nowhere a “local” matter, but run by Dope, Inc., the British-run multinational financial syndicate. This was first and thoroughly exposed in the best-seller commissioned by Lyndon LaRouche, Dope, Inc. (first edition published in 1978). An EIR team is currently updating the world picture. Meantime, starting from this vantage point is the way to understand events in Afghanistan.

In a report issued to the UN Security Council in June of this year, a special Security Council Committee reported that “the primary sources of Taliban financing remain criminal activities, including drug trafficking and opium poppy production.” The summary of the brief report states that “the issue of narcotics in Afghanistan—the production and trafficking of poppy-based drugs and methamphetamine—remains … the Taliban’s largest single source of income. It also has a destabilizing and corrupting effect within Afghanistan and contributes significantly to the narcotics challenges facing the wider international community.”

Some of the media coverage of the report, such as by Reuters, added comments by Cesar Guedes, the head of the Kabul office of the UN Office of Drugs and Crime (UNODC), who said: “The Taliban have counted on the Afghan opium trade as one of their main sources of income. More production brings drugs with a cheaper and more attractive price, and therefore a wider accessibility.”

The UNODC has in fact reported on the link of Taliban—or elements of the Taliban—to the opium trade for decades. For example, in November 2008 UNODC Executive Director Antonio Maria Costa released the Afghanistan Opium Survey 2008, which reported that “opium finances the Taliban war economy,” and stated for the press: “For a number of years, Afghan opium production has exceeded world demand. The bottom should have fallen out of the opium market, but it hasn’t. So where is the missing opium? Lack of price response in the opium market can only be the result of stock build-ups, and all evidence points to the Taliban.”

But let’s look higher up the control chain—which the mass media always refuse to do. The drug trade is not run by the Taliban—not in Afghanistan, and certainly not in the world. Look to Dope Inc. for that chain of command.

In 2011, the UNODC’s Executive Director Yury Fedotov, provided information which pointed in the right direction, based on 2009 data that the UNODC had compiled. The picture today, a dozen years later, is much the same, but worse. The UNODC reported: “In Afghanistan and elsewhere, transnational organized crime groups were the main beneficiaries of this extremely profitable [drug] trade. UNODC estimates that the Afghan Taliban earned around $155 million in 2009, Afghan drug traffickers $2.2 billion, and Afghan farmers $440 million.”

In other words, Afghan drug traffickers pulled in about 15 times more than the Taliban, and five times what the farmers received. But the actual street sale value of all the opium/heroin produced by Afghanistan (which is about 80% of the world total), in 2009 came to a cool $65 billion, according to EIR’s authoritative calculations. So roughly speaking, the Taliban’s “cut” is just over 0.2% of the total “take” by Dope, Inc.—not very high up on the totem pole, as compared to HSBC bank, for example.

And it turns out that opium/heroin only accounted for about 10% of Dope, Inc.’s total potential revenue that year of about $800 billion. The largest component, about half, came from marijuana, followed by ATS (amphetamine-type stimulants).

So, as Lyndon LaRouche long argued, if you really want to wipe out the drug trade, start in the City of London and Wall Street.