This article appears in the September 24, 2021 issue of Executive Intelligence Review. 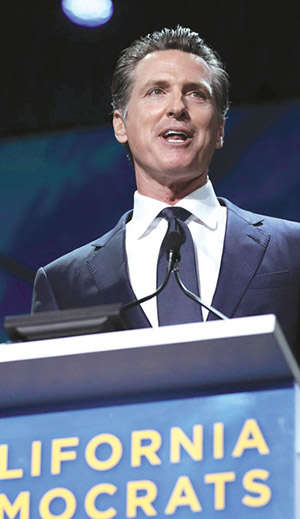 Sept. 15—Yesterday the voters of California rejected the attempt by Trump supporters and disgruntled libertarians to use the state’s recall process to remove Democratic Governor Gavin Newsom from office. Voters were asked to vote “Yes” or “No” on the recall, and secondly to choose among 46 candidates to replace Newsom if the recall passed. As of today, with more than 70% of the votes counted, nearly 64% voted against the recall. While the margin may end up a bit narrower, it is a decisive defeat for those who gathered nearly 1.5 million petition signatures to place the recall on the ballot.

This represents a stunning reversal in the last four weeks, as polls in mid-August projected a very close vote, which Newsom could lose. He was elected in 2018 with 62% of the vote, at which point his opponents launched several petition drives to recall him, starting just after his inauguration. These initial attempts failed to get enough signatures, but then the organizers switched tactics to use anger against his tough measures to curb the COVID 19 pandemic—such as mask mandates and lock-downs—to supercharge the drive for signatures to remove him. At the center of the petition drive were supporters of former President Trump.

The tide shifted back in his favor in August, when Newsom decided to focus on the anti-vax, anti-mask rhetoric of his opponents, sharply contrasting his support for implementing the Center for Disease Control (CDC) guidelines in the battle against the COVID pandemic in California, to the deadly populism of Governors in Florida and Texas, where hospitalizations and deaths have soared, due to rejection of the CDC guidelines by the governors in those states.

In California, Newsom enacted mask mandates for schools and vaccination requirements for health care workers, government employees and school staff. The state, which had seen a huge jump at the beginning of the summer in cases from the ”Delta” variant, with hospitals running short of beds and personnel, now has one of the lowest rates of new positives in the country.

When his leading Republican opponent, radio talk show host Larry Elder, pledged that were he elected, he would repeal Newsom’s mask and vaccine mandates “before I have my first cup of tea,” Newsom went on the offensive. He warned that recalling him would place public health in the hands of those whose response to the pandemic would endanger lives.

This shift was highlighted by Los Angeles Times reporter David Lauter, who wrote on September 15 that Newsom’s strategy succeeded by turning the issue into one of “personal freedom” versus “public safety.” As long as a large majority of voters “feel that the pandemic threatens their health and their children’s health, that’s not an even fight.” Exit polls confirmed this, showing that even among voters who have doubts about Newsom and are worried about the future of the state, the biggest concern is defeating the pandemic. Among those who voted, a large majority said they supported mask and vaccination mandates. 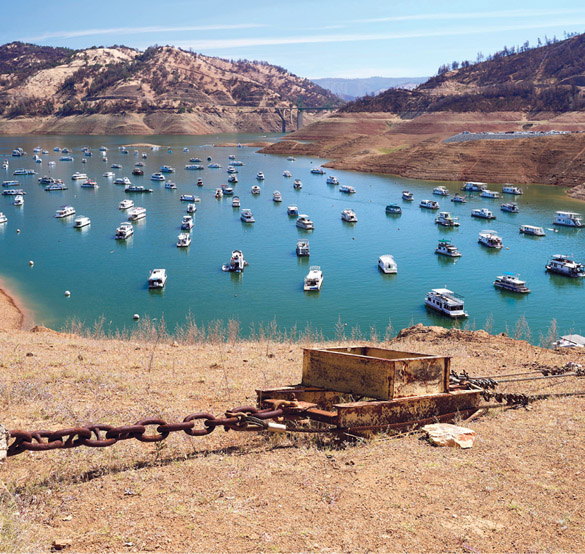 Frank Schulenburg
Houseboats on Lake Oroville in 2021 at 38% of its average water level, due to an ongoing drought and long-term negligence in new water supply infrastructure.

The Collapse of the Golden State

There is no doubt that the overall situation in California, which in the past was seen as an American paradise, is undergoing a long-term devolution, which has been accelerating. See the article by Daniel and Lena Platt, “The Rise and Fall of the Golden State,” EIR Vol. 48, No. 36, September 10, 2021, pp. 49-54.

As Governor, Newsom has made mistakes, including some which were very visible—as when he cavorted, maskless, with lobbyists at a fancy restaurant, after lecturing residents to stay at home and wear masks in public places. This act of blatant hypocrisy has been cited as a trigger for the anger against him, but there are other serious problems afflicting the state, for which his opponents blamed his administration. These include a drastic increase in homelessness, crime, drug use and trafficking, power outages, a sharp upward trend in the cost of living, and a devastating drought, responsible in part for massive forest fires and water shortages. However, these problems have been in the making for years, due to foolish, and in some cases criminal policies, implemented long before Newsom was elected—and they are not unique to California!

For example, the collapse of the physical economy is the result of neoliberal policies on a national and state level, supported by both parties, especially the refusal to invest in essential infrastructure; and by the promotion of “free market” trade policies that undermined the agricultural sector and led to the outsourcing of manufacturing, gutting the state’s once remarkably productive industrial sector.

The 1996 deregulation of electricity markets, backed by bipartisan majorities, led to the energy crisis of 2001-2003, causing blackouts and utility price hikes that led to the ouster in 2003—by recall—of Democratic Governor Davis, and his replacement by the Terminator, Arnold Schwarzenegger, who governed California on behalf of globalist corporate elites directed by George Shultz and Lord Jacob Rothschild. The state still suffers rolling blackouts today, as the deregulated markets have been made even less reliable by the imposition of Green policies, which include the shutdown of electricity production by nuclear and coal plants. 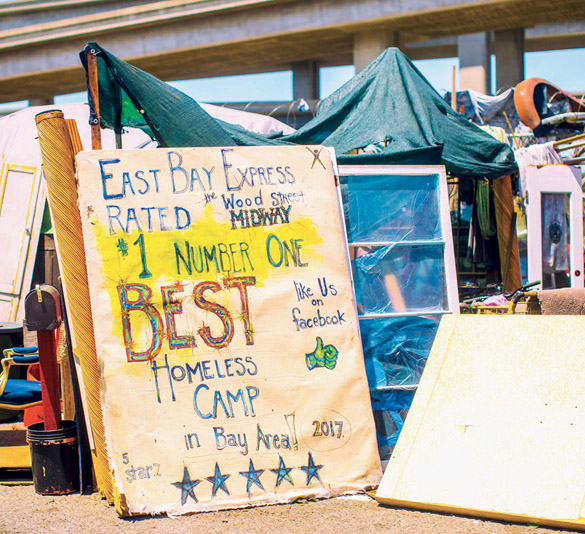 CC/Thomas Hawk
Reflecting the state of many cities in California, a homeless camp in West Oakland.

Further, there is a lack of affordable housing, as financial deregulation favored the speculative policies that created the mortgage-backed securities bubble, which popped in 2008, leading to foreclosures on millions of families’ homes. The situation facing homeowners and renters has worsened, as the Federal Reserve’s Quantitative Easing policy of handing out free money to speculators, has driven up the average home price in the state to over $800,000. In many cities, rents are unaffordable for working families, and even for those in the shrinking middle class.

This economic/financial disaster is what Lyndon LaRouche forecast in 1971, when he saw the power of elected officials tasked with defending the general welfare usurped by private corporate interests. Instead of legislation enacted by representatives who could fight for the interests of their constituents, power became concentrated in the hands of operatives of private cartels, typified by such globalist scoundrels as George Shultz, Paul Volcker, and their buddies in the Trilateral Commission, who oversaw what they called the “controlled disintegration” of the western economies. The same process put both parties into dependency on funds from Wall Street, corporate cartels and Silicon Valley. 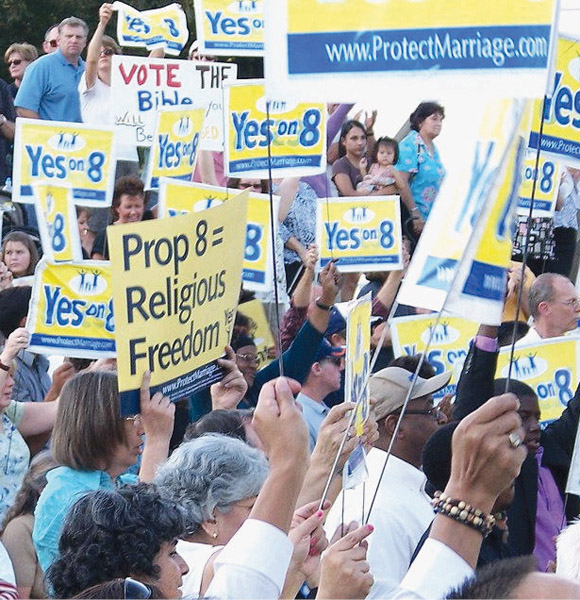 CC1/Flatworld (Richard Johnstone)
A rally for Proposition 8, one of a succession of “direct democracy” ballot initiatives in California, 2008.

As this orchestrated devolution has gathered momentum, it has exacerbated the dysfunction of the political process in the U.S., which is dominated by a virulent polarization consolidated around fake choices, e.g., “left versus right,” “liberal versus conservative,” “identity politics,” etc. This polarization, reinforced by lying narratives pushed by corporate media, has reduced most public policy debate to the level of infantile babble.

The recall process, which its advocates claim is a means of governing through “direct democracy,” increases the vitriolic polarization, by playing upon raw emotions—as, for example, the fearful anger against a public health policy such as wearing a mask, which is attacked as a “fascist” policy that takes away one’s freedom to choose. The recall policy was introduced initially by a Teddy Roosevelt “Progressive,” Governor Hiram Johnson, in 1911, in league with a gang of “Tory reformers,” allegedly to counter the power of “special interests.” They argued that the tools of “direct democracy” gave power to the people. In reality, they allow special interests to push through policies which could not survive the rigor of a legislative process. In addition to recall, Johnson introduced ballot initiatives and referenda. One example of this was a 1920 initiative to strengthen the Alien Land Law of 1913, which denied ownership of land to Japanese and Asian immigrants.

LaRouche denounced the recall of Governor Gray Davis in 2003, which grew out of the effects of the deregulation of electricity, a policy drafted by Bush and Cheney’s friends at Enron, with the backing of both parties. He pointed out that policy disagreements should be fought out in the legislative process by representatives chosen by voters in elections—that’s how the Presidential system works, with citizens making the decisions, not parties funded by corporate cartels and special interests. LaRouche said in Burbank during the 2003 recall that the adoption of government by “direct democracy” marks a shift from the American Presidential system to a form of a British parliamentary system, sacrificing the “General Welfare” in favor of private, special interests. In an article about his intervention, I summarized his remarks as follows:

[Using these tools,] a confused, frightened and irresponsible electorate can be manipulated by a well-financed campaign backed by a popular figure, who can play on their confusion and fears, to remove an elected official, or pass legislation, which actually goes against their best interests and the General Welfare.

It cost $276 million to run the attempted recall, an unnecessary expense, given that there will be an election for Governor in November 2022, and Newsom will presumably be up for re-election. By rejecting his recall, the voters of California have given themselves time to take up the challenge posed by the dramatic decline of their state and the nation, to engage in real debate and dialogue, rather than succumbing to their fears.

As for the supporters of the recall, they insist that they were defeated not by the will of the majority, but by vote fraud. They remain committed to tearing down the constitutional protections of the American system, in which the republican institutions of self-government are vested with the authority to make policy, and not left in the hands of a volatile electorate which can be whipped up by well-financed demagogues to act against their own self interest. Former President Trump denounced the outcome as “just another giant Election Scam, no different, but less blatant, than the 2020 Presidential Election Scam.” Typical of those supporting an American Jacobin revolution is the enraged comment of Anne Hyde Dunsmore, campaign manager for Rescue California, one of the groups behind the recall, who said, “What I’m not subscribing to is this grand mandate, that we got it shoved up our ass. Because we didn’t.”