by Anthony DeFranco and Susan DeFranco 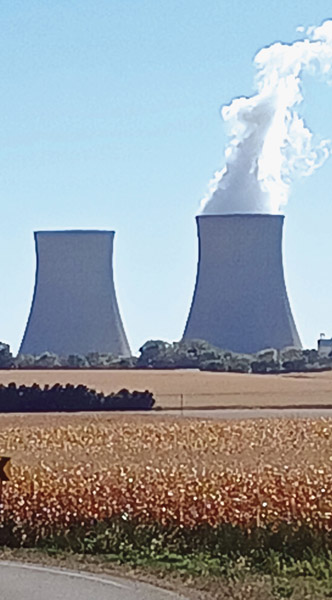 Sept. 28—The Illinois Senate on September 13 passed a comprehensive, 1,000-page energy bill, the most important component of which is that it saves two of Illinois’ nuclear power plants, each having two 1,000 MW reactors, which were otherwise headed for permanent closure. One of the plants, at Byron, was slated for shutdown the very same day as the bill’s last-minute vote in the Senate.

The Illinois nuclear victory is a counter-action to the U.S. trend to date of undercutting baseline power, and stands as a world-class event. It was achieved, however, by legislation which situates nuclear power within a bogus “climate change” imperative to reduce carbon dioxide emissions from electric power generation to zero, when in fact carbon dioxide is not a pollutant but a necessity for the biosphere and human life. It appears that elected officials, in Springfield, Illinois, or in the nation’s capital, are not capable of any clearer thinking than this compromise with a false and Malthusian premise.

Where electric power policy is thus dominated by cloudy thinking or fear of bucking a “green” thought police, only existing nuclear plants are supported. The fading demand for the first-ever commercial small modular nuclear reactor (SMR) project, that of SMR designer NuScale with electric cooperatives in Utah and Idaho, is an example. Hungary, by contrast, does not wear green blinders, and has just contracted with NuScale for 600 MW of new SMRs to be generating by 2029.

SB 2408, Illinois’ Climate and Equitable Jobs Act, establishes a statewide clean energy goal of 100% by 2050. Clean energy is defined in the bill as “energy generation that is 90% or greater free of carbon dioxide emissions.” Gov. J.B. Pritzker is in total support of carbon free energy—in 2019, he signed Executive Order 2019-06, entering Illinois in the U.S. Climate Alliance, a group of states committed to reducing greenhouse gas emissions according to the 2015 Paris Agreement. Thus Illinois—both a coal state (mining and thermal power) and a nuclear state (with 11 reactors), has been in the camp of subversive Sir Michael Bloomberg, the top anti-coal activist, including with a position at the United Nations, a worldwide “Beyond Coal” campaign, and a $60 billion personal fortune. However, since nuclear energy is indisputably virtually carbon-free, that argument was used and prevailed in the Illinois Senate, allowing the State to support nuclear energy. 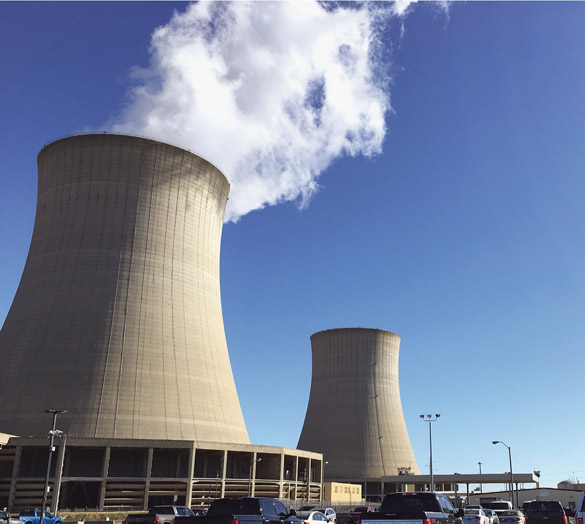 EIRNS/Susan DeFranco
Illinois’ fleet of 11 nuclear reactors is considered the safest, most efficient, and most reliable in America, producing 50% of Illinois’ electricity.

Illinois is America’s nuclear power state. Its fleet of 11 nuclear reactors is located at six nuclear plant sites, and is considered the safest, most efficient, and most reliable in America. The fleet currently produces more than 50% of all Illinois’ electricity; it is the main reason that Illinois is rated as having the fourth-lowest electricity prices in the nation. Nuclear and coal-fired power plants combined produce 80-85% of the electricity in the state, which is both a big consumer (behind only Texas, Florida, California and Pennsylvania for total power use) and a big exporter of power to other states. This year the plants operated at full power without interruption, even during the hottest July in 142 years. They likewise operated faultlessly during the extreme polar vortex this past winter (which Governor Pritzker erroneously blamed on climate change).

Nevertheless, deregulation and current market rules favor “polluting” power plants over carbon-free nuclear energy. And only two of the six Illinois plants—at Quad Cities and Clinton—currently receive state support under the Future Energy Jobs Act (FEJA) of 2016, a package of clean energy measures which provides Zero Emission Credits (ZEC), which helps to keep them going. The others are in precarious financial situations.

Exelon, the owner and operator of the Illinois nuclear plants, had given advance warning that the financial challenges of the four non-FEJA plants—at LaSalle, Braidwood, Byron and Dresden—could lead to their premature retirement without support from the state. In August 2020 Exelon officially announced that without the needed reforms, the Byron plant would close on September 13, 2021 (the day the bill passed) and Dresden in November 2021, and official notifications to decommission the plants were filed with the Nuclear Regulatory Commission. Byron is licensed to operate until 2045, and Dresden until 2029.

Representatives of The LaRouche Organization (TLO) from Chicago and collaborating labor activists in the state, have been organizing since March to save the plants with TLO’s pamphlet, “The Great Leap Backwards: LaRouche Exposes the Green New Deal Fraud.” They found support for the nuclear plants from nearly everyone, even self-described environmentalists. Visiting Byron just after the plants were finally saved, they found universal relief and increased interest in the pamphlet from shop owners and residents. This, although “many good, very skilled people left the plant over the last period,” one worker reported, due to uncertainty over whether the plant would shut down as negotiations over the relief legislation went down to the very eve of the plant’s closure.

The countdown to closure was underway a year ago, with the clock dangerously ticking with no state action to save the plants on the agenda. In May 2021, the Illinois state legislature recessed without passing an energy bill.

The discussion was all over the place, and discussion on any one bill stalled out. It was impossible to reach agreements between the opposing interests and positions among the labor unions, radical anti-emissions greenies, and down-state coal and gas interests. Moreover, the Illinois state legislature was not even scheduled to reconvene until 2022. State Senator Sue Rezin (R-Morris), Ranking Member of the Energy Committee, was desperate to get any agreement, as long as it would prevent the nuclear plants from closing on Monday September 13, Exelon Corp.’s strict deadline.

On August 23, U.S. Congressman Adam Kinzinger (R-IL) wrote a letter to President Joe Biden with an urgent request for his Administration to use his emergency powers to keep the plants open. Although the U.S. Congress was “poised to pass” the Preserving Existing Nuclear Energy Generation Act, it would not be in time. Kinzinger wrote that the “astonishing failure of leadership at the State level had made the closures of Byron and Dresden imminent.”

The breakthrough came only in September, in the final two weeks for the plants. On August 31, Illinois lawmakers were told to reconvene in Springfield for one day, but only one topic was on the agenda: redrawing election districts. One can presume that that did not sit well, because the next public announcement—through a process not well understood—came on September 9, that the lower chamber, the Illinois House of Delegates, had suddenly approved an energy package to keep the threatened nuclear plants open. The Illinois Senate immediately followed, with its companion bill the following Monday, September 13, the deadline day. Governor Pritzker then signed it into law on September 15.

Exelon could now refuel the Byron and Dresden plants. Just two weeks later, on September 28, Exelon announced that it would invest $300 million in their modernization, and would hire 650 more engineers and other workers for the plants.

The Climate and Equitable Jobs Act authorizes $700 million in rate-payer subsidies for the Exelon nuclear plants over the next five years. The Act ends the controversial, deregulation-spawned “formula rate system,” and transitions to a “performance-based” system that will be overseen by the Illinois Commerce Commission, the Illinois Power Agency, and the Illinois Environmental Protection Agency to ensure energy grid reliability. It also authorizes spending $580 million a year on “renewable energy credits” (RECs), which backs the highly unreliable, low density wind and solar.

Coal plants in the state will take a big hit. Municipality-owned City Water, Light and Power in Springfield and the Prairie State Energy Campus in Southern Illinois (both very large coal concerns) have until 2038 to reduce their carbon-dioxide emissions by 45%. There are no subsidies to help those plants to develop or acquire the technologies for clean coal burning or carbon capture to meet those goals. Coal plants on industrial sites are slated for early closure as well.

The Act also mandates 40% of the state’s power to come from highly subsidized solar and wind by 2030, way up from the current 10%. It is outstanding, that the Byron nuclear plant alone produces 30% more electricity than all the solar panels and windmills ever built in Illinois.

The Act also calls for 1 million new electric vehicles in Illinois, to be in use by 2030, and pledges to give a $4,000 rebate per car. However, nothing at all in the Act addresses where the huge volume of electric power is to come from, for this shift away from internal combustion.

On the jobs front, there will be thousands of jobs saved in northern Illinois around the nuclear plants—in direct and indirect employment. But in southern Illinois, where coal is king, the region will lose jobs. Also, not having access to nuclear power, it will have to seek energy from other states—either from the coal states of Kentucky and Ohio, or from Iowa. The latter is a completely unreliable option, as Iowa ranks top in the nation for the share of its electricity coming from wind—nearly 50%.

The Illinois Manufacturing Association (IMA) opposed the bill, its President Mark Denzler saying the State would lose manufacturers because of the inevitable increase in prices for energy.

Some legislators, whose districts encompassed the nuclear plants, voted against the bill’s passage, because the “green” aspects were so bad. State Rep. Adam Niemerg (R-Dieterich) from downstate ripped into the bill, calling it “just a big money grab,” with “$18 billion to subsidize solar over 30 years.” He said it will “increase costs and unreliability of power,” and spoke out strongly against the deadly green assault on the economy:

It’s either the ozone hole, global warming, climate change or the Doomsday clock, the narrative keeps changing—when the disaster doesn’t arrive in time, just push it back another 12 years. It’s a scam, people!