Party Conference in Paris, and a
Debate on Restoring French Sovereignty

by Christine Bierre and Nancy Shavin

Oct. 1—In Paris on September 25, the political party, Solidarité et Progrès (Solidarity & Progress, S&P), hosted a presidential candidates’ debate and later held a party conference. Both proceedings were opened and closed by Jacques Cheminade, Chairman and former presidential candidate of the S&P.

The afternoon party conference was addressed in person by Helga Zepp-LaRouche from Germany, where she is President of the international Schiller Institute and also a leader of the Bürgerrechtsbewegung Solidarität (BüSo), the Civil Rights Movement Solidarity political party.

The Paris events were very successful, in that important perspectives on both the economic and strategic crises were discussed, debated and brought out as essential elements as France enters the presidential campaign season of 2022.

The morning speakers’ roster included three declared candidates in the presidential election to be held in April 2022: François Asselineau of the UPR (Union of the Republic), Georges Kuzmanovic of the République Souveraine (Sovereign Republic), and Fabrice Grimal of Concordance 2022. Though unable to attend in person, Jean Luc Pujo of the Clubs Penser La France (Thinking About France Clubs), sent a message that was read to the participants.

‘Let Us Free Ourselves from the
Financial Oligarchy’

The morning debate brought together 120 people—a considerable turnout in this pandemic period, under the banner, “Let Us Free Ourselves from the Financial Oligarchy.”

The participation was the direct result of the efforts of Cheminade, who, in recent months, reached out to many of the so-called “smaller,” sovereignty-oriented candidates. The goal is to create a common platform out of which a unity candidacy could emerge with a specific program to rid France of the international oligarchy and its French accomplices. While none of the candidates agreed at this point to forego his own candidacy in favor of a unity candidacy, there was significant agreement around the need to fight against the financial oligarchy, a major platform of Solidarité & Progrès. 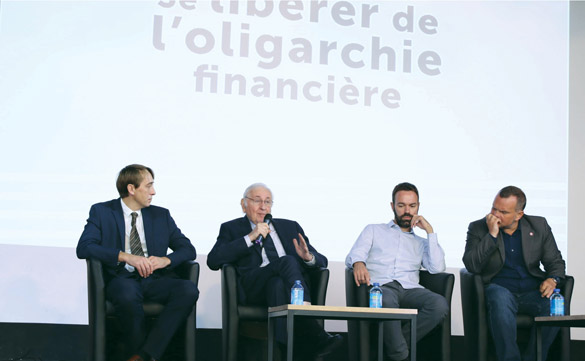 The morning session was opened by the Schiller Institute Chorus singing La Marseillaise. The arrangement for chorus by Zoltán Kodály created a beautiful harmony, most appropriate to the proceedings which followed.

In Cheminade’s welcoming remarks, he rejoiced that all those present, each in his or her own way, was an advocate for the cause of the sovereignty of France, and therefore, the cause of humanity. Cheminade continued, saying that defending the cause of unity is not easy, but is necessary. He cited a short stanza from the famous resistance poem, La Rose et le Réséda (The Rose and the Mignonette), a poem about people of different thought coming together to fight a greater evil, written in 1943 by Louis Aragon:

The speakers then spelled out their priority themes.

François Asselineau of the UPR warned against the oligarchy’s efforts to eliminate the real issues from the election. The UPR is for a “triple withdrawal,” that is, for France to leave the EU, leave the Euro, and leave NATO.

Georges Kuzmanovic of République Souveraine, is a former military officer with experience in both Afghanistan and Africa. He described sovereignty and the debt as the key issues of the next presidential campaign, concluding his remarks by saying that when a policy of debt cancellation has begun, followed by the relaunching of productive investment, that this is a policy that has been supported historically by Henri IV, Cardinal Jules Mazarin, Cardinal Richelieu, Raymond Poincaré, Charles de Gaulle, and other leaders.

Fabrice Grimal, candidate of Concorde 2022, also called for the reestablishment of financial sovereignty, through withdrawal from the Euro, and by nationalizing the Banque de France to be in the service of France and not of the markets. The Concorde 2022 political party was born out of the Yellow Vest demonstrations.

Jean-Luc Pugo, in his message read to the participants, also supported the triple withdrawal and recalled that Jean Bodin had already defined the role of the State as: “Minting currency, defining the laws, giving justice, and the deciding of war and peace.”

‘France’s Next 50 Years, in a World Freed of Permanent War’

The title of this year’s party conference, which convened in the afternoon, was “France’s Next 50 Years, in a World Freed of Permanent War.”

Helga Zepp-LaRouche spoke extensively on the urgent need for European countries to face and address the expansion of NATO, and to stop it. Calling for action on the reconstruction of Afghanistan for peace, she said that France must play a significant role in mobilizing Europe for peace.

Now why is it urgent, that we start a dialogue in all of the European Countries, but especially between Germany and France, as to why is it very urgent to leave NATO? Because NATO right now is about to become Global NATO; they’re expanding into the Indo-Pacific. They’re in a confrontation mode with Russia and China, which if not stopped can only lead to a catastrophe, namely, the danger of a Third World War and therefore the potential annihilation of civilization.

The treason committed against France with the cancellation of the sale of submarines to Australia comes in the context of a strategic situation which is extremely advanced, because it went along with the creation of the so-called AUKUS—Australia, UK, U.S.—new military alliance in the Indo-Pacific.

Zepp-LaRouche also addressed the humanitarian crisis in Haiti. She presented the nature of the paradigm shift created by the withdrawal of the U.S. and NATO troops from Afghanistan. She further elaborated a policy of economic development:

Now, the concept of the “Coincidence of Opposites.” It’s not a static concept, it’s a concept of development. The common interest of the Central Asian countries, Russia, China, Pakistan, India, Iran, is expressed, for example, in the development of the Belt and Road Initiative. And as always in history, infrastructure development has an incredible civilizational effect on the population. So the Western media are very much shrieking about the “rights of women” in Afghanistan. Well, the Federal Reserve—and Treasury Secretary Janet Yellen—are doing a terrible job for the women in Afghanistan by denying the funds which belong to Afghanistan, which policy is right now killing pregnant women. So I think the truth must be told, and the reality is that the development of Afghanistan is an absolute must!

Further, Zepp-LaRouche detailed the attacks on China coming from major news outlets in Australia, owned by Rupert Murdoch, calling openly for a coup d’état against President Xi Jinping, along the same lines as presented in an article published earlier by the Atlantic Council called, “The Longer Telegram: Toward a New American China Strategy.” This article calls for a coup inside China.

Zepp-LaRouche also scored the attacks on Russia, against President Vladimir Putin, and she reported on the massive push in the U.S. right now to expand the number of U.S. troops and weapons systems in Ukraine, the Baltic states, Poland and Romania.

In her closing remarks to the conference, Zepp-LaRouche outlined the critical problems facing mankind at this point, and that the big problem is that in Europe the connections to the historic, great traditions have been lost and must be regained.