An Enhanced Opportunity for Afghanistan and the World

by Michelle Rasmussen in Copenhagen

Oct. 15—The Schiller Institute in Denmark held a successful, combined in-person and livestream conference entitled, “Afghanistan: What Now? Peace through Economic Development,” on October 11, 2021, in Copenhagen. The full video of the event is available here .

Now that the war in Afghanistan is over, and many in the West are shaken by events, we are presented with a unique opportunity to shift away from a policy based on regime change and military intervention, to a policy of peace through economic development. This applies to Afghanistan, and, also, to the rest of the world. Everyone on the planet can now see the massive failure of the Western regime-change wars since 2001. They have cost millions of lives, and trillions of dollars.

With the acute humanitarian crisis facing Afghanistan, this paradigm shift could not be more urgent. A major relief effort is immediately required, and the Afghanistan government’s funds, now frozen in the U.S. and other countries, must be immediately released. The international community of governments and aid organizations must respond, and quickly.

At the same time, a long-term effort to build up Afghanistan’s domestic infrastructure, improving the country’s education and health care system, and connecting the country to the New Silk Road (Belt and Road Initiative) is required. It is also a golden opportunity to abandon geopolitics and establish win-win cooperation between the United States/Europe and China, Russia and other nations.

Therefore, on short notice, the Schiller Institute in Denmark took the initiative to organize this seminar/webinar with specialist speakers who traveled to the Copenhagen meeting venue to personally participate: Hussein Askary, Southwest Asia Coordinator for the Schiller Institute; Professor Pino Arlacchi from Italy, who has had significant experience in Afghanistan; and H.E. Ahmad Farooq, the Ambassador from Pakistan to the Kingdom of Denmark. (Their credentials and presentations follow in this issue.)

The two-week intensive organizing process for this event, reached throughout the dozens of foreign embassies in Copenhagen, including personally visiting 38 embassies, and also into the Danish political and defense institutions. In particular, during this period, the Danish Development Minister, Flemming Møller Mortensen, led an event at the Danish Institute for International Studies (DIIS), which was convened to advise him about what he referred to as the dilemma involved in dealing with Afghanistan’s acute humanitarian crisis, now, after the Taliban took power. The circulation of the Schiller Institute’s event invitation and its special newsletter on Afghanistan, provided needed perspective to the DIIS audience.

At the Oct. 11 Schiller conference, guests came in person, and more attended via livestream, together representing countries in Southwest Asia, other regions in Asia, Africa, and Europe. There was diplomatic representation from Afghanistan and its immediate neighbors to the west, east and northeast. The Afghanistan embassy in Oslo, Norway contributed a report to the seminar, and many points were discussed by the speakers. Statements to the conference came from the Embassy of the Peoples Republic of China, and the Islamic Republic of Iran in Denmark. 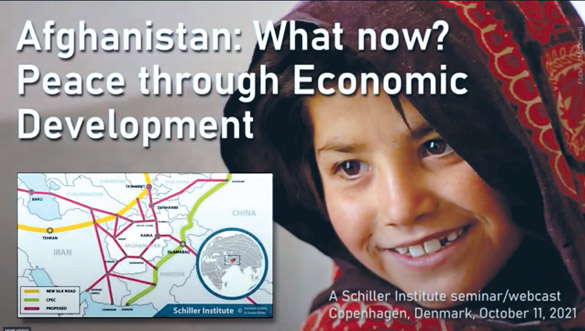 The Schiller Institute in Denmark has long played an important role in international policy affairs, but this was its first physical meeting since the onset of COVID-19. The event invitation offered insight into the crucial issues now at stake by Helga Zepp-LaRouche, Schiller Institute chairman and founder of the international Schiller Institutes. The day of the seminar, she sent a special message, announcing that the Schiller Institute would have a day of international action on Thursday, October 14, to stop the freeze of Afghan assets, adding: “maybe if other forces would join this, it will make the demand stronger.” Her call was then answered by remarkably widespread participation, from Mexico City, to Chicago, New York, Paris, Stockholm, Berlin and many more locations.

This activation is very important, in view of the continued blocking of needed response by the United States and Europe. On Oct. 12, EU Foreign Ministers met on Afghanistan, but did next to nothing toward the scale of what is required. On Oct. 14, U.S. State Department spokesman Ned Price reiterated that the U.S. will not release the $9 billion of assets it is withholding, which belong to the people of Afghanistan; he repeated U.S. conditionalities about the Taliban.

The Chairman of the Schiller Institute in Denmark, Tom Gillesberg, moderated the conference. In his opening remarks, he responded to the conference title question, “What now?” by saying that there must be full-scale action to solve Afghanistan’s problems, saying that it “is going to be through collaboration with all the neighbors” and major nations. Gillesberg added, “We now know that you cannot solve problems through military means.” He spoke personally of how his homeland. “Denmark, since 1999, went from participating in peacekeeping operations, to instead, go into a militaristic foreign policy, basically joining every single war around, despite being only 5.8 million people! Now, in Denmark, there’s a reflection that this was an utter failure. What now?” A well-known figure in Denmark, Gillesberg is a former candidate for parliament and city council. He holds a Schiller Institute webcast twice each month, and also is the EIR Bureau Chief in Copenhagen.

Activate for Peace Through Development

All of the speakers have been actively engaged in matters related to Afghanistan and the region; their presentations were followed by a period of questions and dialogue.

Hussein Askary, the Schiller Institute’s Southwest Asia Coordinator, is a board member of the Belt and Road Institute in Sweden. He is the author of the recent article, “Dawn of Geo-Economics – Extending the Belt and Road to Afghanistan.” He co-authored the Schiller Institute 256-page strategic report, “Extending the New Silk Road to West Asia and Africa: A Vision of an Economic Renaissance,” and was responsible for the Arabic translation and editing of the 374-page EIR Special Report “The New Silk Road Becomes the World Land-Bridge.” Originally from Iraq, Askary is a resident of Sweden. He has recently participated in many webcasts and been interviewed on TV in several countries.

Prof. Pino Arlacchi, is the former Executive Director of the UN Office for Drug Control and Crime Prevention (1997-2002), and former European Parliament Member and Rapporteur on Afghanistan. Currently a sociology professor at the School of Political Science of the University of Sassari in Italy. Prof. Arlacchi participated in two recent Schiller Institute international webcasts on Afghanistan. On Sept. 5, Helga Zepp-LaRouche issued the recommendation that Professor Arlacchi be appointed by the international community to lead a global aid and development mobilization, with full support for emergency aid, and rebuilding of Afghanistan. His home page is available here.

The speeches from the seminar, followed by the Chinese and Iranian embassy statements to the event, and excerpts from the discussion follow. We hope that they will give you a better insight into what we must do, now, to ease the suffering of the Afghani people, and chart a new course for the world’s political, strategic, and economic future.