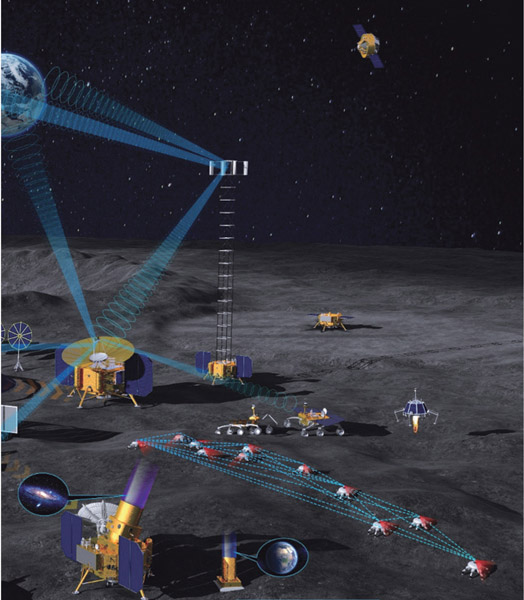 Roscosmos/CNSA
An artist’s conception of the planned International Lunar Research Station. The ILRS will include a base on the lunar surface, and a set of rovers and intelligent “hopping” robots. Below is the Russian-designed Luna-25 lunar lander, scheduled for launch in 2022.
View full size 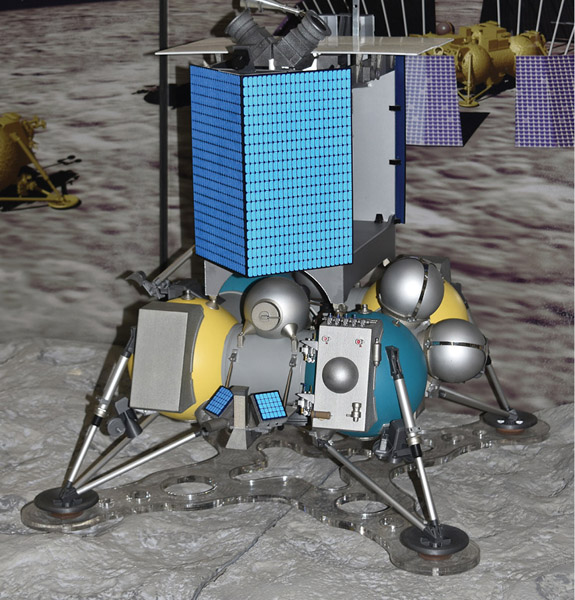 Oct. 9—A shift is taking place in the political alignment of international space agencies, which will have a dramatic effect on many programs, particularly in the United States.

Up until the present time, Western Europe, Japan, Canada, and in general, countries considered as “the West,” aligned themselves with U.S. space programs, for example, for transportation on the Space Shuttle to the International Space Station (ISS). But there is no plan for NASA to continue being able to do research or activities in low-Earth orbit after the ISS is retired. The government is turning over low-Earth orbit to the private sector. In fact, China will have the world’s only space station, the Tiangong. As former NASA Administrator Charles Bolden commented, referring to the ban on space cooperation with China, if the United States doesn’t change its policy, “it may be on the outside looking in.” Today’s U.S. “astronauts” are generally people who can pay for a ride in space.

Russia and China are planning to create transportation between the Earth and the Moon, and infrastructure on the surface of the Moon to support scientific research. The International Lunar Research Station (ILRS) will be open to all countries who wish to participate. There will be different levels of participation in concert with a country’s capabilities.

The project is planned on a very aggressive time-table with multiple unmanned missions to the Moon by Russia and China over the next ten years. The first manned landing will be around 2030. By 2036, the ILRS will be completed. 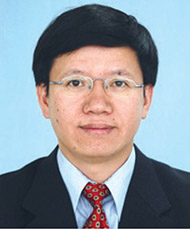 CNSA
Wu Yanhua, Deputy Director of the China National Space Administration (above), addressed a seminar at the Zhuhai Air Show on the International Lunar Research Station, which included guests from Italy, France, and Germany, as well as envoys from a number of foreign embassies. Zhuhai, China, September 27, 2021.
View full size

The first formal presentation of the Chinese government on the ILRS was by Wu Yanhua, Deputy Director of the China National Space Administration, on June 16 at the Global Lunar Exploration Conference in St. Petersburg. His talk, titled “Road Map for Creation of the International Lunar Research Station,” described the scientific objectives of the project. In general, there is a science of the Moon, and science from the Moon. The first is the study of lunar topography and geological structure and the chemistry, materials, and geochronology of the Moon. The second category includes lunar-based astronomical observations and lunar-based Earth observations.

Phase I from 2021 to 2025 is devoted to reconnaissance of the Moon. China has two missions planned, Chang’e-6 and Chang’e-7. Russia has planned to launch Luna-25, 26, and 27. And there is the potential of missions by other partners.

Phase II, 2026-2035, is divided into two stages. In Stage 1, from 2026-2030, the objective is technology verification for the command center, lunar sample return, massive cargo delivery and high-precision soft landing. Missions planned for Phase II include Chang’e-8 and Luna-28. Stage 2, from 2031-2035, has the following objectives: the establishment of research, exploration, and verification of in situ utilization of resources, and testing of other potentially widely-used technologies.

With Phase III (Utilization) after 2036, the objectives are lunar research and exploration, technological verification, and supporting human lunar landing.

International partners can choose any form of cooperation as follows:

Category A: Partners to systematically contribute to the development of general architecture, scientific objectives, roadmap development, and to participate with scientific or engineering missions.

Category B: Partners to develop, in cooperation with China and/or Russia, at least one or several space systems based on the ILRS general architecture and functions.

Category C: Partners to develop at least one of a set of space subsystems based on the defined mission of ILRS.

Other categories will be available for countries that want to cooperate in different parts of the mission to the best of their capability.

At the biennial China International Aviation & Aerospace Exhibition in Zhuhai, September 28 to October 3, CNSA had an opportunity to present the ILRS to many international observers, most notably the three largest supporters of the European Space Agency—Germany, France, and Italy. Here also, Wu Yanhua gave a presentation explaining the possibilities for interested parties to partake in this historic undertaking.