Nov. 6—It is clear from the remarks of Prince Charles and his favorite central banker Mark Carney, Sir Michael Bloomberg, and BlackRock CEO Larry Fink at the Glasgow “Climate Summit,” that they have achieved great financial momentum in organizing the worldwide 1% and its bankers to cut off new fossil fuel investment and carbon-intense industrial and agricultural investment. They also had to acknowledge, albeit obliquely, that they have a great problem—the “green finance” investments like wind and solar power that are supposed to replace coal, oil, and nuclear worldwide, are failures. Their failures—typified, for example, by “renewable” power sources generating less than 10% of their rated power capacity on the grid, for months—have caused economic breakdowns and tremendous run-ups in the prices of reliable power sources.

The “world leaders” speaking at the sessions and press conferences of the two-week so-called COP26 summit—becoming known as FLOP26 for all the achievements and “commitments” claimed there which turned out to be less than real—blithely ignored the inflationary volcano erupting on the world as they spoke. Well they might try to ignore it: The global Green New Deal they are pushing, triggered it.

Nothing else can explain the very plain facts about this inflation. After the 2008 global financial crash, the major central banks ran intense money printing operations for years through their quantitative easing (QE) operations to bail out banks. Yet for the decade 2009-19, inflation of commodity prices, as registered in 20 of the most important commodities, was nil. It averaged 2% in 10 years or 0.15% per year for those 20 commodities. (These include all the major energy-source commodities, foods, fertilizers and solvents, and industrial metals and ores.) But then, in just two years from July 2019 to July 2021, those same commodities inflated by an average of 66%, or about 30% per year. And then, in just the three months from July 15 to October 15, 2021, ten of those commodities for which such very recent price information was available, rose in price by an average of 38%, inflating at a rate—were it continued—of nearly 170% per year. 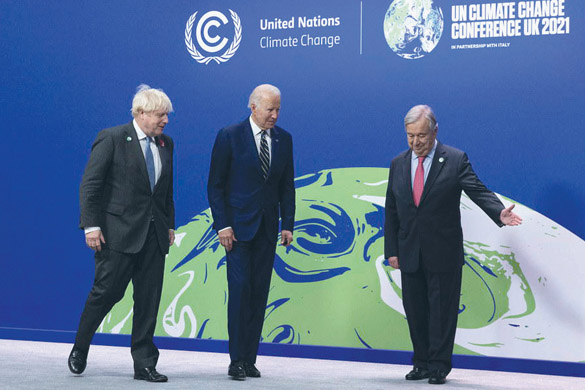 Adding Gasoline to the Fire

There can be no question that the sudden take-off of general inflation in the period from the Fall of 2019 to the late Spring of 2020 coincided with two fundamental actions. First was the takeover by central banks from government, of the dominant position in the direction of spending and investment—called “regime change” by the bankers who raised it as a battle cry at the August 2019 Jackson Hole, Wyoming central banking conference. And second was the acceleration of the dominant “private” side of the Green New Deal, the shut down in investment in new fossil fuel power and heating projects around the world, epitomized by the “Beyond Coal” campaign of Sir Michael Bloomberg, which cut U.S. coal power capacity by more than half.

New, greenfield investment in fossil fuel energy for power and heat has essentially stopped worldwide outside of two great Asian national powers. A shocking 90% of all new electric power capacity additions in the world in 2020-21 were energy-diffuse wind and solar power installations and gas turbine plants installed to back up these unreliable “renewables”—as reported happily by the International Energy Agency.

This worldwide anti-productivity transition in energy and power technology was combined from March 2020 onwards by money-printing by major central banks on a scale not approximated even by their response to the 2008 crash. Since the COVID pandemic began hitting economic production across the board that March, the Federal Reserve has created just under $5 trillion in new bank reserves in 18 months; the European Central Bank created $4 trillion; the U.S. Treasury has borrowed and spent $5 trillion in “pandemic relief” in effective partnership with the Fed, and so on.

This fatal combination of massive money-printing and replacement of reliable with worse than unreliable sources of power for the economy, has unleashed disastrous power failures from Texas to Northern Europe to the Indian Subcontinent and even to China, while triggering storms of hyperinflation.

At what was clearly the British Royal Family’s global Climate Summit in Glasgow, the biggest honchos of the global Green New Deal could certainly see the spectacular failure underway. They are aware, for example, of the sudden chaotic “comeback” of coal in the United States from 15% of power generation in late 2020 to 27% now, similar developments in greener-than-thou Germany, the desperation for oil and natural gas products.

But their response was to promise an accelerated “war-like” mobilization, in Prince Charles’ words, to deny these resources to mankind as soon as possible. The Earth Prince gave keynote addresses both at the G20 heads of state meeting just before the Climate Summit, and at Glasgow. “Climate change and biodiversity loss,” he said on November 1 at Glasgow,

pose an even greater existential threat than the COVID-19 pandemic, to the extent that we have to put ourselves on a war-like footing. We know what we must do. With a growing global population creating ever-increasing demand on the planet’s finite resources, we have to reduce emissions urgently, and take action to tackle the carbon already in the atmosphere, including from coal-powered power systems….

We know this will take trillions, not billions of dollars. We also know that countries, many of whom are burdened by growing levels of debt, simply cannot afford to go green. Here what is needed is a vast military-style campaign to marshal the strength of the global private sector. With trillions at its disposal, far beyond global GDP, and with the greatest respect, beyond even the governments of the world’s leaders, it offers the only real prospect of achieving fundamental economic transition. [emphasis added]

This mobilization, Prince Charles and Mark Carney made clear, is of the 1%—no, really the 0.1%—what they are pleased to call “the private sector” but is really the trans-Atlantic world’s biggest banks, money-managers and billionaires. The “vast military-style campaign” is to cut off fossil fuel heat and power, nitrogen fertilizer, carbonized steel, cement and construction materials, and industrialization from the billions of the 99%, and greatly reduce their numbers.

The absurd heights of this campaign’s “enthusiasm” were exhibited in the over-the-top utopian babble of British Prime Minister Boris Johnson, the “host” of the Glasgow circus. And they were luridly shown in an agreement which U.S. President Joe Biden, at the G20 summit on the eve of the Climate Summit, announced with European Commission President Ursula von der Leyen. They agreed to negotiate a steel-centered treaty to remove certain tariffs. Its press release-announced premise was (a) defining higher-quality grades of steel as “dirty steel” because they are high in carbon content and (b) stopping the import of such “dirty Chinese steel” into Europe, by (c) replacing those imports with low-carbon, lower quality grades of “clean U.S. steel”!

The director of the UK government’s Green Finance Institute, Rhian-Mari Thomas, informed Bloomberg News Green, that “This is the finance COP”; and the political leaders there are all imploring the “private sector”—i.e., City of London and Wall Street—to take over. Carney, in his presentation Nov. 3, claimed that $130 trillion in investment capital has been promised (his figure had been $100 trillion in a Bloomberg News article just two days earlier, so hyperinflation may have hit here, too), committed under certain rules to ensure cut-off of new fossil fuel investments. Carney claims to have 35 of the 50 biggest banks in the world signed up to his and Sir Michael Bloomberg’s Glasgow Financial Alliance for Net Zero (GFANZ). All the big City of London, Wall Street and Frankfurt banks have joined GFANZ. 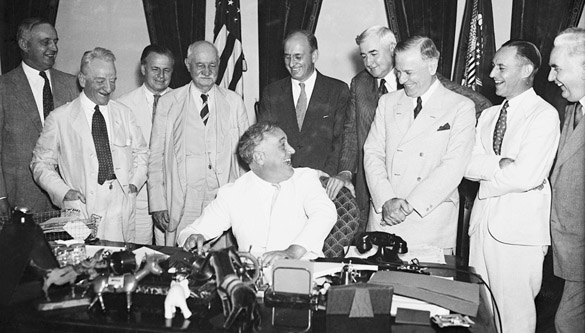 LoC
The best resistance against the Green New Deal is a good offense: Break up the Wall Street and City of London banks with Glass-Steagall Acts in every major nation. Here President Franklin Roosevelt (seated) enjoys signing the Banking Act of 1933 (the Glass-Steagall Act).

Power of a Timely Glass-Steagall Act

The Prince of Wales’ panzer divisions of one-percenters have two problems. The first is that those 35 megabanks in GFANZ do not include any Asian giants, from China, Japan, India or South Korea—nor, of course, any Russian financial institutions. In an extraordinary blast November 3 in Global Times, the Chinese Communist Party said that India’s Prime Minister Narendra Modi had betrayed the poor of India by making any kind of zero-carbon pledges at Glasgow. The editorial made it crystal clear where China itself stands: Economic development and fighting poverty come first, not “climate.” This was the most powerful statement yet made on behalf of Asia, Africa and Ibero-America, that the urgent need for industrial and agricultural development is not to be sacrificed to any “climate agenda” of the British royals and their 30 years of Earth summits.

Secondly, new “green finance” investments dominated by wind parks and solar farms look good only on glossy paper. Already on Nov. 2 at Glasgow, BlackRock, Inc. Chairman and CEO Laurence Fink said that “deploying that capital is going to be far harder than securing the commitments.” On Nov. 3, Carney acknowledged it: “There needs to be some—only some, limited—financing for a transition. And there have been problems with the transition.” He meant: Taxpayers must finance the transition of energy companies from fossil fuels to so-called renewable power sources, battery storage schemes, green farming schemes, etc.

And again Nov. 4, when Carney claimed in his Glasgow speech that the pot behind him had $130 trillion in it: “The money is here—but that money needs net zero-aligned projects.”

Carney told Bloomberg News in a Nov. 1 interview that the banks in GFANZ want “a wholesale rewiring of the global financial system so that every financial decision takes climate into account.” These are dreams of central bank control as seen historically only in the Nazi militarization of the German economy of the 1930s, driven by Hjalmar Schacht, the Currency Commissioner and President of the Reichsbank, with his “MeFo bill” mass currency printing.

Like Schacht with Hitler’s armaments drive, what Prince Charles, Mark Carney et al. do not have, is new technologies for “green finance” to invest in that are productive for any population, or energy-dense, or reliable; or which populations will tolerate. The current global energy chaos, euphemistically called “supply chain problems,” has already been enough to demonstrate that.

And Carney’s GFANZ doesn’t have real banks! Instead, it has immense “zombie banks.” Loaded by their central banks with trillions in deposits, these banks speculate with half and don’t lend with the other half. The entire American banking system of some 5,000 banks, for example, has assets in securities and derivatives speculations which equal nearly 40% of their $17.6 trillion in deposits, because the biggest Wall Street banks have nearly half of their $12 trillion deposits in speculative assets.

These banks look at “green finance” as the immense new, super-profits financial bubble which will let them survive the collapse of the $275 trillion “everything bubble” of debt ready to blow out now. That’s why Carney and Bloomberg and others claim such huge and constantly growing figures for “green” financial investments “necessary for the transition to net-zero” carbon.

The best way, then, to make the wheels fall entirely off Prince Charles’ and Mark Carney’s $130 trillion green finance mobilization to try to hurry us to our deaths, is to go right at those City of London and Wall Street banks politically. The best resistance against the Green New Deal is a good offense: Break up those banks with Glass-Steagall Acts in every major nation. 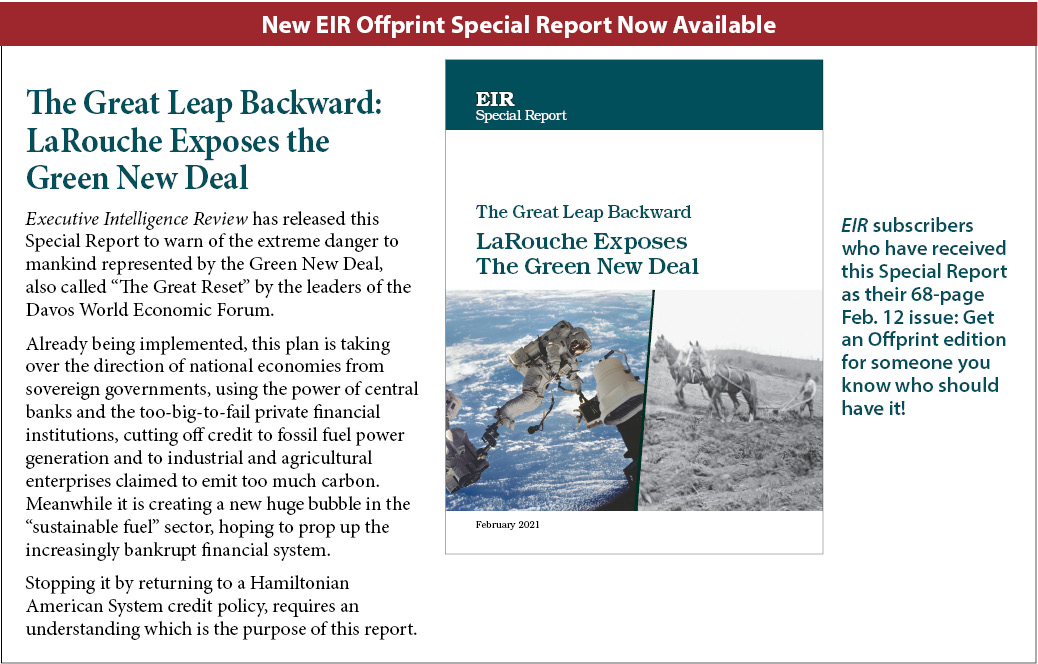 Special Report is available in soft cover printed copy for $30 plus shipping, or as a PDF for $20 (requires e-mail address).
https://store.larouchepub.com/product-p/eirsp-2021-1-0-0.htm